Seattle Architects Look For Designs, Materials That Sets Them Apart

From the Amazon spheres to the F5 Tower, Seattle’s architecture doesn’t disappoint.

But behind all those dazzling lines and PNW vibe lies complicated strategies that balance LEED requirements, coworking amenities, millennial preferences and, of course, cost of construction. 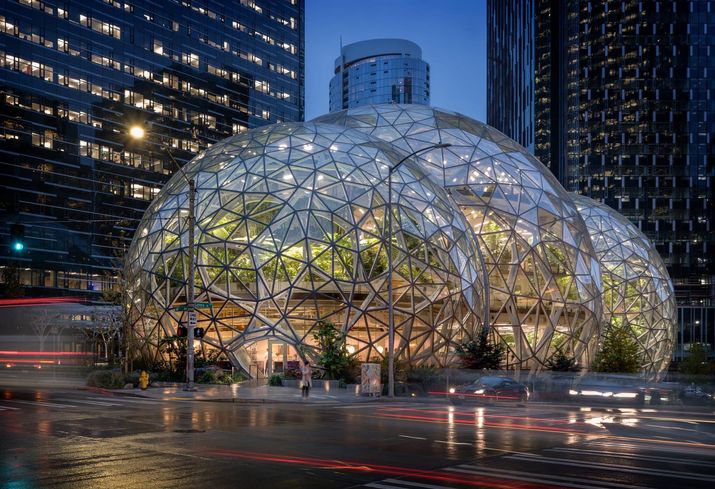 Courtesy of Aaron Leitz
Amazon's Spheres in Downtown Seattle at dusk, with Willmott's Ghost on the first floor.

Brad Hinthorne, architect and principal at Perkins and Will, said architects in Seattle are trying to differentiate themselves by using different products and designs, all while trying to decipher what the market wants. Perkins and Will will be represented at Bisnow's upcoming Seattle Architecture & Design event on Feb. 25.

“In office, the trend is towards coworking and flex office space,” he said. “But it’s also about the healthcare industry. Everyone is trying to find that crystal ball, everyone is concerned about rents, and cost control and energy efficiency.”

It’s also becoming more about placemaking, which features areas of outdoor space where communities gather. Both developers and architects need to think about how people move through spaces to interact. Pathways and connections to the sidewalk are all important components that architects consider when designing the space around the buildings.

The projects featured at the exhibit included the 2+U building, which has a covered area under the cantilevered building and connects downtown to Pioneer Square and looks out over Waterfront Park. Yesler Terrace, a 30-acre redevelopment, includes trails, community gardens and a streetcar that connects residents to surrounding communities.

Another popular trend is mass timber, also known as cross-laminated timber or CLT, which can now be used as a first-choice material after a bill supporting its use, SB 5450, passed into law. Washington is the first state to allow the material to be used in buildings without first pursuing alternatives. The building code now allows for CLT to be used in buildings as tall as 18 stories.

Though cross-laminated timber is not cheap itself, the labor is less expensive. It requires half the number of construction workers required on-site. It also has a rapid learning curve and doesn’t require highly skilled laborers, such as ironworkers. The cost savings come in the form of repetition.

Cost savings is important, especially to architects who act as the middlemen between what consumers want, what works with the codes and constraints, and what developers are willing to put into construction. That’s not an easy position in which to be.

“The cost of construction in Seattle continues to go up,” Hinthorne said. “As this cycle matures, we all need to be thinking about what we build and how much we should build.”