Whether Automation Or Communication, Technology Is Changing The Requirements Of Building Design

Technology is already having a profound effect on how buildings are designed, built and occupied, but perhaps the most interesting part about discussing the effects of technology on the built environment is what could be waiting around the corner.

"There's so much opportunity, it's really going to be hard to see exactly where the road will take us," said Kamala Subbarayan of Google's Real Estate and Workplace Services.

There are going to be far-reaching changes and the industry will have to pivot to be successful, she said at Bisnow's recent Bay Area Architecture & Design Lunch & Learn event in San Francisco.

"Just to know that that's going to evolve is going to be the key," she said. "It's about change management, too."

One of the biggest transitions happening now in the design space is how technology is changing the way architects and engineers work.

"Technology is allowing architects and engineers to spend more time doing what they really should be doing, which is coming up with the ideas, coming up with the concepts, really focusing on design," Microdesk CEO Mike DeLacey said. "[It's] taking away a lot of the repetitive tasks they might be stuck doing now or certainly doing in the past."

Technology becomes part of the decision-making process, Subbarayan said. It is not just about delivering real estate services, but also about gathering and using data and analysis in real time to drive the right decisions based on that data.

"We want each of our decisions to be learning from the past, to be taking user input in real time and building upon that," she said.

Real time has become a buzzword in the industry, said Adam Nakagoshi, regional design technology director for Gensler's Northwest Region. Design teams at Gensler can be found designing on the fly using virtual reality and making updates in real time.

The use of that data also helps to drive internal collaboration between Gensler offices around the world and has potential for much more. Nakagoshi said the company has a large digital real estate portfolio, which includes projects that never got off the ground. The hope is to use all of that data to train the company's system to recognize what was successful and what wasn't and use that insight to inform future projects.

It is not just finding ways to use technology internally to move a company forward through faster, more efficient design, but there is also a need to create new ways to share information with other disciplines during the design process, Thornton Tomasetti principal Hassan Ally said. Innovation in each discipline will drive innovation in others, and communication between disciplines will be an important element in furthering technology adoption and driving the industry forward, he said.

Technology is making it easier for building users and owners to visualize how a building will come together. Virtual reality, which helps move beyond the blueprint, is driving democratization of building plans, DeLacey said.

For example, operations and maintenance personnel might step into a VR simulation of a space to decide where equipment should be placed early in the process.

"All of those things make the product better and ... get the people using the building more engaged," he said.

The success of technology is in how it makes the user experience better, Subbarayan said.

"If you have to work for it, it's of no value to you," she said. "Success of all these technologies is going to be driven by how much they simplify one's experience."

With these advantages come some challenges, particularly as companies push the envelope on what has been done so far.

The construction industry has had a pretty set process over the years for how to design and build a new building. Add new technology, and it removes that predictability, DeLacey said.

That's why it is important to make sure the project team has bought into the process and the use of the new technology — and that there are people on the team who have experience with that new tech to mitigate risk, he said.

And while growth is often measured by adding employees, much new technology is deflationary as it brings more speed and productivity to companies, Ally said. A company will have fewer engineers and be producing more. He said that increased productivity is a good thing, but it is still not clear what that will look like in the future.

The pace of change will continue to accelerate and demand new innovation as cities grow and climate change spurs more design changes.

Even without the robots, companies have to stay on top of new technology to stay ahead.

"I don't think we'll all be replaced by a droid or a robot, but there is a risk of someone being able to do it faster, more efficiently," Nakagoshi said.

View a slideshow of the event below. 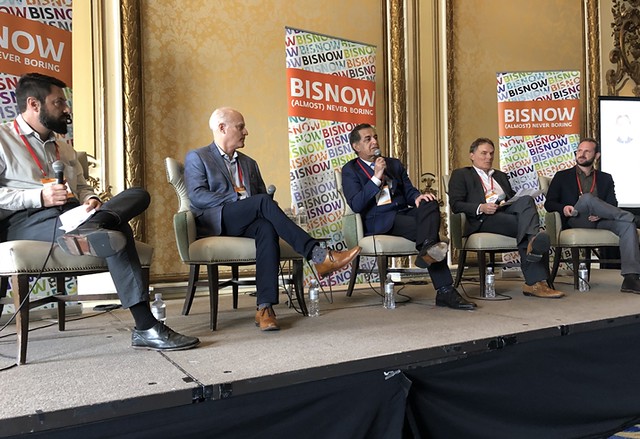