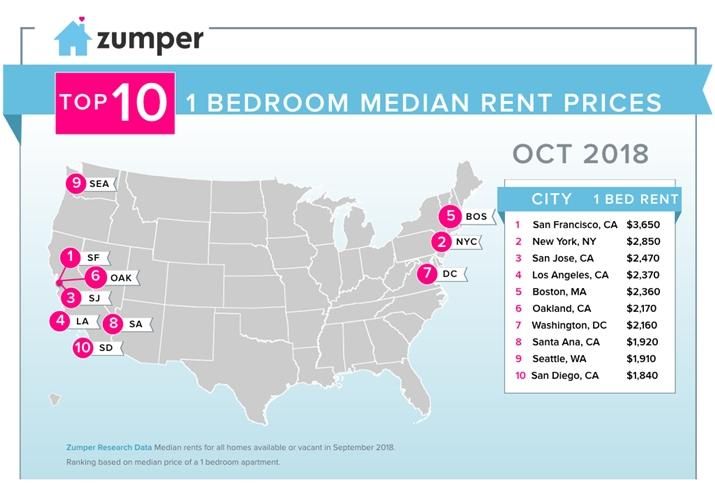 San Francisco rents continue their upward climb, hitting an average $3,650/month for a one-bedroom apartment for October — remaining the highest in the nation, according to a new report.

Two-bedroom apartment rents in San Francisco were up 6.7% to $4,800 — more than $1,500 more a month than comparable apartments in the other top markets.

The numbers are part of the apartment listing firm's latest national rent report, which looks at 100 cities across the nation. Nationally, one-bedroom rent is up 1.6% from a year ago to $1,211 and two-bedroom rent is up 3% to $1,443.

Six of the 10 most expensive cities were in California, where affordability is a constant conversation as cities look for ways to encourage more affordable housing while many continue to fall far below the level of housing required by the state.

Also factoring into the discussion is the push to repeal Costa-Hawkins Rental Housing Act, which puts limits on rent control. If Costa-Hawkins is repealed, cities could put their own rent control ordinances in place, which advocates say would create more affordable housing while opponents argue it would discourage new housing projects to bring more units on the market. That decision goes before voters in November.