New Bay Area Housing Law Is Both Polarizing And Sweeping

Lauded by nonprofits as a game changer and decried by some brokers as a nuisance, a new law gives a handful of San Francisco nonprofits first and second dibs on most multifamily properties hitting the market. 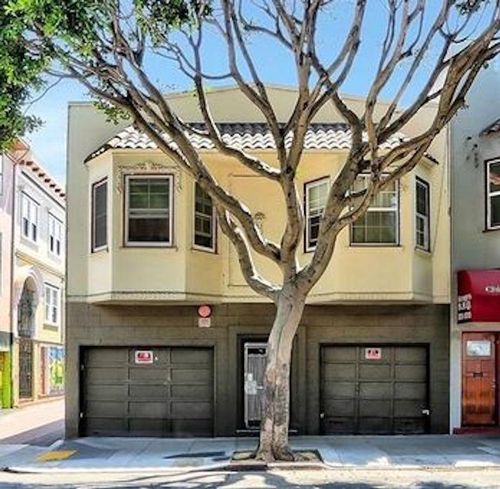 Courtesy of IMPACT
3225 24th St., a four-unit property acquired by MEDA in January and the first pure COPA transaction.

Passed in June and in effect since September, S.F.'s Community Opportunity to Purchase Act gives eight qualified nonprofits the rights of first offer and first refusal on properties that have or could eventually have three or more residential units.

Nonprofits and seasoned San Francisco investment sales brokers each have their disagreements with the policy, but COPA involving hundreds of listings per year probably isn't one one of them.

“It’s quite a sweeping law when you think about it," Mayor's Office of Housing and Community Development Project Manager Caroline McCormack said during a recent webinar on COPA hosted by urban policy think tank SPUR. "Any building or vacant land [with] three-plus units is a big swath of properties."

COPA is complementary to San Francisco's Small Sites program, which itself is a loan program administered by the MOHCD. It's also another way for the city to pursue its anti-displacement goals, according to McCormack.

Per COPA, before a seller can market a property to private investors, they must first notify the list of (currently) eight designated nonprofits, giving those organizations five days to notify the seller of their intent to consider making an offer.

The nonprofit then has 25 days to make its own offer, which the seller can either accept or reject. If they reject, the nonprofit will eventually get a chance to exercise their right of first refusal, buying the property on terms offered by a private investor and accepted by the seller.

COPA mandates that nonprofits making such an offer have at least 60 days to release contingencies and close escrow.

The law's most recent flash point happened at the end of 2019, when Veritas, San Francisco's largest residential landlord, was pushed by City Supervisor Dean Preston to delay a 76-building portfolio sale beyond the timeline called for by COPA.

Lamont said TNDC and a few other qualified nonprofits became aware once a broker alerted them to the notices, with TNDC itself responding to notices for six of the Veritas buildings.

Neither Preston's office nor Veritas responded to requests for comment.

Nonprofits, several of which said they are optimistic about COPA's potential, say that they have been unequipped to field the number of COPA notices they get on a weekly basis.

Between September and mid-April, qualified nonprofits like Mission Economic Development Agency and San Francisco Housing Development Corp. received over 150 COPA notices, according to MEDA. Thus far, nonprofits have put only seven properties under contract through the COPA process, according to Richard Hurlburt, founder of IMPACT, an affordable housing brokerage. 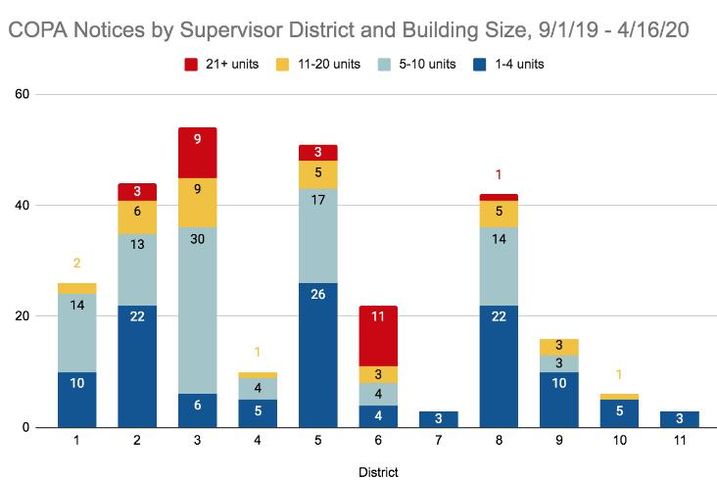 Courtesy of Mission Economic Development Agency
The number of COPA notices since September, broken down by district and number of units, per the MEDA Evaluation Team.

“For me, it’s really about the potential more than the actual thus far," SFHDC CEO David Sobel said. "We have fairly ambitious goals of taking on about 10 properties over the next several years through the Small Sites program, and the COPA legislation will enable us to compete for those properties in a much more meaningful and impactful way.”

Tenderloin Neighborhood Development Corp., a qualified nonprofit that typically develops and invests in communities of well over 20 units, has issued offers on two buildings since September, both of which were rejected, according to TNDC Director of Housing Development Katie Lamont.

“One challenge has been the volume of stuff that comes through and having a system for looking at it," Lamont told Bisnow.

Lamont said she isn’t certain whether TNDC received notices from owners of those properties finding a buyer they want to sell to, which would give TNDC and other previously interested nonprofits a chance to exercise their rights of first refusal.

Like Sobel, Lamont said she sees COPA as an important affordability preservation tool that has yet to reach its full potential. It would be one thing if COPA took effect early last decade, when city funding for preservation was really lacking, but that is much less the case now, Lamont said.

"I remember touring [a portfolio of buildings in 2012] and being like, ‘This is hopeless, this place is just crawling with institutional investors,'" she said. "Now, we’re in a different situation, where there is money."

Most state and city money continues to go toward ground-up development, but the city has begun earmarking more toward preservation, Lamont said.

For instance, upward of $30M of the $600M housing bond passed by S.F. voters last year is going toward the preservation of existing affordable housing.

Thus far, one of the more prolific champions of preservation — and active users of COPA — is MEDA, which is behind six of the seven properties to go under contract through COPA.

Before COPA, MEDA, a Mission District-based organization focused on preservation affordability for low- and moderate-income Latino families, had apparently missed out on off-market opportunities to do so, according to Associate Director of Community Real Estate Johnny Oliver.

Then COPA triggered an inundation of notices, revealing to Oliver and MEDA that S.F. previously must have had a good deal of off-market listings that never reached its Multiple Listing Service, Oliver wrote in a recent blog post on COPA.

“Other communities and municipalities need to look at this model,” he told Bisnow. “COPA ensures that a [nonprofit] such as MEDA has an opportunity to put its best and highest offer through.” 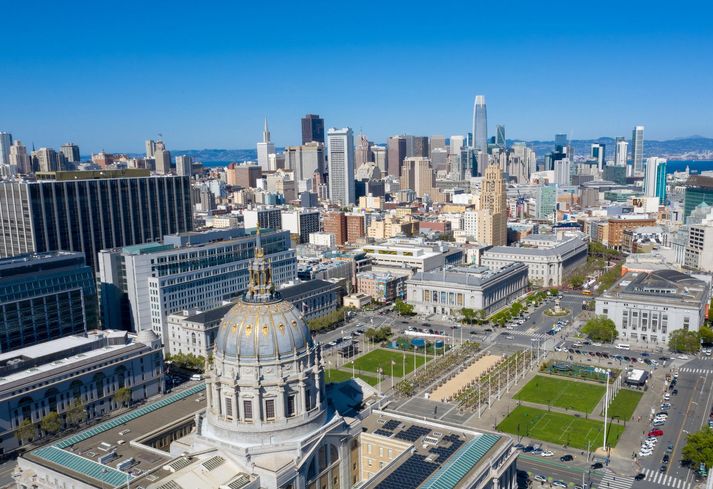 Some in the brokerage industry believe that opportunity was already there, and that COPA is slowing San Francisco's brisk multifamily investment market.

“There’s been very little activity for [qualified nonprofits] to actually get excited about," Marcus & Millichap First Vice President of Investments Clinton Textor said. "We’re using a sledgehammer to put in a little nail.”

For Textor and other multifamily brokers, there is the dwindling interest in buildings that ostensibly might appeal to nonprofit investors and thus possibly be subjected to a right of first refusal, Textor said.

Given time sensitivities, 1031 exchange buyers, too, have especially avoided such properties, according to Textor and Marcus & Millichap First Vice President Ramon Kochavi, who both estimate that, pre-COPA, 90% of properties hit the MLS anyway.

“Our job is to create the highest price for our seller," Kochavi said. "If buyers don’t participate, it’s very hard for them to push the price up, and that’s not really fair for the seller. You made a law to find [qualified nonprofits] 10% of the deals, and they’ll buy a half-percent of those ... OK.”

Textor also said 30 days still often isn't sufficient time for nonprofit investors to conduct due diligence of buildings, which involves a list of tasks including building inspection and tenant income verification. Not all owners are fans of their tenants being subjected to those tasks.

Hurlburt, who represents MEDA through the COPA process, said he sees things differently. The law is imperfect, but features like the timeline afforded to nonprofits represent a compromise with the real estate industry, he said.

Other local governments that have or plan to have tenant opportunity to purchase laws, like Washington, D.C., or Oakland, call for a more protracted process. San Francisco's use of nonprofits that are set up to move more quickly is meant to enable less of a delay.

As of now, some nonprofits said the next six months of COPA will be telling, as it weathers the current market-wide uncertainty brought on by the coronavirus pandemic. SFHCD's Sobel said COPA will give it and peers more of a fighting chance for distressed assets coming to market as a result of the downturn.

Textor and Kochavi said that right now, they see COPA mostly as a nuisance without serious effects on the market. Should nonprofits start exercising their right of first refusal, that could change. So far, none have, Hurlburt said.

A more pressing issue is market sentiment, according to Kochavi.

“If the nonprofit wants to buy, by all means," he said. "Right now, if I can get anybody to buy at an aggressive cap rate and close escrow and they have a lender in tow, by God, they can have the deal.”