'They'll Do Extremely Well': Meet The 'Luxury' Hostel Coming To The Tenderloin

Hawkins Way's strategy for Found, which has locations operating or under development in 15 cities, positioned it unusually well to enter the notoriously high-barrier-to-entry market that is San Francisco, according to Managing Partner Ross Walker, who is also a co-founder.

When it comes to San Francisco's Found Hotel, which will offer private and shared accommodations starting at $65, the result is immediate sizable market share in San Francisco's hostel market, according to Walker, who doesn't mince words about his thoughts on the competitive landscape.

"Of the new generation of hostels, we are the only one in San Francisco," Walker said, considering players like Freehand, Generator and Found part of a new era of hostels. "Every other hostel in the city is run-down."

In fact, the city does have a decent number of hostels, according to San Francisco Travel CEO Joe D'Alessandro. And a few, like Hostelling International's three locations and USA Hostel's one, have glowing online reviews. But given the limited existing supply and Found's (self-labeled) "luxury" offering, the new entrant is in a good place, D'Alessandro says.

"San Francisco runs one of the highest year-round occupancy rates in the nation for hotels across the board, and visitors want a variety of different things," he said. "I think Found will find a great niche in San Francisco and do well in the market."

A Hawkins Way affiliate acquired its new Found Hotel, located at 140 Mason St., in 2014 for $5.6M, according to real estate data site Reonomy. The company eventually spent about $7M on a gut rehab of the property, previously occupied by San Francisco International Hostel, Walker said.

"The prior occupant got maybe two to three stars on most review sites and had horrible customer service from what I could see," said Dave Piccolo, assistant general manager for Hostelling International's downtown S.F. location. "And it made money."

"It's really difficult with the demand out here not to make money," said Piccolo, whose hostel is just a block away from the new Found Hotel. "Everything else could be sour, and you're going to do alright. Found is much better than that."

Like its other locations in cities like Boston and Chicago, Found Hotel at 140 Mason St. will offer guests room qualities and amenities not found with most hostels. Along with 226 beds spread across 75 rooms (from private to three bunk beds), the new location features a ground-floor bar and restaurant (opening in December), with food and beverage offerings curated by Los Angeles-based company The h.wood Group.

Unlike other existing locations, the newest Found hotel will serve as a kind of amenity for non-occupants, according to Walker. In Found and its sub-brands, Hawkins Way hopes to create a "co-lifestyle" hospitality brand.

For example, Found Study residents — or their friends and family — get discounted Found Hotel rates. Being so close together, the company's Bay Area trio will be a first of its kind in any market for Found, which Walker and fellow Hawkins Way Managing Partner Karan Suri established in 2017.

Through aggressive but methodical growth, Hawkins Way, which said it and affiliates have raised $500M, hopes this loyalty program builds on itself. Depending on the discounts and other benefits, every new Found location affords a customer somewhere else in the country slightly more value for being one.

In S.F., before Hawkins Way opened Found Study at 16 Turk St. last month, it found ample demand through two student housing value-add projects, Walker said. From there, their focus has evolved to "not just students and schools who needed affordable housing, but just millennials in general."

Hawkins Way's use of its Found brand for its latest S.F. student housing project has shown good early returns. Through a combination of leases directly to students and master lease agreements with unnamed schools and institutions, Walker expects Found Study to be fully occupied by the end of the year.

Across the Bay, construction is underway on Found Residences at 584 14th St. in Oakland. An affiliate of Hawkins Way purchased the building, once the site of the Sutter Hotel, in 2017 for about $12M before starting extensive renovations Walker says will total about $6M for the co-living development.

Across the street, and in contrast to Found Hotel, Hawkins Way also has a more traditional dual-branded Marriott hotel that has been under construction since July.

Even so, Walker is optimistic about the market potential for hostels and compares the niche asset type's growing institutional attention in the U.S. to that received by co-living. For instance, Hilton recently revealed a new hostel-inspired brand. In addition, European hostel powerhouse Generator just purchased hostel operator Freehand Hotels and its growing list of U.S. properties for $400M.

So, in Uptown, where once there was a longtime single-room occupancy hotel with shared bathrooms, there will now be a co-living community with private rooms with their own bathrooms, communal kitchens and laundry rooms on each floor, coworking space, a fitness center and ground-floor retail.

Likewise, in the Tenderloin, San Francisco will get a rare new hostel, and a new type of one at that.

Overall, in the growth plans for Found, which is nearing 4,000 beds and 2,000 units across its sub-brands, San Francisco is not a bad market to include, according to Piccolo.

"We're doing great, and the addition of Found isn't going to affect that," Piccolo said. "It's a huge market out here." 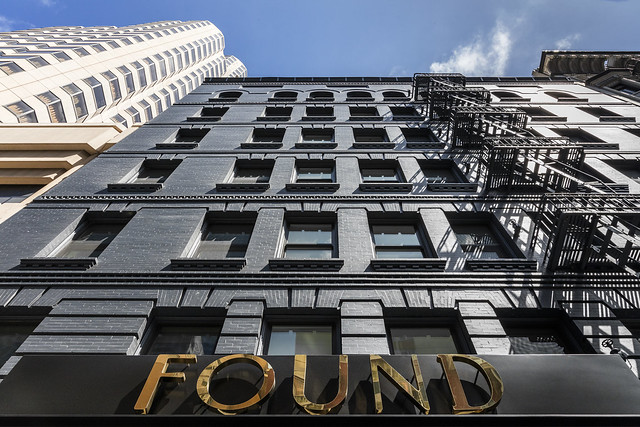