S.F.'s FiDi Finally Has A Business Improvement District. But Will That Solve Its Dogged Street Issues?

It took over a decade, but San Francisco's new downtown business improvement district has officially gone into effect. 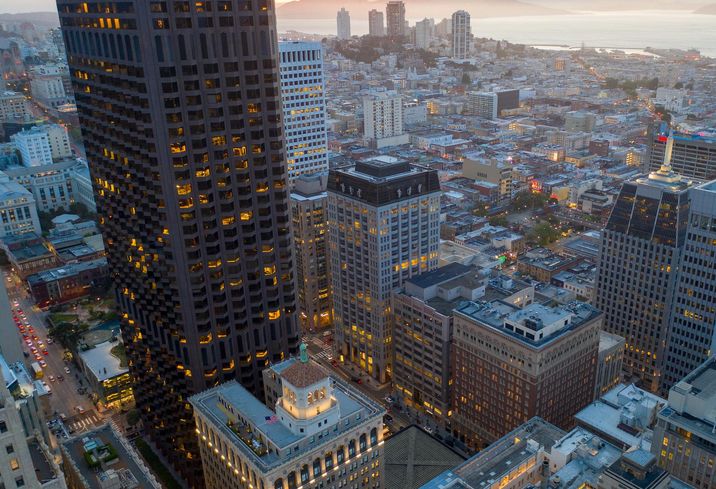 Courtesy of Droneshot
555 California St., which is owned by Vornado, and neighboring buildings.

With over 70% of affected properties voting in favor and the Board of Supervisors' unanimously approving it in July, the Downtown Community Benefit District began its 15-year term on Wednesday.

Composed of 669 properties, the new CBD overlaps with most of the Financial District and Jackson Square, two historic commercial zones now readying for their nearly $4M in new taxes to go to work.

Like other recently passed CBDs, the downtown district's ultimate approval also stemmed from San Francisco's increase in homelessness and worsening street conditions. A count from early 2019 showed the city's homeless population up 17% from 2017, as other areas around the state experienced similar increases.

The area's struggle with drugs and unsanitary street conditions has reached crisis levels: A report by NBC Bay Area in 2018 found disturbingly high numbers of drug paraphernalia and human waste throughout the city’s main tourist district, including feces on 96 blocks and discarded needles on 41 blocks. Much of the 10-mile area studied was in the newly created CBD.

As a result, part of the plan for the new downtown CBD includes "responding to the impacts of homelessness and vagrancy throughout the district," as well as hiring caseworkers for the area. About 75% of its budget will go to "Civil Sidewalks/Mobility Management," an allocation that shows where property owners' priorities lie, according to New City America President Marco Li Mandri, whose firm leads special-district formation across the country. 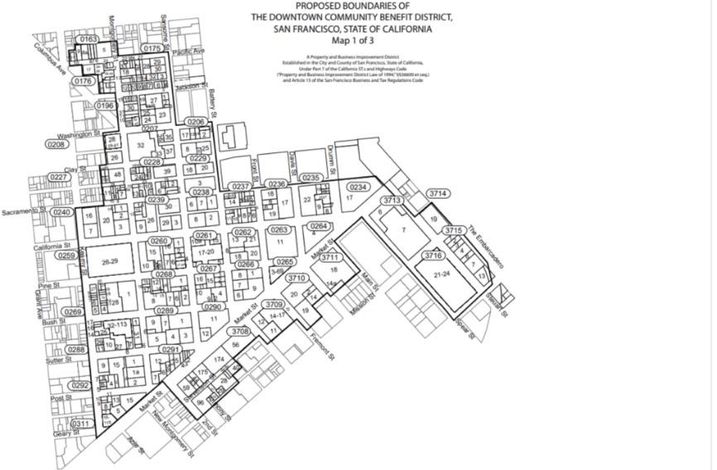 Much of the need for the downtown CBD comes down to the city's greater density and deteriorating street cleanliness, according to San Francisco Travel CEO Joe D'Alessandro.

"It's not so much from the homelessness issue as much as a street cleanliness issue," he said. "There are many more people on our streets now than there were 10 years ago, and it's harder for the city to keep up without having additional resources to help manage that all."

Efforts to instate the new CBD began in 2007, right before the Great Recession froze progress, according to Li Mandri.

In 2014, downtown S.F.'s landlords and the Chamber of Commerce had resumed talks with New City America, he said. By that point, districts for Civic Center and the Yerba Buena Gardens area had already formed (two more of the now 18 across S.F.), as had many more across the country, including in New York City and LA.

Such districts have proliferated by necessity, Li Mandri said. Many downtown business owners and landlords have found that a new layer of administration and upkeep has become crucial, and the majority in FiDi and Jackson Square were ultimately no exception.

"As areas become denser and more intensely used, cities cannot keep up with them," Li Mandri said. "The property owners thought this is something we really need to do for the longevity of the Financial District and Jackson Square. This was one of the last places as an intense commercial corridor to not have one of these districts put in place that would provide services over and above what the city of San Francisco was providing."

About 70% of ballots from property owners in a summer vote went in favor of the new CBD, including ballots from big names like Paramount Group, which owns One Market Plaza, and Vornado, which owns 555 California St. Each of those two landlords voted to annually assess about $150K on their respective properties.

In all, about $4M in revenue will come out of the Downtown CBD this fiscal year.

Notable votes against the new district included the ballots of Knickerbocker Properties, which owns 525 Market St., and the joint venture of MetLife and the Norwegian government's pension fund that owns 425 Market St.

Concerns from certain weary property owners were from fatigue over the city's current taxes, like those that came out of Proposition C in 2018, according to Li Mandri. But he says the benefits, which include upkeep of curb-to-property areas largely ignored by city governments, make the new district a worthwhile entity for its landlords.

"Whatever they're paying, they'll get much more back in value, in terms of increased rents, increased commerce for the retailers, etc.," Li Mandri said.

What property owners will pay depends on building or lot size. The Downtown CBD will assess a charge of $0.10 per SF of gross building area for buildings and $0.08 per SF of lot size for undeveloped parcels.

The district consists of about 38M SF of buildings and 69K SF of vacant lots. Total assessment revenues will gradually rise to as much as $7.6M by the 2033-2034 fiscal year because of inflation and new development.

Though about $3M of the budget is earmarked for sidewalk maintenance, like for power-washing and graffiti removal, another $750K or so will go to new marketing efforts for FiDi and Jackson Square and to fund general administration of the district.