As More Women Grab A Seat At The Table, Companies Seek To Increase Diversity

While more women hold leadership roles in the Bay Area’s commercial real estate industry now than in the past, few women own equity stakes at companies, and the industry is still working to address issues of culture, diversity and pay equity.

During Bisnow’s sold-out Bay Area Power Women event in San Francisco, several Power Women honorees spoke about what it took to get to where they are today, how much commercial real estate has changed in the last few decades and what still needs to be done to encourage more diversity. Over 40 of the industry’s most influential women were honored during the event held at The Fairmont Hotel.

She said one of the biggest challenges is not the perspective that women can’t do something or aren’t capable, it is not having as many other women to relate to in leadership roles.

Creating A Path For Women

Several honorees explained how they pushed forward into leadership roles and how shifting dynamics across the industry are allowing more women to become leaders. Even with more women leaders, panelists agreed more women need a seat at the table where they can be part of decision-making.

Salesforce Executive Vice President and Head of Global Real Estate Elizabeth Pinkham, who gave the keynote, said women shouldn’t get too comfortable in a specific role and should stretch their skills because it is easy to get stuck in a pattern.

She said she didn’t have any experience in real estate when she was asked to head up the real estate department. She said the company at the time needed someone who was well-versed in company culture and marketing that could address a need for a cohesive real estate strategy and design.

Google Executive for Design Management, Planning and Entitlement Rachel Flynn said when she started her career as an architect in New York City she was one of four women at the firm.

She said it was even less diverse the closer one got to the construction side of the business. When a position opened up in construction administration, she asked to be considered and went for it and it worked out.

When she found out a male colleague was a senior associate, she told the firm's partners she wanted to be an associate and the partners of the firm saw that she was more qualified and had more degrees than the male associate, and they made it happen.

She said men often expect to be associates and in control. Women often don’t expect it, she said, but things are changing.

“Women are expecting and demanding [more from their employers],” she said. “That is setting the pathway for other women as well.”

SFMade | Placemade CEO Kate Sofis said one of the big issues she has faced as a woman in the largely male-dominated field of manufacturing is balancing the need to be feminine or masculine. She said she originally felt like she needed to have a strong way of doing business while balancing or sometimes hiding her feminine side. She said she ended up knitting together the two perspectives.

“Where we are now in our evolution of women [in] business is it’s not about male or female. It’s about figuring out how to be you and externalize your leader style,” she said. “For me that has been one of the most encouraging paths as we move forward.”

She said building a tribe of people who are accepting of one’s authentic self and encouraging of that is important.

Eric F. Anderson CEO Kristin Anderson, who took over her father’s construction business after his death, said there are more opportunities for women in construction than before. Previously a man who ended up on the office side of construction started on the job site and worked his way up.

Now there are more opportunities for women with a background in technology or business to come into construction without having worked on the job site. She said on the trade side of things, there has been a lost generation. Following the recession, an entire generation of people didn’t go into construction.

“What is filling that void is women and minorities and all these diverse people coming in,” Anderson said. “It’s something that is unavoidable in construction. It is getting more diverse.”

What It Means To Have A Seat At The Table

Pankow Builders Senior Project Manager Taeko Takagi said it is not just about creating gender equality, but also increasing diversity and inclusion through all levels of an organization.

“When you have diversity of opinions at the table, you have a better way of problem-solving and you’re going to get more diverse and interesting solutions,” Takagi said.

City of San Francisco Deputy Director of Development Sarah Dennis Phillips said even when women are at the table they still often face being spoken over or their ideas are dismissed. She said there needs to be a continued shift in the culture at the table while women are sitting there and women need to encourage other women to speak up.

Phillips said as more female perspectives are incorporated into commercial real estate, she has noticed a shift in how the city is growing. She said most of the women she knows don’t build from ego and may come at it more from a community benefit standpoint, such as Salesforce’s Pinkham promoting the use of Salesforce’s top floor for nonprofit events instead of boasting how tall the tower is.

SmithGroupJJR principal Rosa Sheng said when she first started her career in architecture her impetus and fuel to keep going was in response to any negative reactions to her being in architecture. She said she often heard that there wasn’t a point in a woman entering architecture since she would work long hours for low pay and would just end up getting married and have kids anyway. She said she strived to make sure her career ran counter to that expectation.

She said she was fortunate to have the opportunity to design some of the first Apple Stores with their glass cubes and staircases, and one of her earliest champions was Steve Jobs, who said she deserved a seat at the table. She said there were still people with microaggressions who said she shouldn’t be in the room, but having champions was a valuable lesson.

“We need to pay it forward and speak out for those people who aren’t in the room and figure out how to get them there,” Sheng said.

Becoming A Mentor For Other Women

Pankow’s Takagi started her career in several different fields, such as architecture, development and construction, where there weren’t a lot of women and she didn’t have any women to sponsor her. She did have some incredibly strong men who always pushed her to go to the table.

“Every one of us has a responsibility to go out and be present and become that sponsor or mentor that I didn’t have,” Takagi said.

JLL Executive Vice President Lei-Lani Keelan said when she first started as a broker she was one of two women and is now one of nine women. She said she is seeing changes in the industry, which is heading in the right direction. It is only a matter of time when young female brokers become more senior brokers, she said.

“It is incredibly important for women to be champions of other women,” Keelan said.

She said change would happen more quickly if more women treated each other with respect.

Essex Property Trust’s Kleiman said she mentors about three women at any given time, providing coaching on style and communication and helping them create a career path. She said it is important to continue to push for equality and merit-based-performance promotions and pay.

In addition to mentoring other women, Takagi said recruitment, retainment and promotion are important ways to increase diversity and bring more women into commercial real estate.

“We should all look at the model in our companies and demand that in our companies,” Sheng said. “Until they address [pay equity] head on as the elephant in the room, that’s half the battle.”

Companies also need to offer better work/life flexibility for everyone and not just parents so that more people can come to work and enjoy what they’re doing while also being able to take the time off they need, Sheng said.

“We need to help more women succeed in starting and growing and becoming equity stakeholders in their businesses.”

She said there need to be more women at that level making decisions about pay equity and setting the company culture.

“We’ve done well as a nation by disenfranchising half the workforce,” Essex Property Trust’s Kleiman said. “Imagine how amazing we will be if 100% of the workforce is included.” 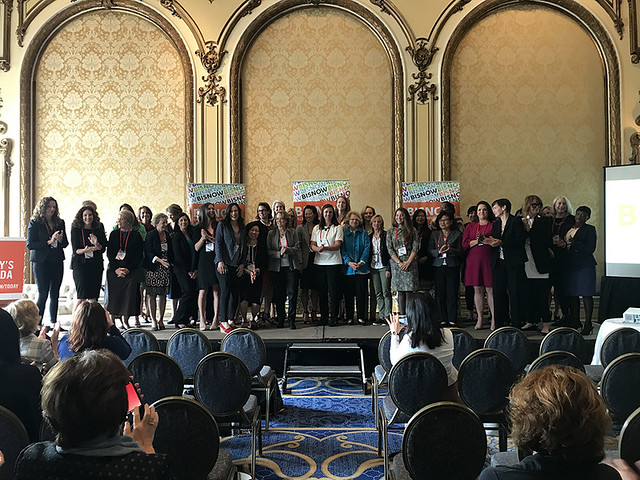