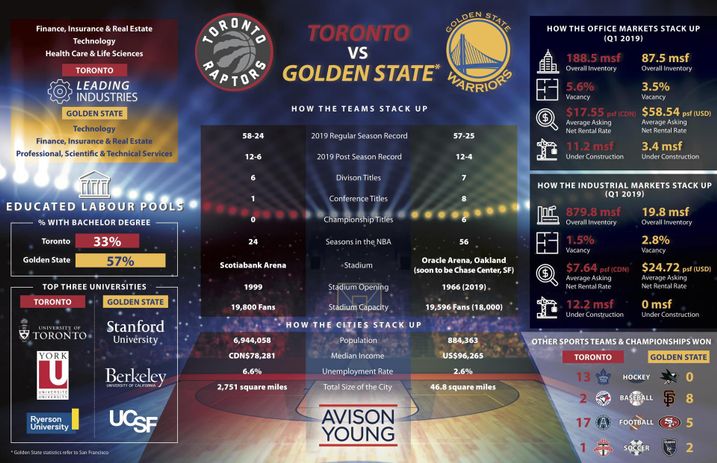 Courtesy of Avison Young
A breakdown of commercial real estate in Toronto vs. San Francisco

Technology, finance, insurance and real estate loom large as leading industries for both markets, but that is where most of the similarities between the two end.

At only about 47 square miles, San Francisco demands much higher average asking net rental rates for both office ($58.54) and industrial ($24.72) than does the GTA, whose averages come out to $13.13 and $5.72 for office and industrial real estate, respectively.

“Just like our commercial real estate and tech markets, we breed highly competitive sports teams in the San Francisco Bay Area, and the Warriors are no exception,” said Jennifer Vaux, Avison Young vice president of research in Northern California.

Toronto's 1.5% industrial vacancy rate is even lower than San Francisco's 2.5% vacancy for industrial space. The Canadian city's office vacancy rate of 5.6% is higher than that for San Francisco (3.5%), but Avison Young principal and practice leader Bill Argeropolous, who leads research in Canada for the firm, says downtown Toronto's office market is a different story.

"Downtown [Toronto] is one of the tightest office markets in [Canada] with a sub-2% vacancy," Argeropoulos said.

The Warriors organization itself is responsible for 580K SF of office inventory coming online next year in the form of its two office towers finishing up in San Francisco's Mission Bay. Uber will soon occupy that space as its headquarters, located right alongside the new home arena for Warriors basketball.

A Raptors fan, Argeropoulos isn't shy about sharing another advantage Toronto shares over the Bay Area at the moment: the Raptors' 2-1 series lead over the Golden State Warriors.

The Warriors will look to even things up Friday night in what would be their last game ever at Oakland's Oracle Arena should Toronto end up winning the next two games.

CORRECTION, JUNE 7, 3:41 P.M. PT: A previous version of this story misspelled Bill Argeropoulos' name. The story has been updated.