Okta, Gensler And Colliers On The Art Of Designing Offices For People In Them Less

The 24th floor of San Francisco's 100 First St. might be a window into the future of Bay Area office space.

There, before shelter-in-place stopped construction a few weeks early, S.F.-based cloud software company Okta was already underway on a blueprint for much of its office footprint around the world, Global Workplace Services Vice President Armen Vartanian told Bisnow. 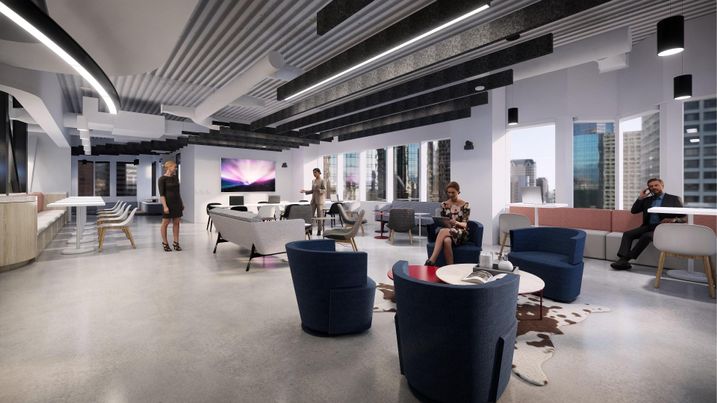 Courtesy of Okta
A rendering of cloud software company Okta's 24th floor, which is made in part for a future of increased flexible work.

For Okta, features like the absence of dedicated desks and other characteristics of floor 24 were in the cards before the coronavirus abruptly introduced a new way of working for thousands of companies. Now, they are becoming more likely by the day, Vartanian said.

"And when you think about it, people are not in the most ideal work-from-home situation," he said. "They’re dealing with the mental stresses of a pandemic, might have kids, are working from home with their spouses or have parents they may need to take care of.”

A Colliers International survey conducted in March found over 80% of employees surveyed around the globe prefer to work remotely at least one day a week; in the U.S., 45% of employees would like to work from home one or two days a week, the survey found.

The Bay Area, in particular, has found parts of its economy reasonably suited to remote work. By March 17, the first day under the shelter-in-place order, a nine-county poll done by the Bay Area Council found 63% of respondents were working from home.

To both Vartanian and Colliers Workplace Strategy Vice President Michelle Cleverdon, exactly what more remote work means for office markets like the Bay Area is a valid question, in terms of both space needs and design.

Cleverdon said Colliers has several Bay Area clients in various industries asking about "the elephant in the room of how many people even need to return to the office."

"I think this global experiment is really starting to shatter a lot of the myths about distributed work," she said.

Vartanian said he expects companies to rethink the need for having large blocks of space in expensive downtown areas, instead of smaller spaces scattered across markets to accommodate a more distributed workforce.

“Let’s say a company has got 100K SF of space. Three years from now, they may not need 100K SF anymore," he said. "They may need 20K SF of space, but that 20K SF of space definitely needs to be redesigned.”

In Okta's 24th floor, for instance, the company has eliminated dedicated desks, according to Vartanian. In their place are neighborhoods for various teams, with each team having its own "anchor point" to do things like stand-up meetings every morning. 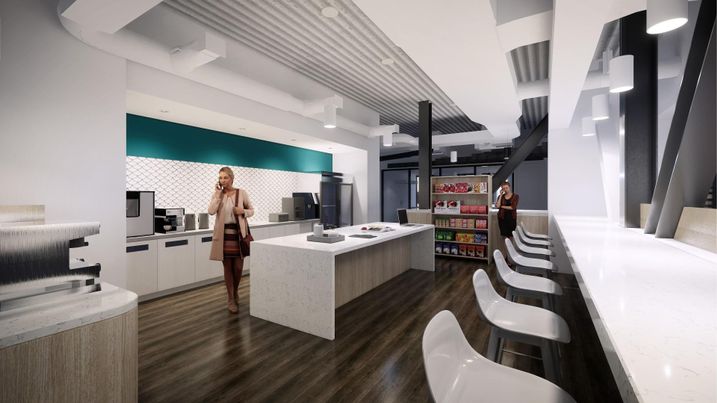 Courtesy of Okta
A rendering of Okta's 24th floor at 100 First St. in San Francisco.

“You can’t allocate a bunch of seats to people who aren’t going to be using the office every day," he said.

Additional facets of Okta's nearly complete floor include smart lockers and plenty of power- and data-enabled soft-seating, as well as sensors throughout the level to gather data that can inform future redesigns.

For others, bigger questions about structural changes that might await office design aren't quite ready to be answered.

Gensler principal Ben Tranel, who is based in the global architecture firm's San Francisco offices, said most owners thus far are focused on what he terms the bridge phase, or when office work can resume but only under strict and often changing health guidelines.

“The questions from [owners and clients] really have to do with this bridge phase and what accommodations and changes need to be made," Tranel told Bisnow.

Immediate changes to office design include allowing for 6 feet between workers and halving conference room capacity, while other precautions include the use of professional cleaning and sanitation through the workday.

WeWork, for instance, has already begun rolling out several such plans in its coworking spaces, Bisnow reported this week.

Owners may also focus more on attaining WELL certification, which is analogous to the environmental certification LEED but instead focused on enhancing building occupants' health.

In the longer term, Tranel said whatever new norms and requirements come out of the pandemic will represent an opportunity for innovation for architects like Gensler, especially on projects for the more experimental companies in the Bay Area.

"There’s a great chance for us as architects and designers to start building a better tomorrow by thinking about those everyday interactions that people have with the built environment around them," he said.