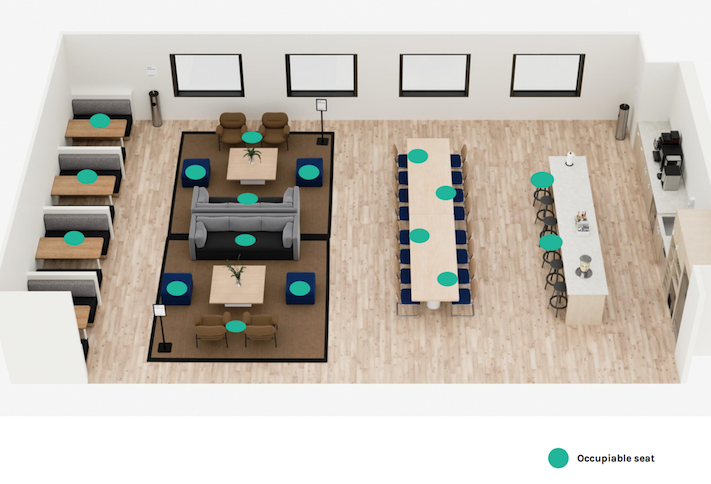 Courtesy of WeWork
An example of a WeWork lounge area with the dots representing where people can sit under new social distancing measures.

The coworking industry leader is aiming to adapt to the coronavirus pandemic by redesigning its workspaces.

WeWork last week began rolling out plans to implement social distancing measures and increase cleaning practices in its coworking spaces. It detailed the plans in a brochure to members, which a WeWork spokesperson shared with Bisnow.

The company aims to make its common areas less crowded by reducing the number of members who can sit at shared tables and limiting booth capacity to one person. It also plans to install visual guidelines such as floor stickers and monitors reminding people to keep 6 feet apart.

"By modifying shared spaces with staggered seating and buffer zones, teams can continue to operate in the workplace while still maintaining a healthy physical distance from colleagues and fellow members," the brochure said. 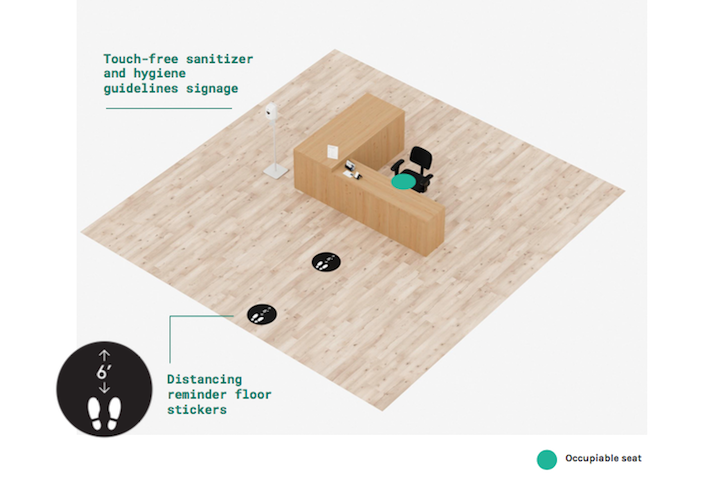 Courtesy of WeWork
An example of a community desk with social distancing measures from WeWork's brochure.

To improve the cleanliness of the spaces, WeWork said it plans to add hand sanitizer and wipe stations to spaces, and install touch-free soap dispensers in restaurants and kitchens. It also said it will increase the frequency of cleaning its spaces during the workday.

The changes come as WeWork is facing a series of challenges from keeping its members — many of whom operate on short-term leases — to paying its own rent to shoring up its financial backing. The company failed to pay April rent at several of its New York City locations, the Wall Street Journal reported.

SoftBank is reportedly backing out of the $3B tender offer for WeWork shares it agreed to last year as part of its efforts bail out the coworking giant after its failed IPO. WeWork shareholders this month filed a lawsuit against SoftBank, arguing its plan to kill the deal represents a breach of contract. Ousted WeWork founder and former CEO Adam Neumann is reportedly planning to file his own suit against SoftBank.