A developer and church are teaming up on the development of over 300 residential units in the middle of San Francisco.

Forge Development Partners said Monday that it is partnering with Fifth Church of Christ, Scientist to develop church property into a 310-unit workforce housing community in S.F.'s Tenderloin neighborhood. 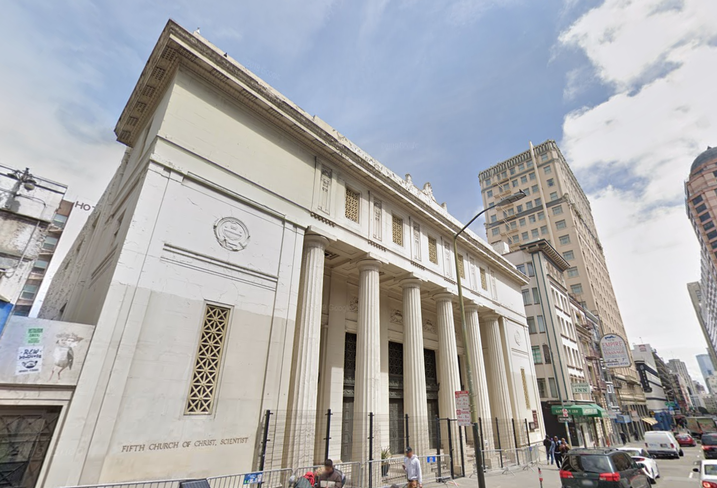 Forge's efforts coincide with others to redevelop church-owned property for housing to help address the state's housing crisis. Earlier this year, state Sen. Scott Wiener, a Democrat from San Francisco, proposed SB 899, which would give faith institutions and nonprofit hospitals the right to build 100% affordable housing projects on their property.

As a privately financed project offering units for residents earning 80% to 130% of area median income, 450 O'Farrell doesn't quite qualify for SB 899, which is geared more to nonprofit developers, Forge founder Richard Hannum said. SB 899 applies to projects where every unit is affordable to households earning 80% of AMI.

The 13-story project is being designed by Gensler, with units between 336 and 709 SF, according to Forge. Forge, a workforce housing developer, said the project will also include a 10K SF worship space for Fifth Church of Christ, Scientist and about 5K SF of retail.

Forge plans on identifying more church properties that can be transformed in a similar manner to plans at 450 O'Farrell, according to Hannum. For 450 O'Farrell, the company is looking to break ground in Q4 2020, which would allow a spring 2022 opening, he said.

"I've been working to get to this point for 35 years," Hannum said. "It took us that long to get the approvals to demolish the existing building and to build a new church."

Past false starts include one for 176 luxury units led by developer Thompson Dorfman, Hannum said. That project became less financeable as it took longer and longer to get approvals, according to Hannum. 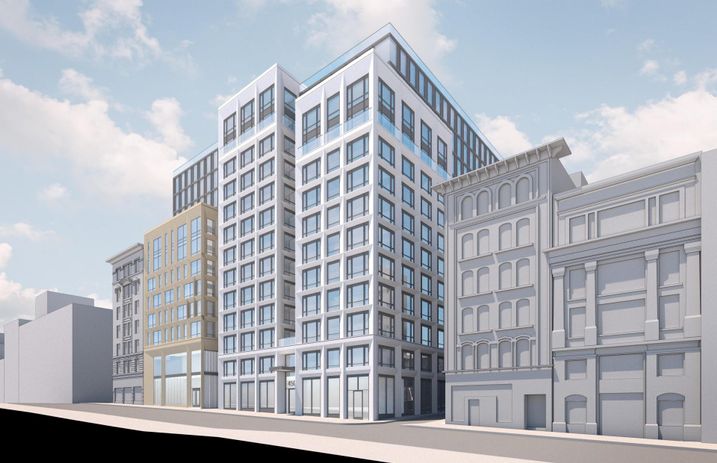 Courtesy of Gensler
A rendering of Forge's project at 450 O'Farrell St.

The model for 450 O'Farrell is consistent with other projects led by Forge in that it is to be fully privately financed workforce housing targeting households earning between 80% and 135% of AMI, Hannum said. In August, the developer broke ground on another such Tenderloin workforce housing project at 361 Turk St. and 145 Leavenworth St.

The San Francisco-based developer said its new project will include 45 units for households earning up to 40% of AMI.

Forge's project is also in part a result of ongoing work by the San Francisco Interfaith Council, which formed an essential housing task force in 2014 that works with churches to identify underutilized properties.

"We wrote a few letters to the planning commission as well as the historic preservation commission on [Forge's and Fifth Church of Christ, Scientist's] behalf, and we were really championing their effort because we felt that they could be a model that others could emulate," San Francisco Interfaith Council Executive Director Michael Pappas said.

"I think it's great. I think all kinds of housing at all affordability levels needs to be built," said Mission Housing Development Corp. Executive Director Sam Moss, who added that he wouldn't support subsidizing the kind of middle-income housing Forge is building given limited available funding for more pressing low-income housing.

"Other developers focus on just doing below market rate, or tax-subsidized work," Hannum said. "They're busy and doing a great job, so we're just doing the job that they can't do."