Tijuana's downtown is turning its tourist strip into an urban center expected to draw visitors from both sides of the border and enliven the area for residents. 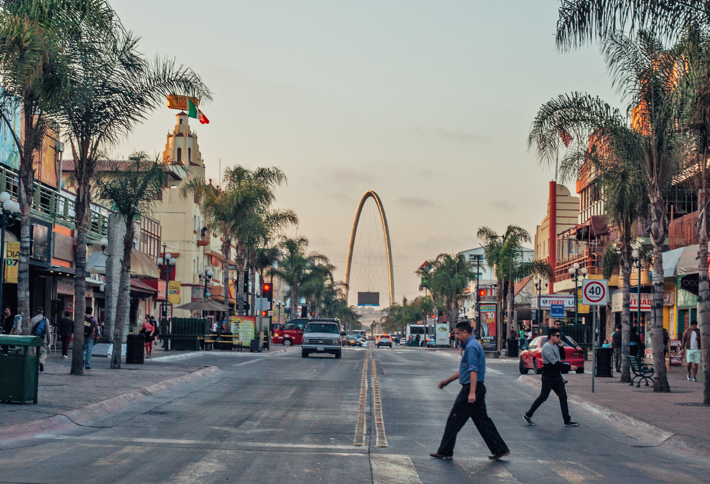 The core of Tijuana’s historic downtown Zona Centro, an area along Avenida Revolución three blocks wide and nine blocks long, is being revitalized as a pedestrian-friendly, urban center with a mix of new housing, office and retail amenities. The hope is that new projects in the central building district will serve as a catalyst for redeveloping the entire 55-block district, which is a 10-minute walk from the border.

Zona Centro had been an American tourist destination since the early 20th century, but struggled following 9/11 due to tightened border security that caused long waits at the border and a passport requirement, along with the recession, an increase in drug violence and outbreak of the H1N1 virus in Mexico. 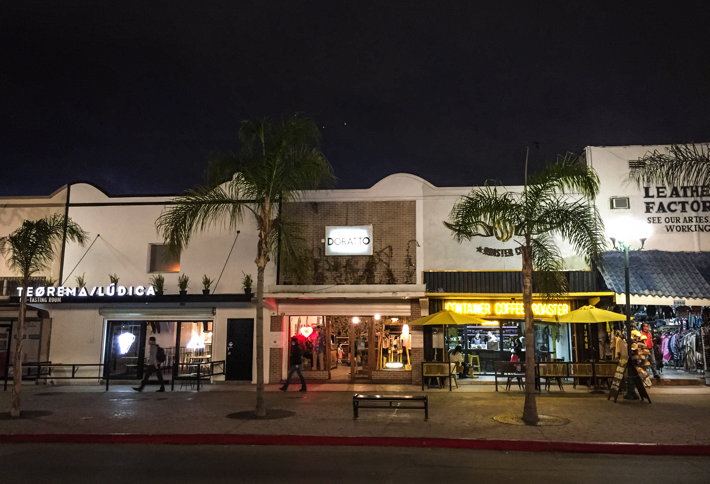 About 70% of shops, restaurants and bars along Avenida Revolución had closed or were abandoned by 2013 when the Tijuana Economic Development Council invited an Urban Land Institute San Diego-Tijuana Technical Assistance Panel to develop a plan for revitalizing the city’s central business district.

Since then 12 projects have been completed and more are in the pipeline. New urban housing, craft beer breweries, restaurants, art galleries, co-working spaces and entertainment venues are replacing taco stands, dive bars and tourist curio shops, creating the beginnings of a live/work/play community and destination for locals, as well as tourists.

“This is now the place to be for a demographic of hipsters,” said San Diego developer Greg Shannon, president of Sedona Pacific Corp. and chair of the ULI San Diego-Tijuana District Council. Sedona Pacific is in the process of building a new apartment project in the Avenida Revolución area of Zona Centro. “We are starting to get a bone structure for the cool, walkable environment Millennials desire,” said Gabriel Garzo, another San Diego-based developer doing projects in Tijuana who serves as co-chair of ULI San Diego-Tijuana’s binational committee. 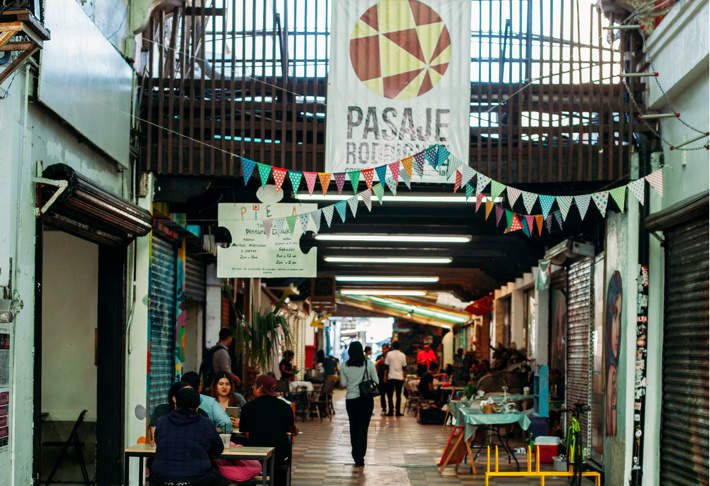 Courtesy of Bustamante Realty Group
Artists have converted the historic PASAJE Rodriguez on Avenida Revolución to an art space.

In celebration of its progress, Centro will be honored with the 2017 ULI San Diego-Tijuana Healthy Places Award on Thursday at the second annual Healthy Places Gala, where Tijuana Mayor Juan Manuel Gastélum will accept the award. The selection of Centro is interesting, as it recognizes an entire community, rather than a project or building, according to Shannon. 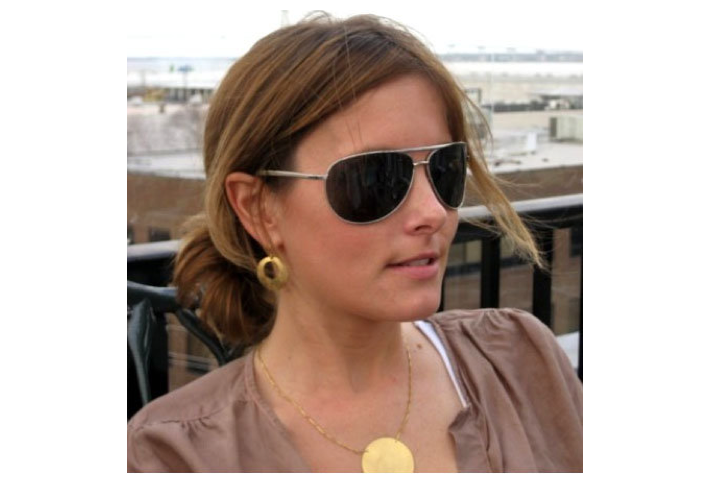 “La Revolución is an epicenter of food, design and art that is redefining Tijuana,” said Heather Foley, executive of the ULI San Diego-Tijuana District Council. “While the city’s story is far from written, progress made over the past five years is changing the way people live, work and play in Tijuana’s central business district.

"We can expect the next five years will bring increased environmental sustainability and urban vibrancy.” 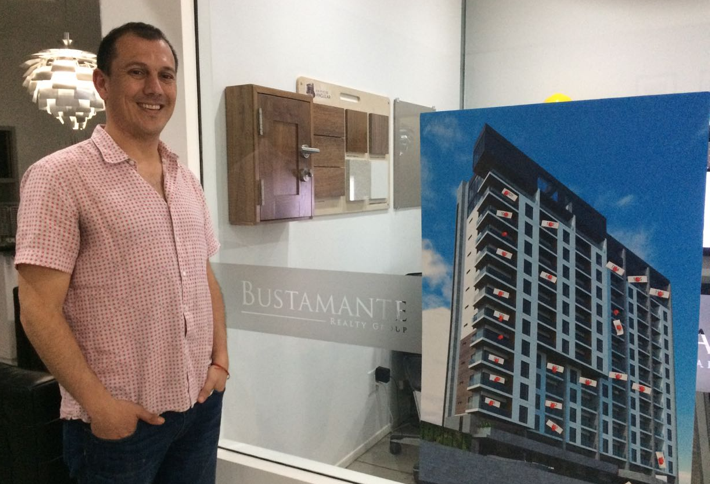 The shift began in 2008 with a new generation of locals launching grass-roots efforts aimed at making this city of 1.7 million people a great place for residents, Genaro Valladolid of Tijuana’s Bustamante Realty Group said. He said the emergence of a craft brewery culture and culinary and wine scene happened organically, with a generation of 25- to 40-somethings that started doing things to initiate a more desirable future for Tijuana, rather than settle for being an American tourist stop. 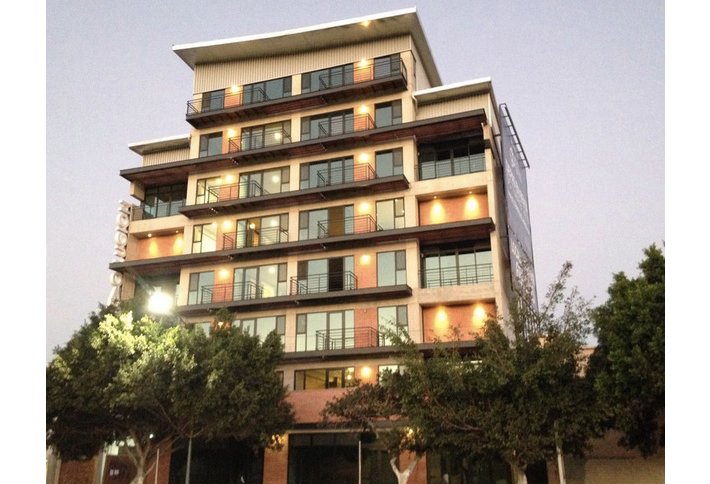 Grupo Inmobiliario Bustamante
Revolución 1764 is a 20-unit, high-end rental project in Centro, the first of three apartment buildings planned around a central courtyard.

The first major project in downtown Tijuana was 7MA Y Constituciòn, a mixed-use project developed by Grupo Inmobiliario Bustamante CEO and co-owner Sergio Rosas. Created by redeveloping a couple of rundown family properties on Avenida Constitución, which runs parallel to Revolución, Rosas’ project opened in the fall of 2014 to provide 12 loft apartments over ground-floor retail and office space.

This project, which began leasing up before it was completed, tested demand for modern rental housing in downtown. Rosas and architect Ramon Guillot followed with a high-end, 20-unit rental project, Revolución 1764, on 10th Street between Revolución and Calle Madero. 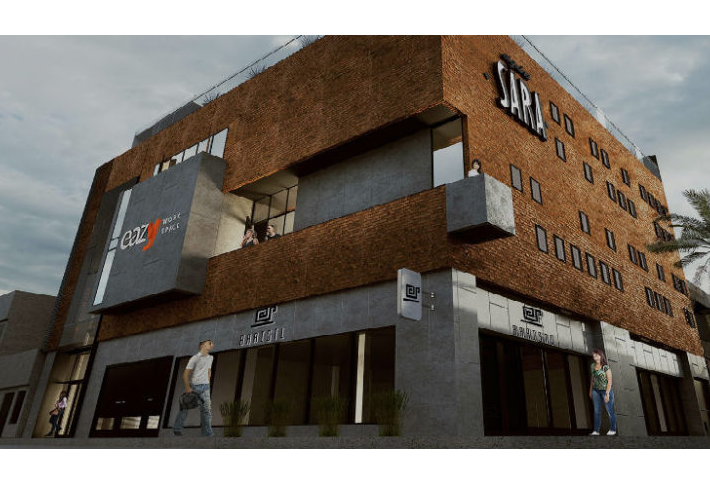 Courtesy of Bustamante Realty Group
Eazy Work Space, a new co-working facility at the SARA Building, which includes retail on the ground level and a rooftop restaurant

Other new projects followed, including the three-story SARA Building, a former department store repositioned by local developer David Saul Guakil to office and retail space occupied by Eazy Work Place, a new co-working space that opened in May on the second and third floors, and a dentist and coffee shop on the ground level. Guakil plans to put a new a restaurant on the building’s rooftop.

Another local developer, Miguel Marshall of Centro Ventures, repositioned the former 1950s customs station, Estación Federal, to a mixed-use project with apartments, office and retail. The project includes a café, a deli, a shipping container art gallery, a craft brewery and a courtyard that hosts a monthly farmers market. Centro Ventures also redeveloped the dilapidated former Mexicoach bus terminal into a co-working space called HubStation and created a series of box gardens along the Tijuana River.

Mexico City-based Cine Tonala repositioned an abandoned building near Seventh Street to a cultural center with a restaurant-bar that presents films, music, theater and standup comedy. 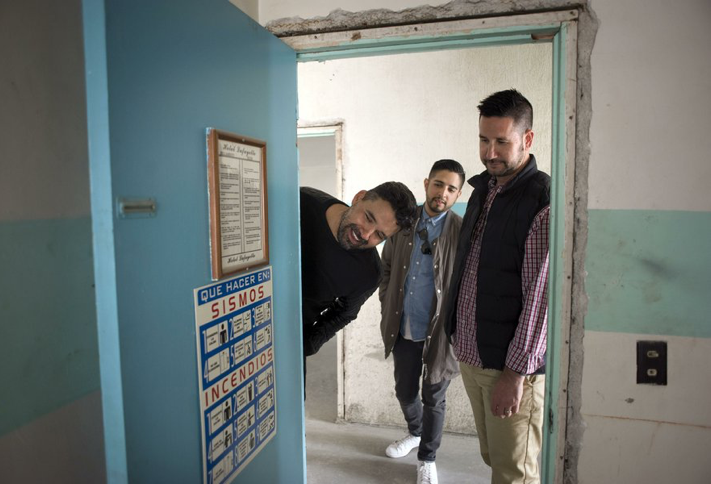 San Diego developer Greg Strangman, founder and principal of L.W.P. Group and TAP team member, recently reopened the 1940s Hotel LaFayette after a total renovation to a boutique hotel. Rebranded One Bunk, the new hotel has nine contemporary rooms with an edgy design created by architect Jorge Gracia and features a small lobby bar area and ground-floor retail space occupied by a coffee roaster, a wine purveyor, a boutique and a barbershop. 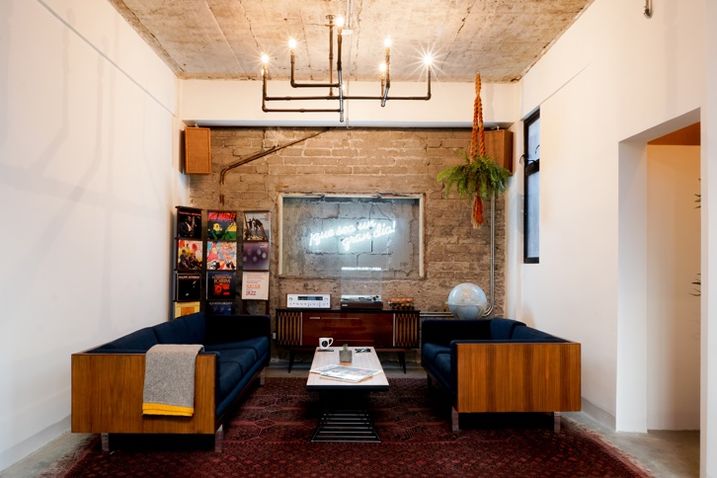 Strangman said he wanted to create a project that engaged locals and guests, inviting them to stop by for a drink at the bar, a cup of coffee or shop for a bottle of wine or other items at the boutique, which is a scaled-down version of a local designer store that sells works by artisans from all over Mexico. 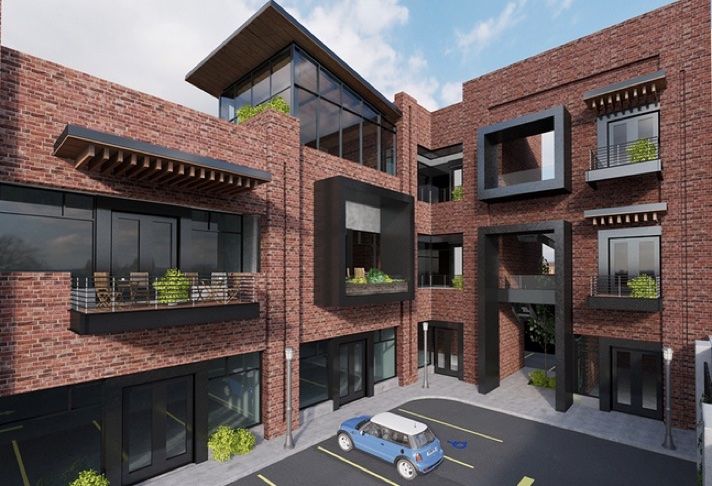 Fernanda Padilla, another developer who grew up and was educated on both sides of the border, together with local architect Raul Jimenez Susarrey, converted a deteriorated flophouse into a 17-suite office building, maintaining the structure’s authenticity and historic character to attract creative office users.

Branded Brik-10, the three-story brick building on 10th Street features a rooftop garden terrace, meeting space, a café on the ground floor and off-street parking. The project is 100% occupied by architects, furniture and interior designers and social media marketing strategists. 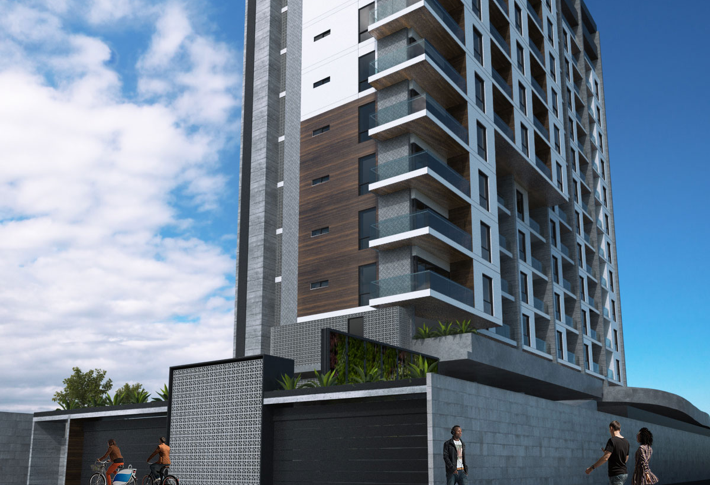 Courtesy of Bustamane Realty Group
The 16-story Distrito Revolución under construction is the first luxury condo project in downtown Tijuana.

Local developer the Cosmopolitan Group is underway on Distrito Revolución, the first-ever condominium project in downtown Tijuana. This luxury, 16-story project features terraces, a rooftop sky deck with barbecue grills and comfortable seating, and a fitness center. Bustamante Realty is marketing the project and has pre-sold 40 of the 69 units, which are selling at $125K to $175K, except for the three penthouses priced at $300K.

What’s happening in Centro has been compared to the transformation of San Diego’s Gaslamp Quarter 10 to 15 years ago, with first adopters moving downtown as investors began developing a mix of new housing and retail amenities. Shannon said Centro’s redevelopment is happening quicker because it usually only takes about a month to secure entitlements in Tijuana. 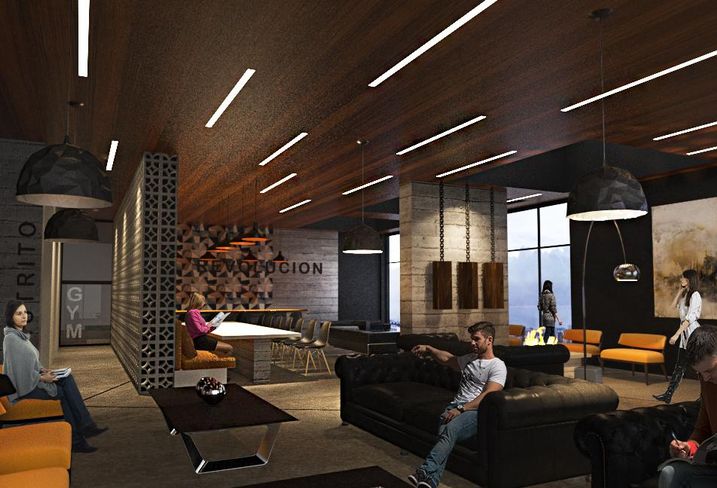 The Tijuana government is also investing in infrastructure upgrades needed to create a vibrant residential community in the central business district and destination for locals and visitors. Improvements so far include a new bridge across the Tijuana River, upgrading water and sewers, installing underground utilities, new landscaping and hardscapes along streets and expansion of mass transit, including the BRT, which will make the CBD more accessible to residents throughout the city.