About 10,000 new multifamily units have been completed, are under construction or are in the pipeline in San Diego, the majority of which are in the Downtown market and are luxury product. While developers compete for the 15% to 20% of renters who can afford rents in those new projects, two value-add multifamily investors participating in Bisnow’s 2017 San Diego Outlook event earlier this week are focused on creating workforce housing in suburban markets. 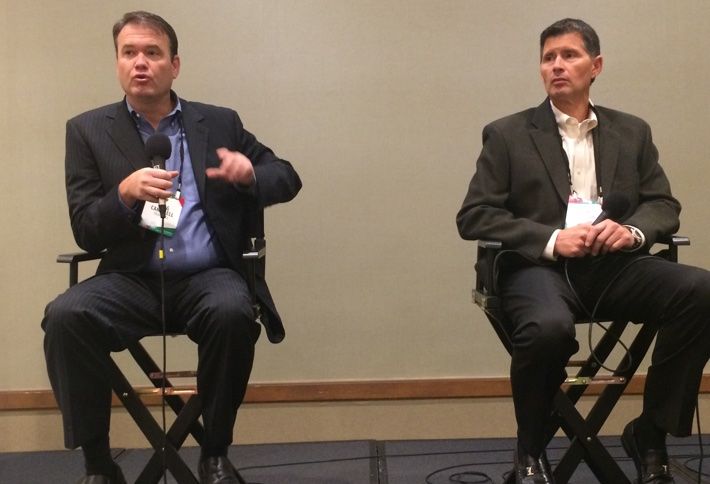 Moderator Bill Hearne, president of Hearne Construction, asked panelists to describe their perfect deal. TruAmerica senior managing director Greg Campbell (left, with Joe Anfuso) said his company looks for Class-B assets with 200 to 400 units that haven’t been renovated in 10 to 15 years, where his company can modernize units and upgrade common areas and raise rents. MG Properties CFO Joe Anfuso said his company looks for similar suburban opportunities in need of a facelift. Joe’s firm owns and operates eight projects in the San Diego region, and Greg’s company has acquired six projects over the last two and a half years.

Both agree it’s difficult to find properties that meet their acquisition criteria. “San Diego has become [a] thinly traded market, much like Orange County, for instance,” Greg said. “A lot of product down here is in the hands of a few players that are long-term holders.” Joe said his company just closed on one 185-unit property in South Bay, but it was only one deal out of $560M in acquisitions the firm did this year.

Bellwether Enterprise SVP Laurie Morfin (below with moderator Bill Hearne) said 50- to 100–unit projects rarely trade in San Diego. "Investors already in this market stay, because there’s not the instability of ups and downs like in many other markets across the country."

Bellwether is a commercial and multifamily mortgage banking company specializing in funding affordable housing for low- to moderate-income families. She said her company has funded lots of value-add deals since 2010, and likes straightforward deals with a loan-to-value of 75%, but that's not what she generally sees. Instead, clients are looking at deals that are higher in debt. "I’d say the best deals are the straightforward ones. I’m just going to ‘put it to bed’ types of deals, which used to be 3.75% and are now 4.25% to 4.5%.” 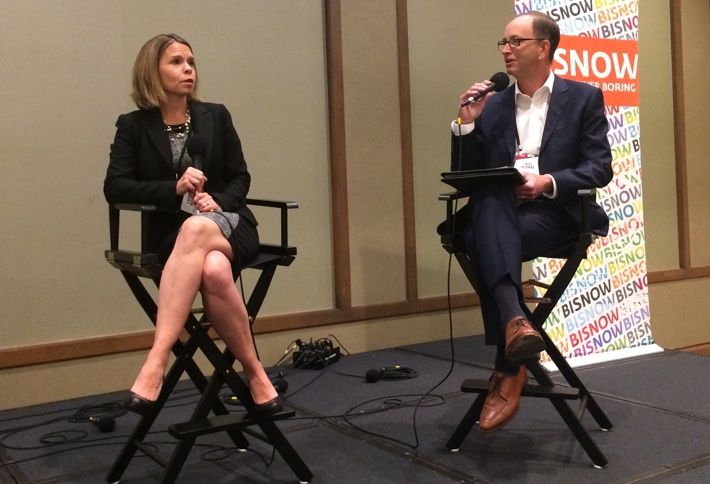 The panelists also commented on the status of the multifamily cycle.

“I think we’re probably in the seventh inning, but could go into extra innings due to the election and if we get any kind of fiscal stimulus," Joe said. "But we’re certainly long into the cycle, and we’re starting to hit an interest rate inflection point now."

Joe said people are waiting to see what will happen next. “Generally, when there’s a little bit of shock in the system, it breeds inaction. People need to sit and assess what’s happening, before they make a move again. Then deals will get done."

Laurie said from a lender standpoint there is concern about the number of units being built Downtown, but from a long-term perspective it will be absorbed. The question is how quickly it will be absorbed and what the market will be like when it comes online, she said. “If it were all delivered today, that’s one thing, but if it’s delivered in the next 18 to 24 months, and if the market turns, if it softens, then we have an issue in absorbing that." 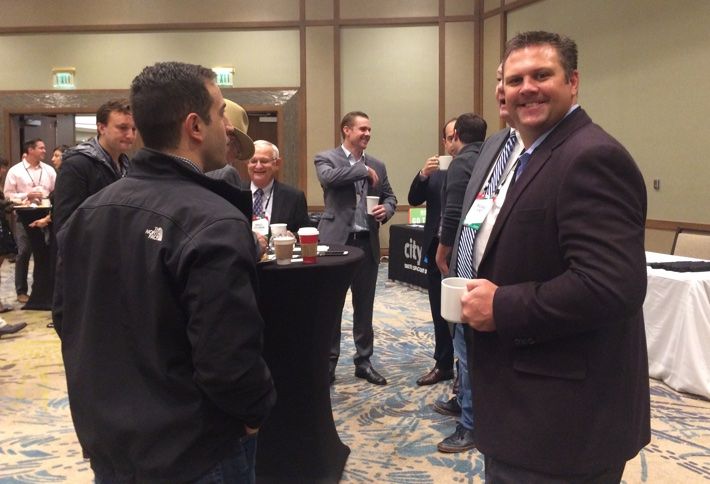 Greg said his company doesn’t compete with the type of projects being built in Downtown, but said, “If you’re at $3.50/SF in the urban core and a bank takes that project or someone else manages it and rents have to drop to $2.50/SF, we’re playing in a buck eighty to $2/SF [in the suburbs], so it’s going to start to affect all of us at some point—it will trickle, even if we’re in Carlsbad."

Bill asked Greg and Joe about rent premiums on their value-added work. Joe said every deal is different, but if you invest $10k in units, you’ll want a 20% return on that investment. Greg said his company doesn’t over-improve Class-B assets, putting in $6k on the low end to $9k to $10k on the high end. In San Diego, it translates to $125 to $200 rent premiums, he said.

“What we do is when we go into a community, we look at the incomes in place, related to the current rent roll, and try to engineer rent premiums that the existing resident base can still afford, so they don’t have to move due to income.”

“I think rents will continue to trend up here, but maybe more closely tied to inflation, with rents increasing 3% to 4% year-over-year for the next few years," Greg said. He said homeownership dropped from 63% prior to the recession to about 52% today, so that displacement created a lot of demand for rentals. Occupancy in his company’s Class-B properties is in the 90% to 95% range.

“I see rent deceleration happening,” Joe said. “The rate of increases is going down. We’re going to see that happen. It’s already happening in San Francisco, San Jose and it’s going to happen here too, but this is still San Diego, the population is increasing, we live in an area where there's not a lot of new supply coming up in suburban markets. And if you take a step back and look to what’s going to happen in the future, the rental market is still going to be strong.” 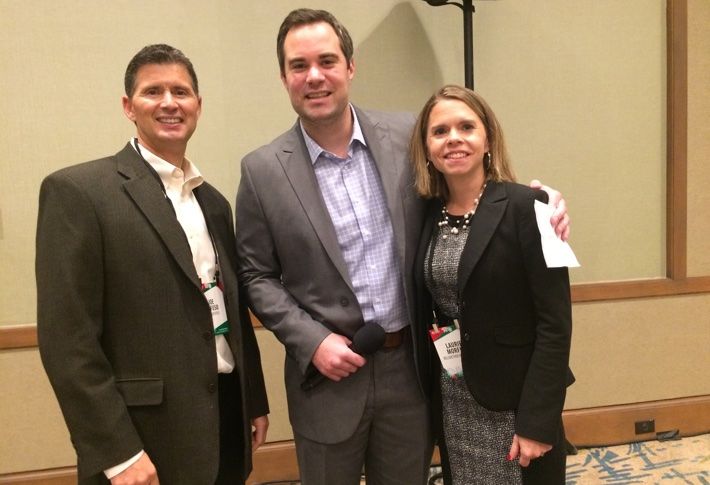 Laurie said debt for multifamily is still “very much available, thankfully with just a 60 basis point increase in Treasuries since Nov. 8.” For some deals in the works, she said buyers will have to go back to sellers to lower the price because the deal no longer pencils at the higher rate.

Laurie said compared to the same time last year, rates are maybe 20 to 25 basis points higher. “We keep waiting for spreads to come in to offset the increase in the Treasuries—Freddie Mac lowered its spreads by 5 basis points, but no lowering of spreads by anyone else," she said. Bonds are widening spreads, so that affects it. "If you look at it, it's 5% on a 10-year deal, which for commercial real estate is still an amazing rate. If you can’t make your deal pencil on that, then maybe you need to reconsider what you’re looking at."

Since the event, the Fed raised interest rates a quarter of a point yesterday, signaling a faster pace of increases. At least three rate hikes could take place in 2017, rather than the two previously predicted.

Over the last few years, investors have been buying with positive leverage—"the expected rate of return has been higher than debt," Joe said.

“[Higher interest rates] will be a whole new dynamic in what pricing does and what you buy, and that’s going to be a big change in regard to underwriting going forward," Joe said. That likely means a disruption period with a big spread between buyer and seller and adjustments will have to be made, he said. 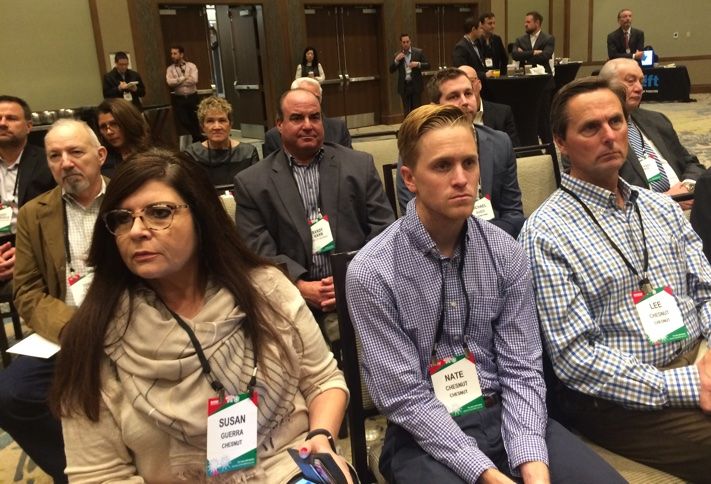 Greg said the higher rates are already impacting pricing by anywhere from 4% to 8%. “Groups who had planned to sell in the first quarter are asking brokers for valuation updates and don’t like what they’re seeing, so it makes you wonder how many properties will actually come to market,” he said.

Bill asked panelists if there is anything that could cause the market to turn. “Trump,” Laurie said. “There is so much uncertainty about the policies he will try to implement, and what will actually be implemented." She mentioned uncertainty about what tax reform will look like and how it will impact the commercial real estate industry.

Joe said what scares him is a shift from a declining interest rate environment, which has continued for the past 35 years. “We just saw a 60 basis point rise in rates in the blink of an eye. What would happen if there’s a 200 basis point rise? None of us has ever worked in that environment.

“We all think we’re smart, we’ve got long-term debt to protect us, and we’ve done something right. But to me that says that we're ripe for a black swan event, where we can’t predict what’s going to happen next,” he said.

"What concerns me is affordability,” Greg said. “In many California markets we’ve raised the cusp of affordability for renters.” He said rents accelerated fast coming out of the recession, exceeding wage growth. “People are now putting a greater percentage of their income into rent than previously...So any small correction could have a big impact on multifamily rents because we’ve pushed them to the brink."