Portland’s recovery is powerful, and people want to be here—but veteran developer Clyde Holland warns that if the city doesn’t have a competitive tax structure, it’s going to fall behind West Coast cities. (And if we've learned anything from Portlandia, it's that we won't accept defeat to Seattle.) 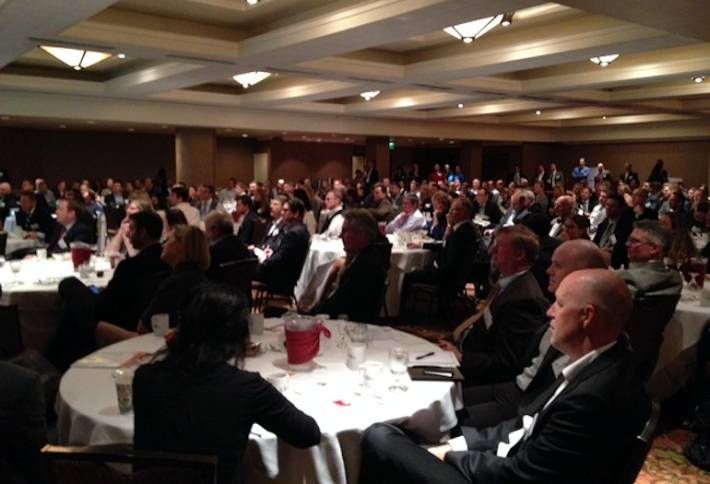 Portland is one of the top destinations for Millennials looking for work, the Holland Partner Group CEO told the crowd of 275 during Bisnow's inaugural Portland State of the Market event last week at the Benson Hotel. And top jobs will drive them here. But Portland made a decision in the early 2000s to increase the Downtown business tax, and since it was implemented, there has been no net growth. Now we’re falling behind places like Seattle, San Francisco, Silicon Valley, Santa Monica and Santa Barbara, Clyde says. He challenged the real estate community to make a point to our politicians that we have to be more tax competitive to bring in business. 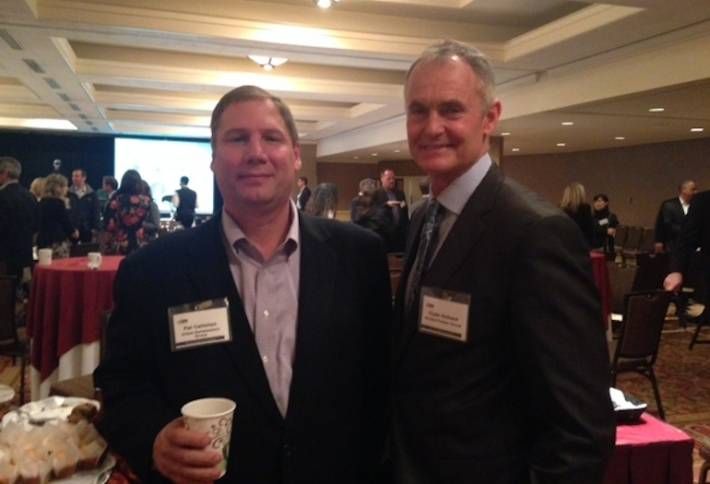 Clyde (right, snapped with Urban Renaissance Group CEO Pat Callahan, another speaker) says he first starting sniffing around Portland in 1992 after the S&L crisis; the city's recovery then was nine months ahead of Seattle’s. He fell in love and even moved his family just north of here. He says one of the biggest things Portland is known for is its fantastic planning: Three decades ago, for instance, it invested in a strategic growth initiative with property tax breaks for businesses; Intel moved in, and now it has five campuses. In the ‘80s, Portland offered no property taxes for 10 years if investors purchased buildings in the Pearl District and renovated them. “It cleaned up downtown Portland,” he says. 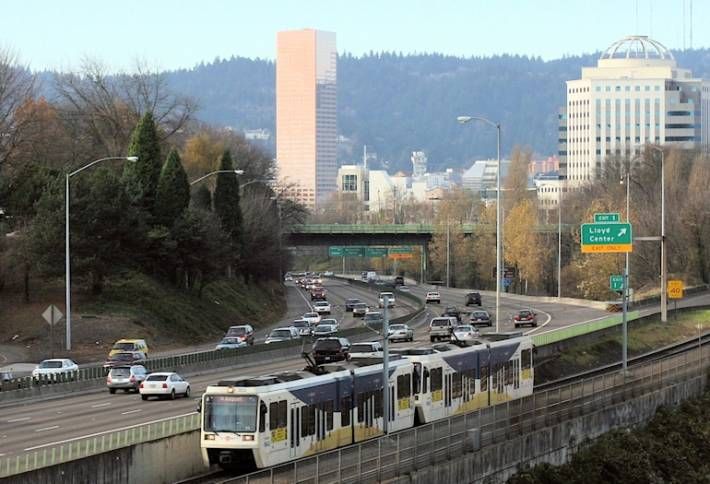 We also must have the political will to deal with pensions, Clyde says; TriMet's is coming up on 20 years and soon, its first driver can retire. He doesn't know if businesses are ready for another round of tax increases to support transportation, he says, pointing out how TriMet wants light rail to Vancouver so it can pay for the pension funds, something most Vancouverites are against because their side doesn't have the concentrated population needed to make it viable. He’s also concerned about housing; in '05, starts (both single and multifamily) peaked at 2 million units; in '09, that fell to 500,000. Multifamily starts are decreasing due to lack of entitled sites and costs; single-family is ramping up with greater availability of home mortgages, creating a tight labor and materials market. 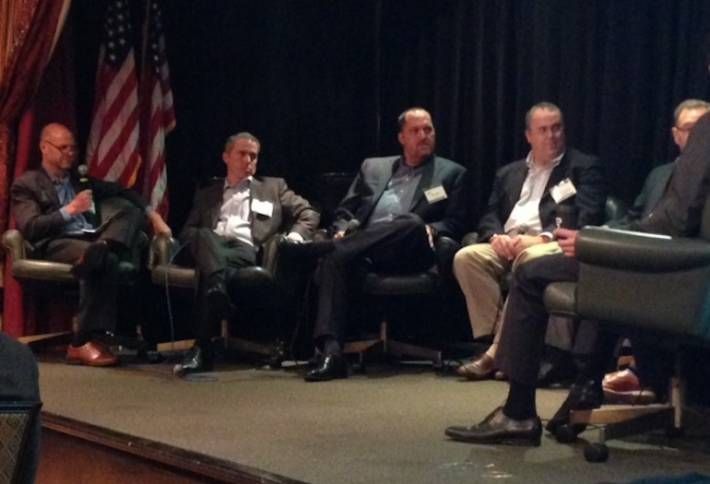 Above, Ball Janik partner Brad Miller leads our State of the Market panelists: Unico Properties VP Brian Pearce, JLL managing director Buzz Ellis, and Scanlan Kemper Bard Cos president Todd Gooding. Deal velocity is higher than three years ago; for office, as much as fourfold. Todd said he bought a property in Beaverton (a deal Buzz was also involved with), and it took six months to get done in 2012—there’s no way sellers would be that patient today. Panelists say there are two main leasing drivers: in-migration from firms with other locations on the West Coast and more indigenous growth than in the past. Buzz says some East Coast companies are also opening outposts here—five to 10 years ago, they wouldn't have chosen Portland. Venture capitalists are also investing here. 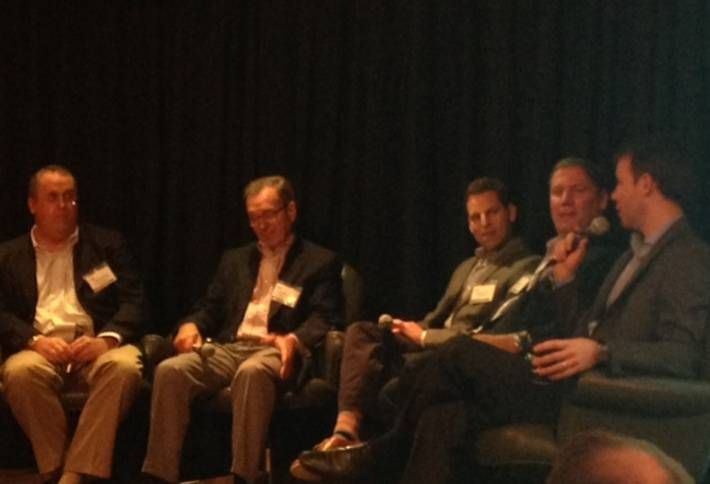 Todd and the rest of our panelists: Ankrom Moisan Architects president Tom Moisan, Zidell Yards director Dennis Allen, Pat Callahan and Killian Pacific VP Noel Johnson. Who's driving absorption? Tech and creative firms, panelists say. Buildings that are doing well are the ones putting in capital to deliver office space these firms want, even though it's more expensive than offering space as-is and moving a couple of walls. 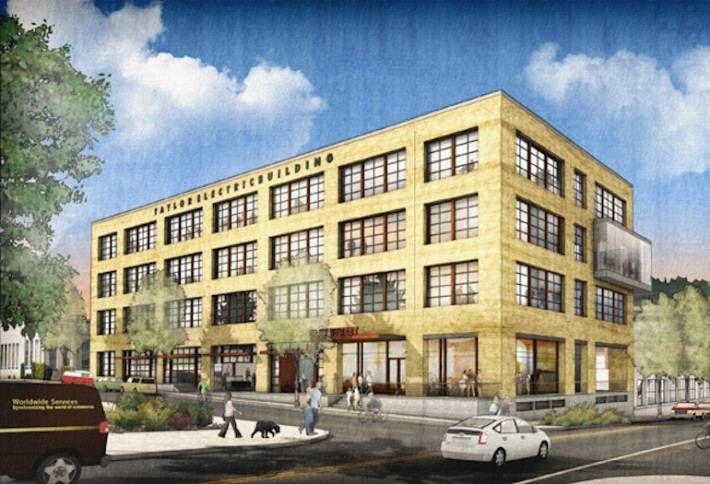 At Central Eastside, Killian Pacific owns seven blocks; four now are creative office and a merge of industrial and office space, Noel says; it'll start 240 Clay (above) in January. When Urban Renaissance Group purchased the historical, Class-A Yeon Building in 2011, quoted rates were $16/SF; it redid some of the floors; now rates are as high as $29/SF, Pat says. Although many creative companies are going for historical buildings, Brian says '80s vintage assets (like Unico's Big Pink) have large floorplates that'll make them competitive.