Co-working remains a tiny part of Philadelphia’s office market by footprint, but its influence has been enormous in terms of design and development. 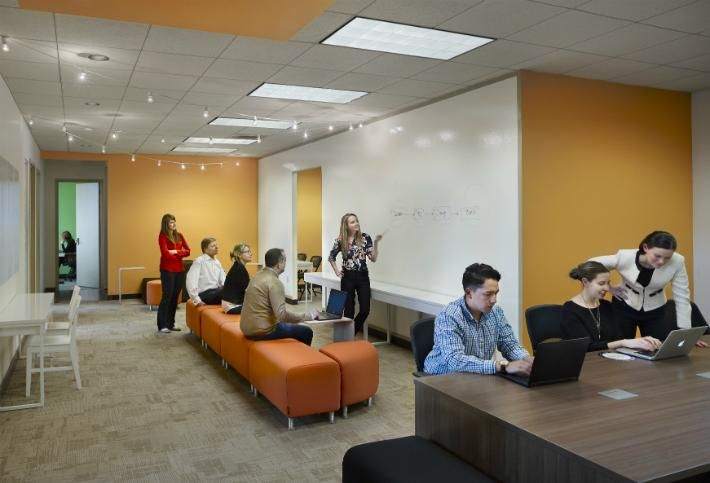 The mainstream acceptance of co-working has led it to grow beyond its image of a casual space for solo entrepreneurs and startups. Philly-based Benjamin’s Desk, which recently merged with D.C.-based 1776 and will rebrand under the latter’s name later this year, has seen a rise in established companies using its services to place individuals or small teams.

“Some of it is pure geography and a talent retention tool,” Benjamin’s Desk co-CEO Jennifer Maher said. “So if you’re a suburban company but you have a talent who doesn’t want to commute, you can just pick up a couple of desks or a small office from a shared provider. Or if you’re in a different city, rather than going into the process of building out an office, you can just grab a desk and get started that day.”

Online retailer Gilt Groupe, based in New York, placed an employee in a Benjamin’s Desk location, and Denver-based The Facade Group has grown from one to seven employees in Philadelphia. One of the biggest adopters of this strategy is Comcast, which might surprise some since it is the biggest office occupier in the city.

Comcast has been placing employees in Benjamin’s Desk locations, according to Maher, in order to benefit from the free-flowing idea environment. From there, Comcast has found talent to recruit, ideas to license and startups to acquire.

That environment is something that all office landlords have been chasing recently, whether by leasing space to co-working operators or opening up their design for tenants who increasingly demand shared spaces with fewer individual private offices and more variety between open desks, small group offices, conference rooms and small rooms for phone calls. Often, it will be because those tenants are transitioning out of co-working.

“It has changed the way space is planned, and I think it’s a good thing for some buildings to have a co-working component,” Shorenstein Realty Services Senior Vice President Chris Caltabiano said. “We’ve had buildings with some co-working spaces where companies have outgrown their co-working space into [traditional leases in] the same buildings.” 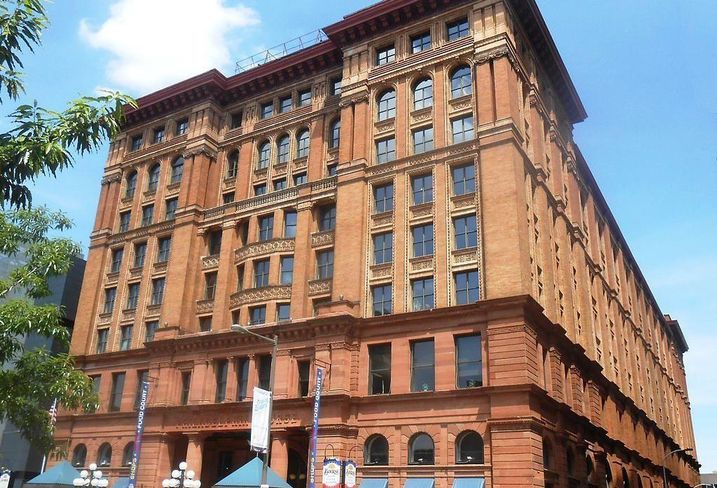 The buildings in which co-working operators have had success are not necessarily in the priciest submarkets or the newest construction, which has influenced how tenants view the real estate equation. While there is prestige in having the biggest, shiniest tower like the Comcast skyscrapers or the FMC Tower, some occupants would just as soon skip the trophy class.

“I would argue that an appropriate, well-done historic renovation is far superior aesthetically to any new construction perspective,” MRP Realty Managing Director Charles McGrath said. “And that’s a generational shift in thinking.”

MRP is renovating the historic Bourse building by Independence Hall, in part to foreground the unique atrium with its design and the new food hall. The goal is to highlight how old the building is, not how new.

“I don’t care who or where you are — maybe Shanghai or Paris — there are very few places you can afford to build the way they did 100 years ago,” McGrath said. “If you can curate an environment that is organic and man-made, you can create authentic appeal. No one wants to live in Disney World unless you’re a 5-year-old.”

Office spaces themselves will be more open, and amenities will be shared by the tenants, as has become commonplace. A massive fitness center with spin rooms, yoga rooms and a golf simulator, along with ping pong and arcade games like Pac-Man, embodies the generational shift McGrath observed.

Shorenstein is also renovating 1700 Market St., the sort of 1970s-era building that sits in the middle ground between appealingly old and excitingly new. But by redoing the lobby to add more airflow and natural light and redesigning the offices to fit the co-working-inspired trends, it has seen considerable success in leasing at a price point just below the trophy class. 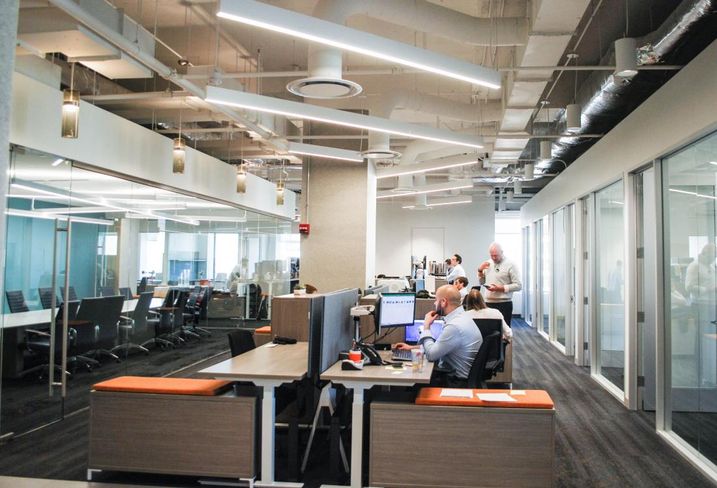 The amenities will be shared between all tenants, including the 6K SF fitness center and a 7K SF room for conferences, events and large meetings. Shared programming for that space will be operated much like the roof of a co-working location, but with breakout rooms for phone calls, lounge areas in the corners and some perches for people to quickly open a laptop and get right to it.

“It’s just going to force landlords to up their games, re-amenitize their buildings and increase flexibility in leasing space,” Fitler Club CEO David Gutstadt said of co-working’s influence. “Everyone has realized that to be competitive in office, whether you’re a 2M SF tower or a boutique space in an edgy district, people want space that they can either customize or that reflects what their brand or company is.

"Landlords who don’t adapt are going to be left with a subpar pool of tenants to choose from.”

While co-working’s increase in popularity has led workspaces to be more social, it has also made social spaces more work-oriented. Maher said that Benjamin’s Desk has taken to increasing productivity and A/V capabilities in what were once purely lounge areas in its locations, and a new hybrid of social and work space is coming to 2400 Market St. below Aramark’s new headquarters.

When it opens, Fitler Club will be the second private social club in downtown Philadelphia, joining the venerable Union League. But while the Union League screams old money with its aesthetics, Gutstadt said, Fitler Club will present a more modern option for that sort of top-of-the-market luxury. Part of that modernity will include two co-working spaces. 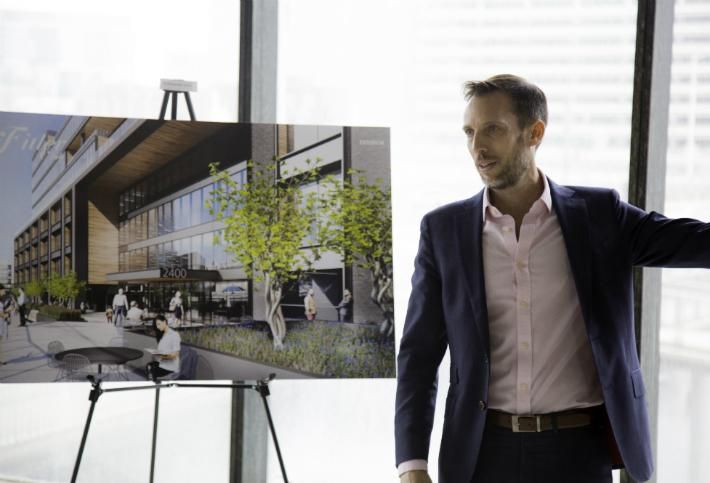 On the club’s first floor, a co-working space with 60 to 70 open desks, 12 offices and two conference rooms will be just off the lobby. More private offices, conference rooms, a business center and a communal desk with six to eight seats will be right next to one of the club’s two restaurants on the second floor. Fitler Club members will be able to access such co-working spaces both à la carte and with monthly fees.

The social, wellness and dining aspects of the club will be its focus and primary driver of business, but giving desks, offices and conference spaces for members to use, either regularly or at the drop of a hat, is Fitler Club’s way of capitalizing on the demand for live-work-play environments. The line between the three is increasingly blurry.

The way that Life Time has added co-working to its wellness brand and plans to add residential on top of that may give some pause about trying to do too much. One could argue that the end point of such a drive is to create some sort of all-phases singularity encouraging people to do everything in one space and never leave (like the aforementioned Disney World), but Gutstadt dismissed that concern while reasserting his desire for convenience.

“There will always be a need to bring people together, and though we do want to bring people in, there’s no goal to keep them there and have them never see the outside world,” Gutstadt said. “There’s no magic to having a gym and co-working and dining in separate places and hustling between them. We’re just trying to make it easier.” 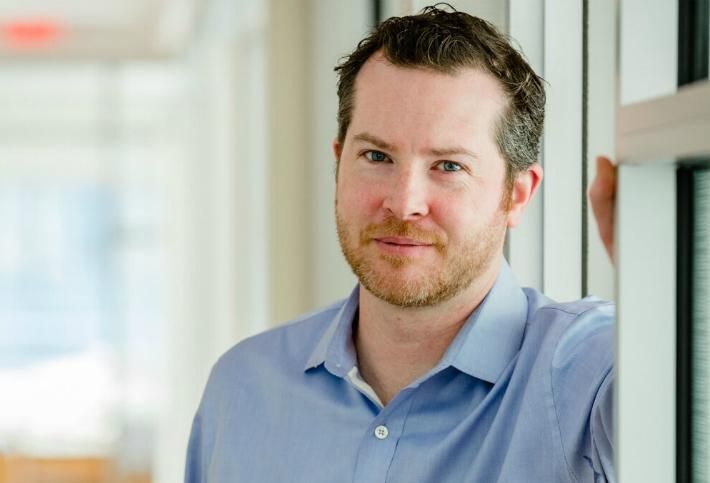 Co-working providers pushing convenience has caused office tenants to demand the same from landlords, and though tenant improvement allowances are more prevalent than ever, landlords are unable to meet every request.

“We’ve had office tenants ask to have pet spas and day care in the building,” McGrath said. “Not to say I don’t like pets, but at a certain point, come on.”

Pets in general have been gaining ground recently as a desired inclusion from office tenants, which may be a result of providers like WeWork and MakeOffices having dog-friendly policies.

“It absolutely is a trend, the same way as it is with residential,” McGrath said. “People are looking at office buildings not as a place they just leave, but as a part of their daily habit. As live-work-play becomes more important, it’s not surprising to see pets written into office leases.”

From wood-lined offices with pebbled glass doors to social spaces, open design and even dogs, traditional office is transforming to meet a new generation of tenants — a generation, to some extent, that grew up with co-working. As a result, co-working has grown up alongside it.

“Co-working has absolutely grown up, and that’s why we’ve been getting rid of the stigma that was in place for co-working a few years ago,” Maher said.

Come hear more about this and other office trends at Bisnow's Philly Workplace of the Future event at the Bourse on Jan. 24.