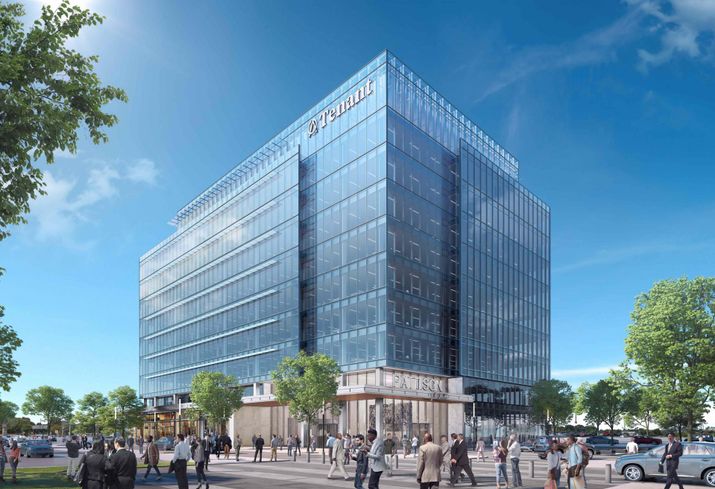 Courtesy: Beyer blinder Belle/BLT Architects
A rendering of Pattison Place, an office building proposed by Comcast Spectacor and Cordish Cos.

Comcast Spectacor, a sports and entertainment subsidiary of Comcast, has announced plans to construct a 200K SF office tower beside its Xfinity Live! multi-bar complex, the Philadelphia Inquirer reports. The plot of land is currently a parking lot between the Wells Fargo Center, Lincoln Financial Field and Citizens Bank Park, which among them house all of Philadelphia's major professional sports teams.

The office building, slated to cost $80M and be dubbed Pattison Place, will be a joint venture with The Cordish Cos., and include an estimated 20K SF of ground-floor retail of its own. Comcast Spectacor and Cordish also co-own Xfinity Live!.

Comcast Spectacor controls the sizable plot of land on which all three stadiums sit, as well as the Wells Fargo Center and the Philadelphia Flyers. Cordish is also building a casino and hotel, once part of its Live! brand but since renamed, at the north end of the 47-acre plot.

Spectacor already occupies office space in the Wells Fargo Center, which is about to undergo $250M worth of renovations, and currently does not have any plan to occupy Pattison Place. It will not break ground on the glassy structure until a suitable amount of pre-leasing has been achieved. Spectacor did not rule out filling the building with other Comcast subsidiaries, according to the Inquirer.

While the three stadiums and Xfinity Live! now are islands dotting an ocean of parking lots, the casino and office plans indicate that Spectacor may have mixed-use dreams for the land that surrounds the southern end of the Broad Street Line. The company released a video to press and prospective tenants advertising proximity to the nearby Philadelphia International Airport and the Philadelphia Navy Yard, the latter of which runs a shuttle service to the BSL station.