Tax Incentives Are Only The Beginning Of Camden's Revival Story

Two massive developments have garnered a large share of the conversation surrounding a Camden revival, but the city’s improvement can — and must — be about more than two projects. 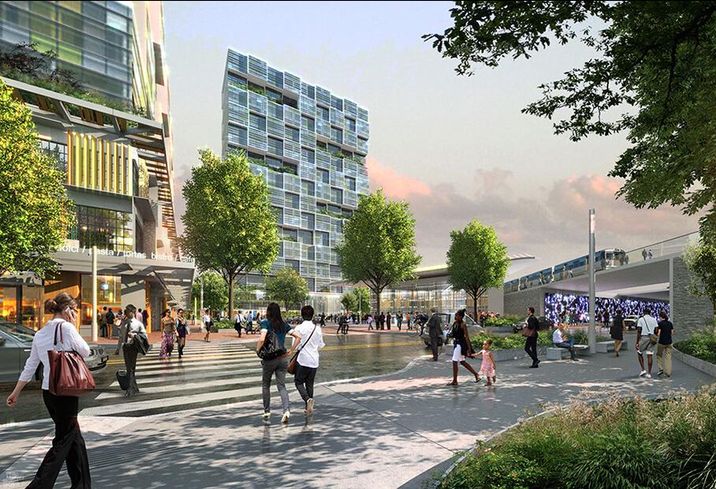 “Certainly the tax benefits are driving most relocation to Camden at this time,” Brandywine Realty Trust Vice President of Development Brian Berson said. “It is important to understand, and publicize, that we have never seen an incentive program as generous as Grow NJ in our lifetime.”

Grow NJ allowed Subaru to move from Cherry Hill and American Water Works to consolidate several regional headquarters to one facility, and it also encouraged three financial firms to build a joint headquarters — to be called Camden Tower — on the waterfront. Energy company Holtec International opened a $320M headquarters in September thanks to about $260M in tax incentives, a number that gives a sense of how hard the State of New Jersey is pushing Camden as a business destination.

With about 500K SF of remaining buildable office space on the waterfront and 1.5M to 2M SF in Knights Crossing, plus up to 75K SF available at the Ruby Match Factory conversion, more businesses could definitely be on the way. But no matter how much growth Camden enjoys, it will always be Philadelphia’s smaller, neighboring city. Rather than bristle at a little brother relationship, Camden is using lessons from Philadelphia’s own growth in the past couple of decades, like investing in education and healthcare, or "eds and meds."

“One in every three jobs in Camden is from the 'eds and meds' space, and that number is only going to increase substantially over the next decade,” Rowan University/Rutgers - Camden board of governors CEO Kris Kolluri said. “So that is the investment that we’re making between [Rutgers and Rowan], and that’s what’s going to ground the downtown core of Camden.” 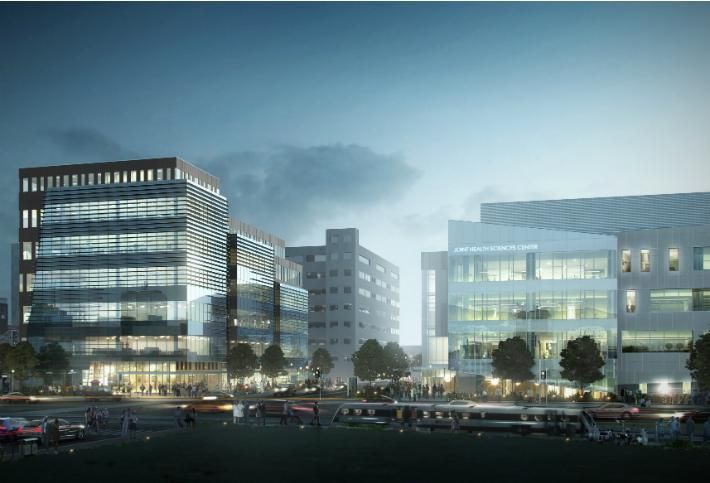 As much as business recruitment and tax incentives are advertised to outsiders, investing in education is a path to more sustainable growth for the city as a whole and its residents. Rutgers recently opened a $62.5M Nursing and Science Building, and will soon be breaking ground on a $70M Joint Health Sciences Facility that will be shared by Rowan and Camden County College in a first for the three schools. Since Rutgers, Rowan and Camden County College are all public universities, these improvements are relatively affordable and accessible to the local population.

Across from the joint health sciences building, Rutgers and Rowan are demolishing a retail structure, and in its place hope to use a public-private partnership to build a life science-oriented development. The Joint Board of Governors plans to put out a request for proposals in 2018 to find a developer, after which a more specific idea of the building’s use will take shape. For now, the only firm plan is that the ground floor will have health-oriented retail.

Brandywine and Liberty are also contributing to the local population with pledges to hire Camden-based businesses and laborers for their projects. Brandywine has spent $3M on Camden businesses, according to Berson, and Liberty has promised to ensure that 10% to 20% of its construction labor force lives in Camden.

“We have funded a training class that would allow folks without skills in the construction trade to take a class that teaches them how a construction project like this works,” Liberty Property Trust Vice President of Leasing and Development Anne Cummins said. “When they’re done with the class, the union would allow them to be pre-apprentices and we can tap into them through subcontractors to put them on our project if we’re not hitting our targets.”

Connecting businesses to the city is especially important considering that nearly all of the new arrivals are regional relocations, which runs the risk of creating a commuter culture that empties out when the offices close. To that end, a $2B investment in the city’s light rail system, plus improvements to City Hall Station and a $150M renovation of the Walter Rand Transportation Center, is on the way, according to Kolluri. 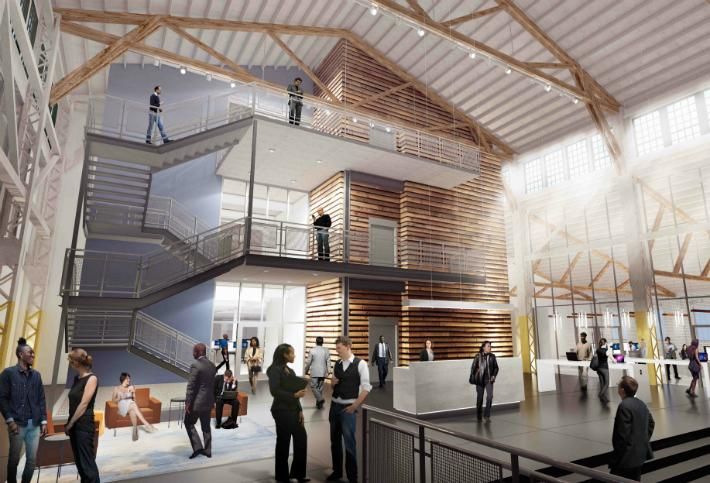 Courtesy: AthenianRazak
A rendering of the atrium at AthenianRazak's office renovation of Camden's Ruby Match Factory

“I think [public transit] will be as important or more important as it is in Philly and the other regional sites, but at the moment a lot of users in Camden drive, because many of them are accustomed to office park settings in South Jersey,” AthenianRazak CEO Jackie Buhn said.

Public transit, like education, is also a way to ensure increased prosperity can benefit city residents across all demographics. With the amount of public improvements Liberty is pouring into the waterfront, as well as newer retail coming both there and across the street from the multi-university science center, access can both improve residents’ quality of life and ensure a wider consumer base for the businesses there.

“If you are able to connect the multimodal network that exists to all parts of the city and region, it will be followed by a healthier community, a more vibrant community and a more employable community,” Kolluri said.

Another key step in fulfilling Camden’s promise is improving its public image, not just to businesses but to potential residents. Camden still carries a reputation for crime, but an employment bump for Camden County police has helped the homicide rate slow by 31% this year. Integrating the new developments in the community, rather than making them islands of prosperity, could also help curb crime.

The waterfront's multifamily portion, developed by the Michaels Organization, will have 20% of its units designated as affordable. For the only residential component of any of the major new developments, that is a crucial element.

“What Camden really wants and needs is mixed-income neighborhoods, and I think what [the waterfront] does is inject a billion-dollar private investment into a portion of the city that can hopefully start to build some momentum so that the growth can radiate from there,” Cummins said.