Officials from Community College of Philadelphia and Radnor Property Group, along with City Council President Darrell Clarke, held a ceremonial groundbreaking Tuesday, eschewing shovels to swing sledgehammers at a pile of bricks to kick off the redevelopment of what will become The Hamilton. 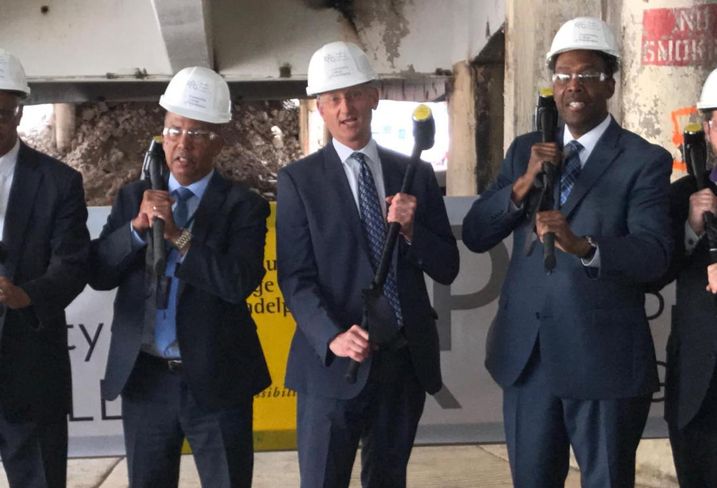 From the bones of a longtime industrial building, most recently a paper transfer facility for the Philadelphia Inquirer, will rise a $150M mixed-use development with market-rate housing sitting above ground-floor retail. Although no special considerations will be made for CCP students who wish to live in the Hamilton, CCP President David Generals called the building "comparable to what students get in other schools in Philadelphia."

"We have committed to providing students with modern accommodations," Generals said.

Though market-rate housing is not the first choice of many college students, much less those who attend community college, Radnor founder David Yeager stressed that the Hamilton will be "smart Class-A" housing, with rents 10% cheaper than other new developments in the area and the option for apartments to come fully furnished.

"It's a mature student population," Yeager said in an interview at the event, noting that the average age of a CCP student is 26. "Many work on a full-time basis."

The Hamilton will achieve its lower rents due to the money saved on redeveloping its industrial predecessor, which has underground facilities that Radnor will convert into a parking garage. The money saved from what would otherwise be an expensive excavation project will be passed on to tenants, Yeager said. 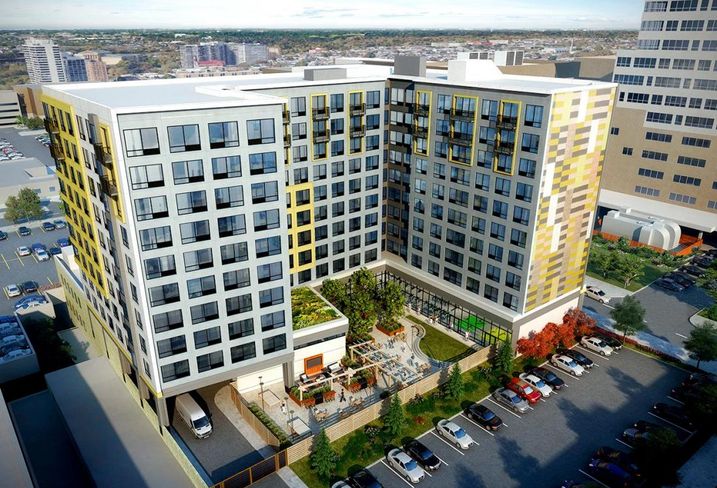 Courtesy: MY Architecture
A rendering of the first phase of The Hamilton

The first phase of the Hamilton, an $82M residential tower with 1,600 SF of retail space, is projected to be completed by August. Michael Ytterberg's MY Architecture designed the 279-unit building and its amenity space, which will include a fitness room, a gaming room, a library, a courtyard and a coffee bar, according to Curbed.

The retail portion is likely to be a restaurant, or "foodie place," as Yeager put it. The larger second building will house 321 units and additional ground-floor retail. Radnor will develop the buildings and be co-owner with CCP. Yeager named Nationwide Insurance as a capital partner and Santander Bank as the lead lender on the project.

On 15th Street close to Spring Garden, the Hamilton is just over a block away from the North Broad Street corridor that is seeing as much development activity as anywhere in the city. At the corner of Spring Garden and North Broad, Parkway Corp. is planning a $300M mixed-use development, and the Philadelphia Police are moving into the former Inquirer headquarters a block south.

"We're proud to be part of the renaissance of this area," Generals said. 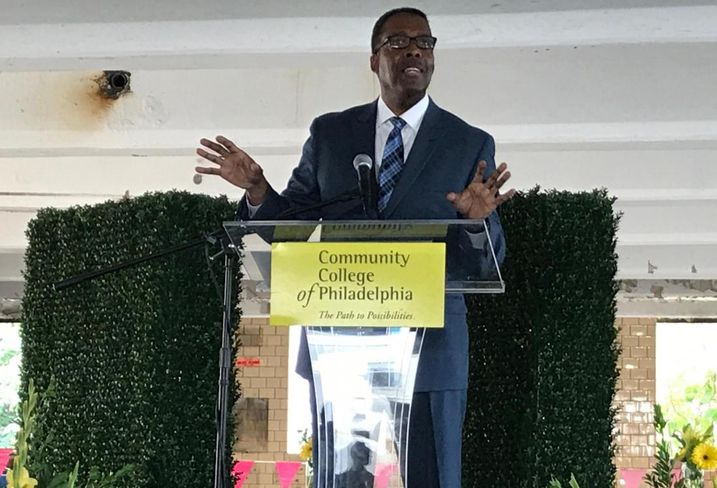 Clarke, whose district includes the Hamilton and CCP's nearby location, said community colleges were thrust into the political spotlight during the presidential election, when multiple candidates promised to make attendance free, including Donald Trump, which Clarke pointed out to laughter from the audience.

"Community college is no longer an afterthought in higher education," Clarke said.

He also praised CCP for "understanding the need to diversify and remain competitive." CCP's higher education big sisters Drexel University and the University of Pennsylvania have made their own big investments in private development.

A group of about a dozen CCP faculty and staff protested the event, carrying signs bemoaning CCP's use of funds on things other than employee salaries. The protesters gave scattered chants as photos were taken of the ceremonial sledgehammer swing.

"We're concerned with the priorities of CCP's leadership," CCP teacher and American Federation of Teachers Local 2026 President Steve Jones said in an interview. "We've been without a union contract for 12 months, and we're getting frustrated with the lack of progress in negotiations." 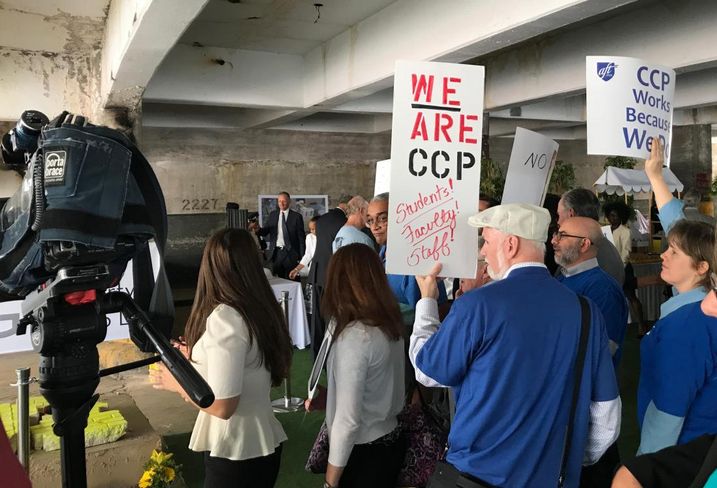 Despite the project's promises to be affordable for market-rate housing, Jones is among those questioning if the Hamilton will be affordable enough for most CCP students, many of whom would qualify for housing designated as affordable.

"Because it's market-rate, we question whether [the Hamilton] relates to CCP's mission," Jones said. "Our current students won't be able to afford this."

According to Jones, 60% of CCP's operating costs are covered by student tuition, which is among the highest in the country for community colleges. Part of that is due to shrinking investments from the city and state. Jones warned that CCP is becoming "de facto privatized."

With dwindling funding from CCP's traditional backers, some see a profitable investment in real estate as a crucial alternative source of revenue, as with Penn and Drexel. Unlike CCP, those schools are private institutions.

"There could be a potent benefit in the form of income, but we still question the priorities involved," Jones said. "The No. 1 investment should be in human beings — staff and students."

CORRECTION, SEPT. 13 1:30 P.M. ET: The total cost of The Hamilton is projected to be $150M. A previous version of this story misstated the number. This story has been updated.