Millennials Are Key To Driving The Future Of Orange County's Economy

Experts say the next recession is not a matter of if, but when.

Eight years since the last recession and with no end of a healthy economy in sight, those in the industry continue to be cautiously optimistic and bullish in the local Orange County and national economy in the short term.

There is one caveat — millennials will be the key to keeping the economy going and growing, commercial real estate experts said at Bisnow’s Orange County State of the Market event Jan. 23 at the Hive in Costa Mesa.

“I think the traditional definition of a recession is antiquated — two years of negative [gross domestic product] growth and high unemployment rates,” Steadfast Cos. President Ella Shaw Neyland said, adding that there have been smaller unnoticeable recessions in different sectors of the commercial real estate landscape.

“I think there’s a new norm as far as what growth will be because I think consumer spending will be less,” she said. “The millennials don’t tend to have a high income so they don’t tend to buy as much stuff. I think we’re entering a period of new normalcy but not the kind of growth we are expecting.”

As baby boomers enter the twilight of their lives, Gen X and, mostly, millennials are expected to continue to drive up the economy.

While the baby boomer generation lived to work, millennials work to live, Neyland said. And that poses issues especially in housing, office and the retail sectors in Orange County.

Millennials are marrying and having children later. Most opt to live in apartments and tend to work in a contract or part-time job.

“The baby boomers built a lot of our wealth through homeownership,” Neyland said. “When you think about millennials not buying homes, that’s a challenge. And that they don’t have a traditional job with a 401(k), that’s a challenge too."

Meyers Research principal Mollie Carmichael said it is not that millennials do not want to own homes but lack of affordability is a big factor preventing them from doing so.

Orange County has to focus on housing that matches their price points, she said.

"We need to see innovative production solutions, and if we don't, I think we're doomed," Carmichael said.

She believes a recession will most likely hit Southern California sometime from 2020 to 2023.

But Orange County leaders have to do a better job marketing the area as a tech hub and hip place for the younger generation.

Orange County has had tech but mostly manufacturing, engineering and research and not companies like Twitter, Google, Facebook and Amazon, which are the champions of other dynamic markets, such as San Francisco, Seattle and Los Angeles, Monday Properties Senior Vice President Carl Groner said.

"We need more innovation here in Orange County," The Koll Co. principal Scott Lanni said. "We need tech to reinvest and grow, and I think that's a way to keep and grow the jobs and increase office demand in Orange County."

"Orange County is this sleepy little county that we haven't marketed to the rest of the world," Santry said. "We have a great life and lifestyle. I don't think we've done a good job to showcase that.

"We have to attract the millennials and keep them here," he said.

Check out photos from the event: 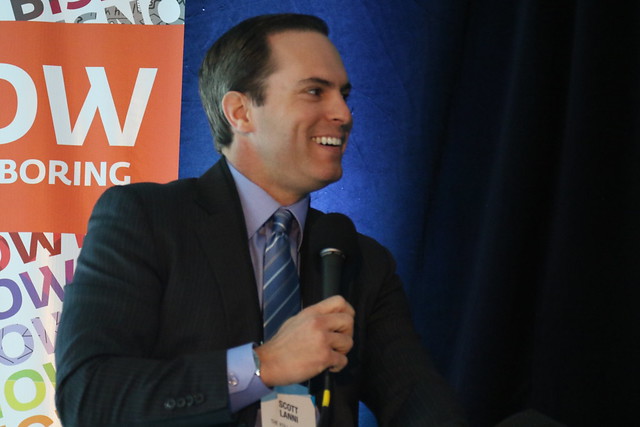