Bisnow caught up with TCR development associate Jason Ballow (pictured on vacation in Maui with wife Amy and their three sons, Carter, Evan and Colin) to learn more about this project and what attracted TCR to the Anaheim CtrCity area. “For us, it was a real lack of new supply in this part of Anaheim, coupled with the proximity to jobs in the area,” he tells us, “plus exciting new dining and entertainment choices and upscale retail amenities, like the nearby Packing House.”

Designed by Dallas-based Humphreys & Partners Architects, the project’s exterior pays homage to the historic colony’s character, with a contemporary adaptation of late 19th and early 20th century architecture, but units will feature sleek, modern finishes. It will feature studio, one- and two-bedroom apartment homes, ranging from 611 SF to 1,141 SF and one or two baths. Highlights will include nine-foot (or higher) ceilings, stainless appliances, contemporary flat-panel cabinetry, quartz countertops in kitchens and baths, contemporary color schemes, and washer and dryers.

With landscaping by Newport Beach-based MJS Landscape Architecture, the Alexan’s resort-style amenities include a landscaped pool and spa area, a clubhouse with an entertainment lounge, two courtyards with fireplaces and gas barbecues, secluded gathering spaces, a state-of-the-art fitness center, and high-speed WiFi in all common areas. The project has a 506-vehicle parking structure. Rents are anticipated to range from the mid-$1,800s to $2,700. Jason says the retail component will be curated with a mix of eclectic retailers that will appeal to residents and visitors alike.

Trammell Crow’s move is another significant piece of this neighborhood’s explosive, strategized growth, Anaheim community and economic development director John Woodhead (above) says, noting other investments in this district include significant residential developments and major commercial and office projects, along with retail experiences offered by the Center Street Promenade, with a variety of one-of-a-kind boutiques, pubs, restaurants, a Gehry-designed ice rink and the popular Packing House (the Grand Food Hall of the Packing House is pictured below).

“This is a hip place with a retro feel that echoes the past with new and reused buildings,” John tells us. He says the opportunity to bring Downtown Anaheim back to life was nearly lost in the 1980s due to the city’s misguided effort to rejuvenate the two-square-mile downtown area, which had succumbed to blight. Nearly 100 acres of historic buildings were destroyed. 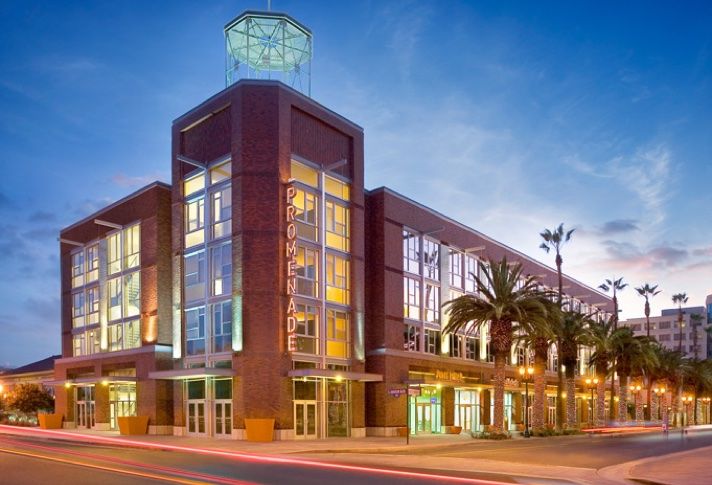 In 2004, the city’s redevelopment agency formed a public-private partnership with developer CIM Group to transform the Downtown core, with the city investing $26M and CIM $73.5M to develop 278 homes, 36k SF of retail and a parking structure, as well as Muzeo Museum and Cultural Center.

Pictured is Center Street Promenade development, which was developed by CIM Group the first mixed-use project in Downtown Anaheim, with 58 residential units and nearly 9,500 SF of ground-floor retail. The project is now owned by Greystar Real Estate Partners.

Currently, a trolley circulates between Center Street Promenade and the Packing House (above), while another trolley moves both tourists and residents to and from Downtown, the Entertainment District and the Platinum Triangle—the city’s newest redevelopment area—and ARTIC (Anaheim Regional Transportation Intermodal Center) near Angel Stadium. John notes the Metro and Pacific Surfliner rail systems carry commuters to downtown LA and San Diego within about 30 and 90 minutes, respectively.