A pair of big names have broken ground in the downtown of an East Bay city with high housing hopes. 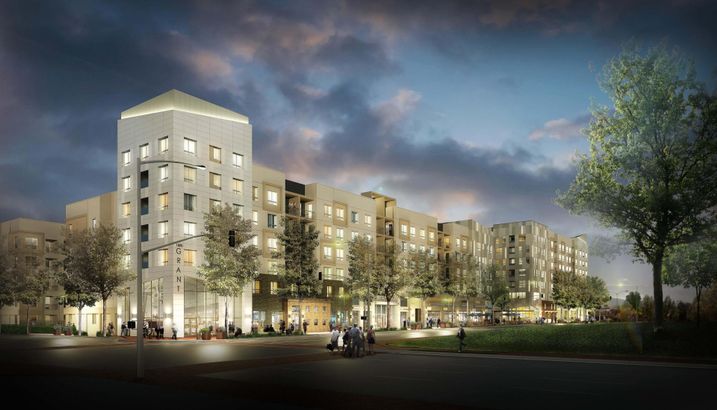 Courtesy of Hines
A rendering of The Grant, a 228-unit luxury apartment community being built by Hines and MetLife Investment Management in Concord, Calif.

Approved in 2018, the project has been planned since 2016, when developer Browman Development Co. submitted plans for a smaller project before Hines came aboard, the East Bay Times reported in 2018. Designs now call for two buildings split by Clayton Road and for studios through two-bedroom apartments between 506 and 1,211 SF.

The project represents one of several attempts at adding to housing inventory in Concord, whose population of about 130,000 makes it one of the Bay Area's larger cities. The biggest previous one has seriously stalled: Lennar's plan to develop thousands of units at the former Concord Naval Weapons Station, which is now off the table following a labor dispute.

"With its excellent amenities and irreplaceable location, The Grant will set a new standard for living in the East Bay," Clever said in a statement.

While some Bay Area submarkets saw rents plunge last month, average one-bedroom rents in Concord held relatively steady year-over-year, coming out to $1,740 in May, according to Zumper.

Matthew Lewis, director of communications for California YIMBY, a pro-housing organization, said every new housing project that breaks ground in the state is a victory.

"We will never begrudge a developer or builder who sees an opportunity to build market-rate housing and can get it done," he said.

The project extends down two blocks along Grant Street and is one block from Concord's downtown BART station. Architects Orange is the design and landscape architect, while Haven Design Studio leads interior design.

"This absolutely represents a win for the city of Concord," Concord Community and Economic Development Director Andrea Ouse told Bisnow. "We have, through our policy documents such as our housing element and general plan, anticipated and planned for higher density housing around the downtown Concord BART station."

Hines expects construction, which is being led by general contractor Brown Construction, to wrap up in Q3 2022, with leasing supposed to start that April.

One of the world's largest real estate companies, Hines has a number of investments and developments throughout the Bay Area, including a 61-story mixed-use tower in San Francisco's Transbay area.