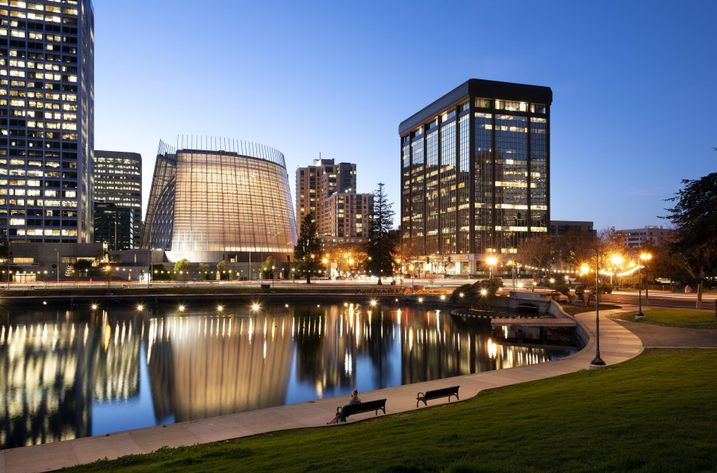 The latest buyer in the Oakland office market's record-breaking hot streak is AXA Investment Managers – Real Assets, which has joined Harvest Properties in the acquisition of 180 Grand Ave. for $175M, or about $627 per SF, according to a source familiar with the deal.

Right next to Oakland's Lake Merritt, the 279K SF Class-A building marks a new high point in Oakland's increasingly hot office market as the first to top $600 per SF, according to data from brokerage Cushman & Wakefield.

KKR and Harvest formed the previous ownership group, which purchased the 15-story building in 2017 from Ellis Partners for $119.25M, or almost double what Ellis Partners paid for it in 2014. Emeryville-based Harvest is staying on as a minority stakeholder going forward.

"Numerous demand drivers including thousands of new residential units and an exciting new social and amenity-rich infrastructure is helping to transform Downtown Oakland into an exciting live/work/play environment and an affordable alternative to San Francisco,” Harvest partner Kathryn Collins said in a statement. “As a result, Oakland’s leasing dynamics will continue to strengthen.”

The building is 97% leased, and the new ownership group plans on modernizing its elevator system, improving its common area and adding a creative workplace environment on the seventh floor.

“We look forward to working with Harvest to serve the property’s strong tenant roster and further enhance the building’s competitive position in the Oakland market," AXA IM Head of North America Steve McCarthy said in a statement.

Harvest is a commercial real estate investment and development firm that specializes in joint venture acquisitions in Northern California. The company recently sold its 196K SF office tower in Burlingame for $75.3M to Woodstock Development.

AXA IM – Real Assets is a subsidiary of the $60B French conglomerate AXA, a multinational insurance company.