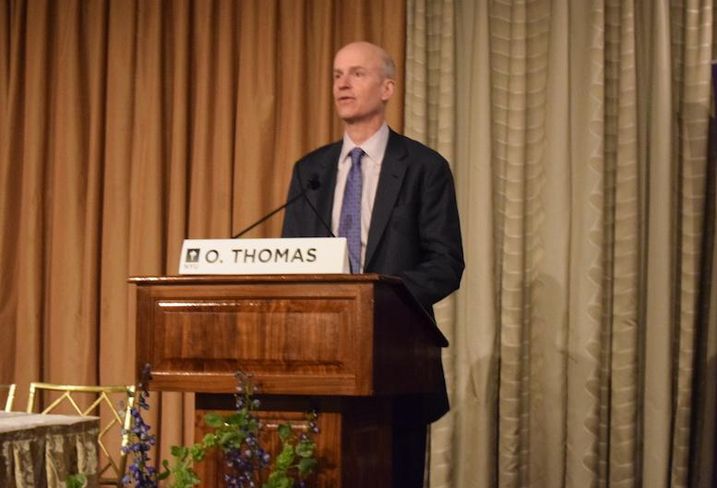 Boston Properties CEO Owen Thomas controls more valuable office real estate than almost anyone, and he expects a continuation of the steady growth in American gateway cities where his company is invested.

At the NYU Schack Institute of Real Estate's REIT symposium Thursday morning, Thomas said solid economic growth since the Great Recession does not have him concerned about rising interest rates, although national growth has consistently hovered under 2% per year.

"Low interest rates could be a certainty for a long time to come, we have not had growth that has impacted interest rates," Thomas said.

The economic recovery has the REIT focused on selling partial ownership stakes of buildings to capitalize on growing equity, rather than entire buildings. Currently, Boston Properties co-owns four trophy office buildings in Boston and New York with Norges Bank Investment Management on a 55%-45% basis totaling $5.5B.

Norges bought minority stakes in three buildings, at 601 Lexington Ave. in New York as well as 100 Federal St. and the Atlantic Wharf Office Building in Boston, for $1.5B in 2014. The partnership started in 2013, when Norges purchased a 45% stake in the Boston Properties' skyscraper at 7 Times Square for $684M.

"In this market, it is better to recapitalize an asset than sell," Thomas said.

He warned against short-term thinking in commercial real estate; treating office buildings like commodities is not a recipe for sustained success. He expects large landlords to continue to expect rising revenues from increasing rental prices.

"Rents in most places, except San Francisco, have not reached the highs of last real estate cycle," Thomas said.

The REIT is also focused on entering the Los Angeles market. In 2016, the company purchased Blackstone Group's 50% stake in a 1.2M SF, six-building office park in Santa Monica known as Colorado Center. Thomas said the company would be looking to expand in the market in the next five to 10 years.

"We are the only remaining office company in all the leading gateway cities in the country, and we see Los Angeles as an important gateway market," Thomas said. The company had previously been focused exclusively on the New York, Boston, San Francisco and Washington, DC, areas.

In another move to adapt to the changing office market, Thomas said Boston Properties is conscious of the changing office tenant. He sees tech and life science companies, with their unique needs, driving demand. Traditional downtown areas with only retail inventory will be forced to change as mixed-use property is in higher demand.

At the end of the fourth quarter of 2016, Boston Properties had embarked on seven new projects, including the development of a George Washington University site in Washington, DC, and following through on its winning bid for the Marriott Headquarters in Bethesda, Md., of which it owns 50%.

The REIT is working with a land partner to develop a 402-unit residential project in MacArthur Transit Village in Oakland, Calif. The project is set to commence in 2018 and finish in 2020. The developer also received approval to develop Akamai's 475K SF headquarters in Cambridge, Mass.