A week after announcing a market-changing new headquarters plan, the world's richest bank has signed a lease to move into another new Midtown Manhattan office building. 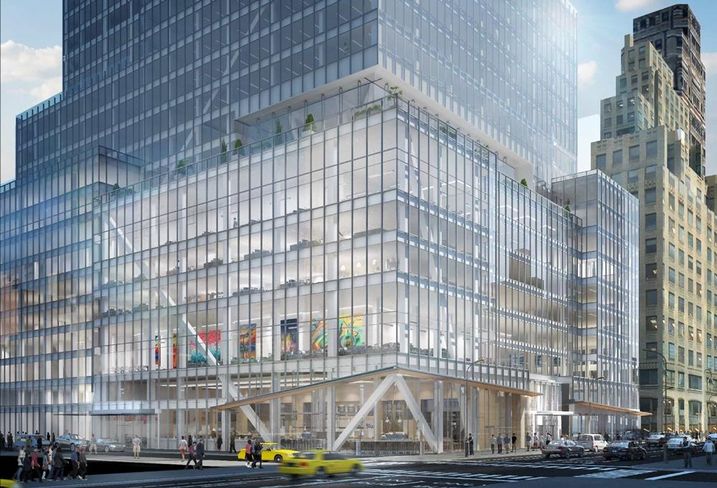 JPMorgan Chase signed a 437K SF lease at 390 Madison Ave., a tower that was significantly demolished, remassed and is being built like new by developer L&L Holding Co. The bank will occupy 16 office floors and two retail spaces, bringing the building to 100% leased months before it has evened opened.

JPMorgan joins Shiseido Americas, which signed for 225K SF in December, and law firm Hogan Lovells, the building's first tenant, signed for 200K SF. The building, when it opens this summer, is one of the few new construction projects in Midtown, which has helped it push back against the gravitational pull the Far West Side has had on the New York City office market.

The bank has planted its flag as firmly in Midtown as Google has in the Meatpacking District. Last week, it announced it plans to demolish its 1.5M SF headquarters at 270 Park Ave., just a few blocks from 390 Madison, and replace it with a 2.5M SF skyscraper.

It is also negotiating leases for space in 237, 245 and 277 Park Ave., according to the New York Times, as it prepares to vacate its longtime headquarters in the Union Carbide Building to begin the largest voluntary demolition in history.

“JPMorgan has long been a stalwart of the Grand Central District, and their continued long-term commitment will serve as a major boost to this iconic Midtown neighborhood,” L&L Holding Co. Chairman and CEO David Levinson said in a statement. “We are proud to welcome them to 390 Madison Ave.”

To renovate 390 Madison, L&L — funded by the New York State Common Retirement Fund via investment advisor Clarion Partners — removed tons of steel and concrete from the base to build new floors on top of the building, and more efficient floor plates in the rebuilt base.