Inside The Supertalls: Central Park Tower

There are several supertall towers (taller than 984 feet) on the rise in NYC. We've been researching what it takes to dramatically change NYC's skyline.

We started with Macklowe Properties and CIM Group’s 1,396-foot 432 Park Ave, then we looked south to China Oceanwide Holdings’ 1,436-foot 80 South St and, last week, we jumped across the river to look at Brooklyn’s first supertall tower, JDS Development and the Chetrit Group’s 1,066-foot-tall 9 DeKalb Ave. 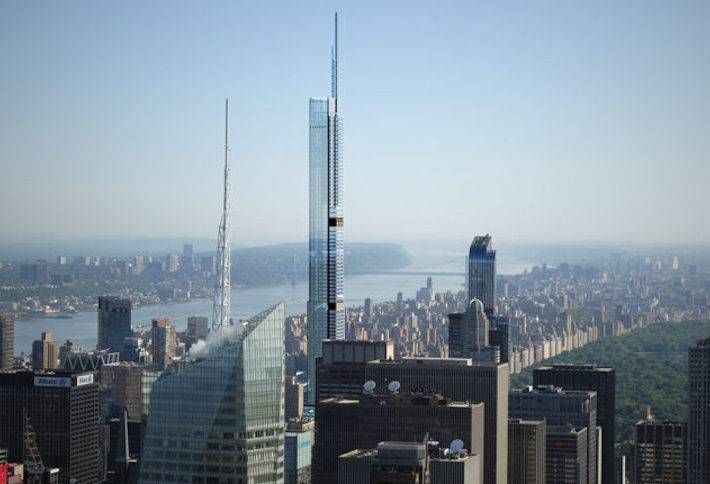 Courtesy of Extell Development
A rendering of Central Park Tower

Extell assembled the site in 2005. Because Vornado is constructing 220 Central Park South across the street, Gary Barnett's firm was forced to purchase the air rights and build a cantilever over the Art Students League of New York's building. Fortunately for Extell, the League voted in favor of this measure.

More than a dozen storefronts near the foot of the tower have been vacant for more than two years as landlords await the tower’s completion, hoping to earn higher rents and choose tenants that’ll mesh with the neighborhood’s “future character.”

In an interview with DNAinfo, Manhattan Borough president Gale Brewer said the tactic was “detrimental to the neighborhood...a deterrent to pedestrian traffic on that side of the street, and it’s a killer for the businesses that remain there.” 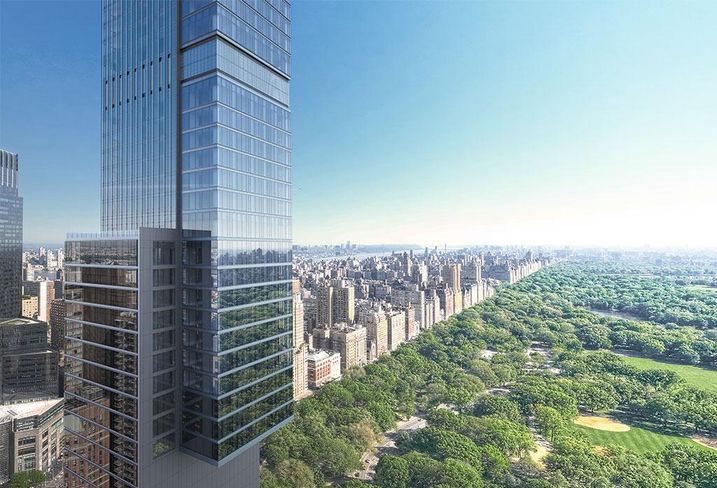 Barnett’s seeking more than $2B in debt and equity for the Central Park Tower and fellow supertall One Manhattan Square, but getting this financing together has been anything but easy.

The first bump came when Extell’s Israeli investors started panicking as Manhattan’s high-end condo market struggled, and as Extell’s $300M in bonds sank as low as 86 agorot on the shekel on the Tel Aviv Stock Exchange after Extell announced its JV with Scott Rechler’s RXR Realty. Barnett attempted to calm investor nerves, but it didn’t go well.

In the last few weeks, Barnett was able to lock down $300M in equity from SMI USA—the US subsidiary of Shanghai’s largest state-owned enterprise, which has successfully completed 80 megaprojects in the past—for Central Park Tower.

SMI’s financing has harsh conditions: if Extell can’t meet SMI’s financing deadlines, the Chinese company won’t only take its money back, but force Barnett to buy back its equity stake for $300M, plus interest. If Extell can’t buy SMI out by July 2018, SMI can push it to sell the whole project. Extell also needs to get SMI’s blessings for all critical decisions, and documents filed in Delaware hint the project may even be renamed the SMI Central Park Tower.

Extell still has to source a $900M construction loan, which would be one of the largest issued to a New York developer this cycle, and quite difficult at a time when most lenders are growing cautious about lending to luxury properties. Several names have been rumored for the loan (JPMorgan Chase and the Korea Investment Corp) but none have been confirmed.

And Garyhas three months to repay a $235M land loan he secured from the Blackstone Group in 2013. He seems to be counting on securing the construction loan to repay Blackstone, rather than refinancing. If he doesn’t pay Blackstone back by the deadline, the loan goes into a one-year standstill agreement where Blackstone can’t demand an immediate settlement until the latter part of 2017. The interest rate on the loan will shoot up from 8% to 14%.

To make some headway on the remaining capital, Extell has begun searching for EB-5 funding, which it has used several for projects in the past. The program was recently extended until December, but proposals could curtail the number of projects eligible to accept EB-5 money; increase the minimum investment amount for EB-5 applicants from $500k to $800k for projects in high unemployment areas; or require existing investors to retroactively pay additional amounts.

Extell has sold off several assets, including sites at 134 West 58th St at 12 West 48th St. It’s also looking to sell a site at 30-32 East 29th St. Barnett said the funds from these prospective sales won’t be solely used for CPT.

Simply put, Extell and the tower have a lot of balls in the air, and many believe Extell will eventually cancel the project. Gary is optimistic, insisting that “there are still a lot of people who want to buy” and that he’s pricing his projects based on their merits. 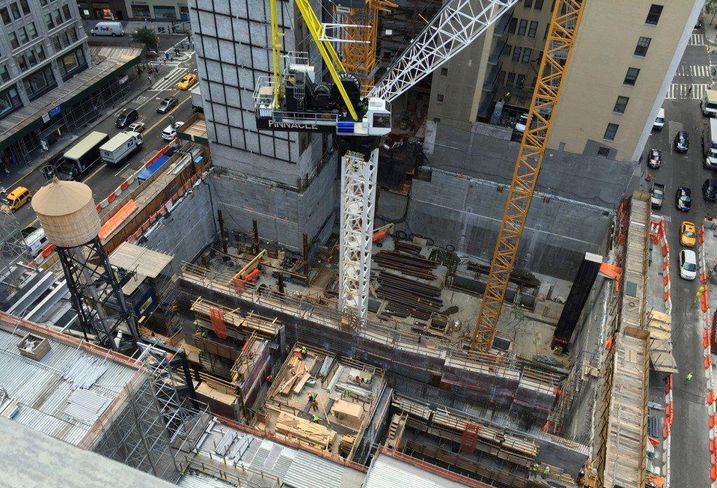 Adrian Smith + Gordon Gill Architecture, which designed the Jeddah Tower in Saudi Arabia, is slated to design the building. Plans originally called for 182 units selling at $6,500/SF, but a new offering called for 179 units with no specified price. Last year, the firm announced that it would be removing the ornamental spire from the building’s design.

Floors eight to 12 will house amenity spaces for residents, including residential and retail storage for 125 bicycles, a valet, a “tenant tween lounge,” and a cigar room. The eighth floor will have an outdoor terrace, an outdoor swimming pool, a sundeck, tenant lounges and banquet rooms. The 10th floor will have an exercise room, a treatment room, a swimming pool and a wading pool.

Residences will start on the 12th floor with the lower floors having up to six units per floor. The number of units per floor will decrease higher in the tower, with floors 47 through 66 having two units each, a duplex across the 68th and 69th floors, one unit per floor from 70 to 88, and a quadruplex occupying the 89th through 92nd floors.

The building, assuming the complex financials come to fruition, is slated to complete in 2019, and could have a sellout of more than $4B.