Biggest Multistory Warehouse In The U.S. Planned For Brooklyn 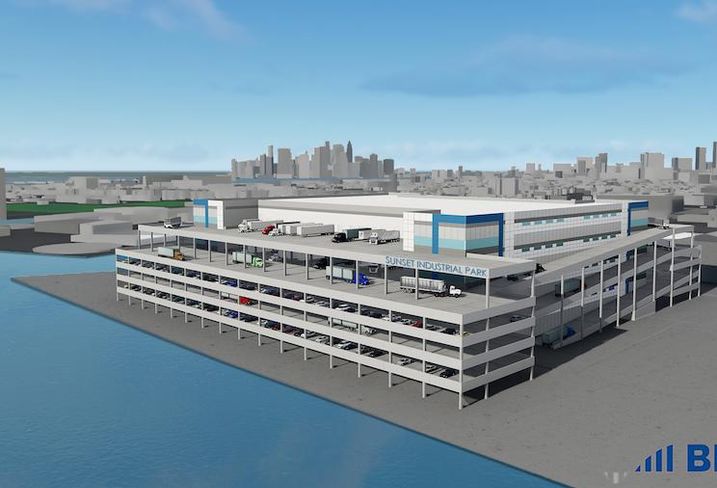 As retailers continue to seek ways to deliver their products to as many customers as possible as fast as possible, developers are building bigger and taller than ever to help them.

Bridge Development Partners and DH Property Holdings have joined forces to acquire an 18-acre site in Brooklyn, where they plan to a build a four-story, 1.3M SF distribution center, the largest multistory warehouse in the United States.

Bridge and DH, run by developer Dov Hertz, plan to demolish the existing brick industrial buildings on the site and replace them with the behemoth. The warehouse would allow trucks to access all four floors, with 38-foot clearance heights on the bottom two floors and 28-foot clearances on the top two.

“This will be a groundbreaking project for the U.S. industrial market, not only because of the building’s unprecedented design — essentially, four separate, stacked distribution centers — but also because of the enormous benefit it will have from a ‘last mile’ standpoint,” Bridge Northeast Region partner Jeff Milanaik said in a press release.

The JV expects to start demolition early next year and to begin ground-up construction before the end of 2020. It was unclear whether the developers would wait for a tenant or begin construction speculatively.

Hertz is a pioneer in New York multistory warehouses, planning the first ground-up facility in Brooklyn's Red Hook neighborhood last year. The new design of the facilities — which are traditionally single-story boxes in suburban or rural locations close to major highways — has become palatable as retailers look to be able to deliver across New York City within days or hours of receiving an order.

“Located within 5 miles of the Verrazano bridge, and within a one-hour drive of 13 million consumers, Sunset Industrial Park presents the perfect location for last-mile distribution,” Hertz said in a statement.

CORRECTION, JAN. 28, 11 A.M. ET: A previous version of this article misstate the purchase price of Sunset Industrial Park. It was acquired for $255M. This story has been updated.