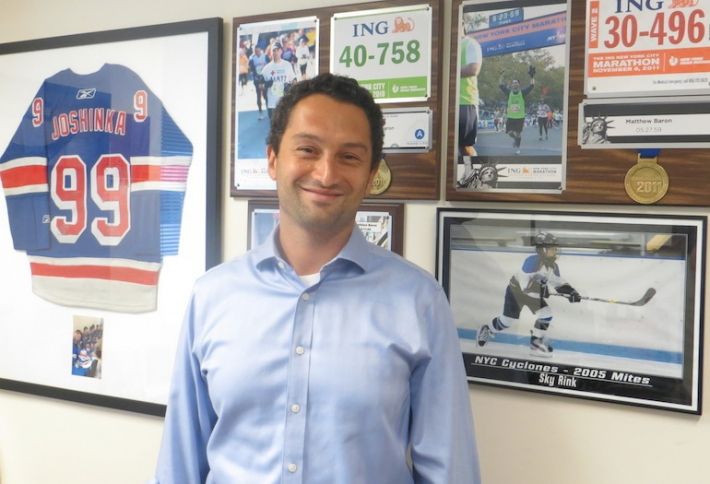 Simon Development recently was renamed Simon Baron Development to reflect Matthew Baron’s partnership in the company since ’06. It's acquired $1B of properties since then and has $800M in development, mostly in Manhattan.

Matthew was born in Kishinev, Moldova, then part of the Soviet Union, and his parents emigrated to Brooklyn when Matthew was 3. He grew up in Midwood and then Coney Island and dropped out of college after less than a semester because of shaky family finances.

Instead, he got a job with Chase Manhattan Bank selling financial products to high-net-worth customers. That skill led him to Wall Street. He didn’t know equity from a football, he says, but for every five days anyone else worked, he worked eight. Soon, Morgan Stanley recruited him (to acquire his book of clients), and it wasn’t until the third interview that it realized he didn’t have a degree. It hired him anyway, and he was one of its top five stockbrokers for his first six months.

The industry got to him, though, particularly the brokers who hid from clients after the dot-com bubble. So he quit and, considering his now-wife Marlene wouldn’t marry him until he got a degree, went to NYU Stern, graduating in just two years. He studied so much and the commute to Coney Island was so long that he slept on the couches downstairs at Bobst Library two nights a week. Now, he’s an adjunct at NYU Schack (which we assume gives him dibs on the comfy couch).

Marlene also can claim an assist for Matthew scoring his first real estate job. While he napped on a plane on the way back from vacation, she struck up a conversation with the woman next to her, whose husband also was asleep. That woman was the wife of Pergolis Swartz founding partner Jerry Swartz.

Jerry and Matthew did a couple billion dollars of real estate financing while Matthew both worked full time and got his MBA at Columbia (he also helped edit Bill Clinton’s autobiography, My Life). Though Matthew was on the partner track at Pergolis Swartz, he’d always appreciated the tangibility of his developer clients’ work, so when he crossed paths with Jon Simon, Matthew joined Simon Development. He remains close to Jerry, though, and Jerry's current venture, HKS Capital Partners, does most of Simon Baron’s financing.

When Matthew came on board, Simon Development owned a handful of walkups and had just started its first big project, the 42-story Tower 31 apartments on 31st between Fifth and Broadway. He helped the company finish that project, and it's kept up the pace since: Among others, they bought the debt on the failed LIC condo Crescent Club, foreclosed, finished the 130 units, rented them, and last year sold it for $80M.

Now, Simon Baron is renovating a neglected 140k SF building at 79th and West End Avenue into family-size luxury units and converting a foreclosed 200-unit SRO on 75th between Columbus and Amsterdam into smaller, more price-conscious ones. Then there’s the site on 31st between Fifth and Madison that the company held through the crash and has since recapped; now it and London-based Quadrum Global are building one of Commune Hotels & Resorts' first Tommie hotels for young, global travelers.

The company’s most recent deal was a rare-for-it market-rate acquisition: $105M for 12 E 88th between Fifth and Madison. Simon Baron plans to convert the prewar apartment building into luxury condos. It's open to other boroughs, too. It’s developing a 500k SF apartment building at 29-26 Northern Blvd on what Matthew says is one of the last LIC land deals on which apartments will still pencil out. The company also is building 250k SF of apartments on LIC’s Vernon Boulevard on the site of the old Paragon Paint Factory.

Meanwhile, Simon and Jon have signed a lease to move from a small office in the Helmsley Building to 6,500 SF at RFR's 757 Third Ave, enough room to double the roster of 15 employees.

Life's an adventure at home, too. Matthew’s 8-year-old, hockey-playing son rushed the goal during a friendly game of soccer this weekend and broke Dad’s toe. Matthew and Marlene also have a 6-year-old daughter.