Industrious Teams Up With Williamsburg Hotel To Provide Private Offices 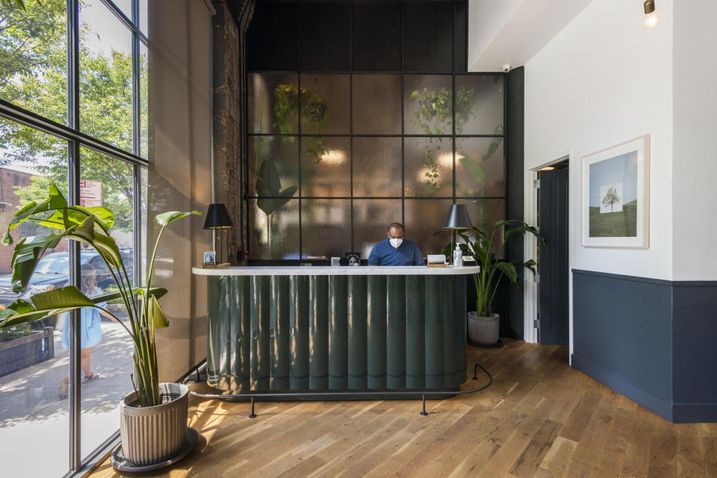 One coworking company is teaming up with an independent hotel to provide private offices at a daily rate.

Industrious, which was founded in Brooklyn in 2013, is going back to its home borough to join forces with the Wythe Hotel in Williamsburg to provide private offices for up to four people for $200 to $275 a day.

“We’re trying to get back to practicing hospitality under somewhat difficult circumstances where gathering humans together is the wrong thing for any of us to be doing right now,” Wythe Hotel owner Peter Lawrence said. “So this is a way we can offer a really safe experience and have people come and utilize the hotel and give them some hospitality.”

From July 9 through Aug. 31, the rooms are available to rent from 8 a.m. to 6 p.m. It is $200 per day for one person, $250 per day for three people and $275 for four. Complimentary coffee, snacks, a New York Times subscription, a landline and a smart TV are all included.

Industrious approached The Wythe Hotel about the partnership looking to give Brooklynites a safe office option closer to home than the central business areas of Manhattan, Industrious co-founder and CEO Jamie Hodari said.

“In New York, people really, really want local workplace options,” Hodari said. “It’s true that not all New Yorkers want to sit out of their living room apartment all day every day for the next year of their life, but many of them also don’t want to get on a subway and go to the Financial District or go to Midtown five days a week.”

Industrious is seeing increased interest in localized, private office space in its other Brooklyn locations, he said.

The hotel’s rooms have been repositioned into office space, and each comes with a terrace.

“By minute four, it doesn’t feel like you’re working out of a hotel room,” Hodari said.

The Wythe Hotel was one of many throughout the city to pivot to public service at the height of the crisis. It provided rooms to healthcare workers, some of whom were sleeping in their cars to protect their families before the hotel room offer. Through all of that, not one of its staff members got sick, Lawrence said.

As the health crisis in New York has become less dire for now, its rooms are attracting locals rather than the global audience it once did.

“When thinking about how to cater to this much more local group of potential hotel guests, we thought of offering them an opportunity for many of them to get out of their home office and have a space where it's clean and you don’t have to clean up after yourself,” Lawrence said. "It’s different and it’s quiet, and it’s safe."

This comes at an unpredictable time for hotels and offices. Hotels throughout the city have shown signs of distress, some even announcing permanent closures. Many New Yorkers chose not to return to offices despite being allowed to in June.