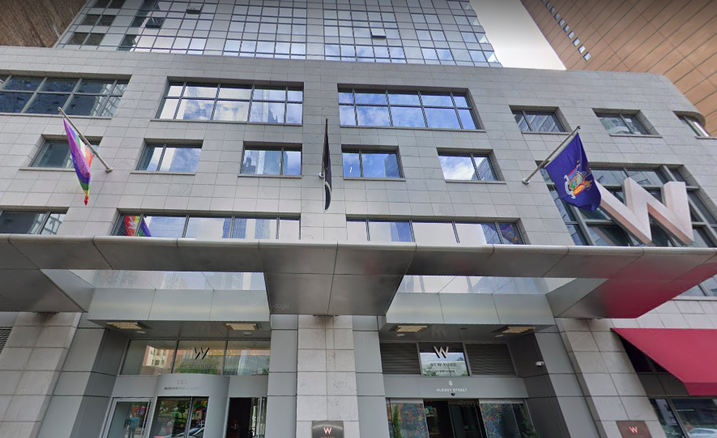 The Marriott-owned W Hotel in lower Manhattan won’t open its doors again, according to labor filings recorded this week.

The 217-room hotel at 8 Albany St. will permanently close on Oct. 13, according to a Worker Adjustment and Retraining notice filed by Starwood Company & Resorts, which Marriott International acquired in 2015. The closure affects 137 hotel workers.

The downtown W Hotel is the latest hotel to announce it will remain closed: in April, the Maxwell Hotel on 12 East 53rd St. announced it would shutter permanently, while The Omni Berkshire Place hotel on 21 East 52nd Street did so in June.

Other pricey hotels — such as The Mark on the Upper East Side — have defaulted on their mortgages, prompting mezzanine lenders to initiate foreclosure proceedings in an attempt to gain control of the property. The Mark has since reopened.

With tourism significantly down, experts say 20% of hotels across the city could potentially never reopen.

Hotel occupancy rates have been low since March. STR Senior Vice President Jan Frietag told Bisnow in an interview earlier this month that the market data group predicts overall occupancy this year will average 42% to 43% in hotels that remain open, he said. Hotel owners are not optimistic about the remainder of the year.

“I think many folks are writing off 2020 and hoping for a reset come Jan. 1, so that’s the bad news,” LW Hospitality Advisors CEO Dan Lesser told Bisnow in an interview earlier this month. “But the good news is that it will end at some point. ... There is so much pent-up demand out there, and there will be more by the end of the year.”