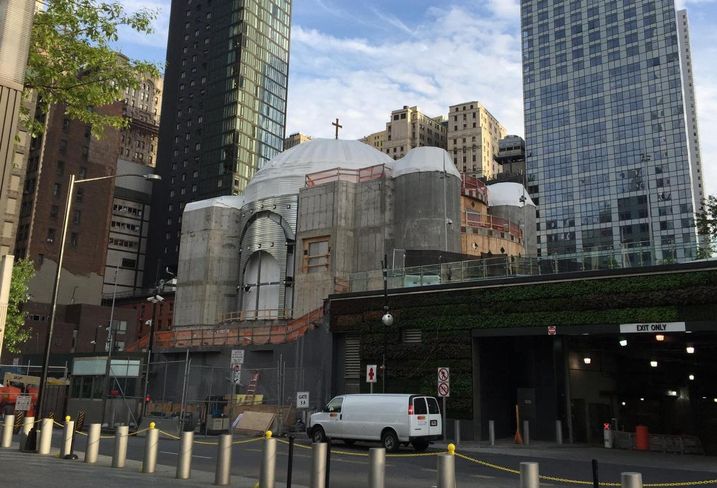 Flickr/Rex Hammock
St. Nicholas National Shrine, mid-construction as of May 2017

Amid a wide-ranging financial scandal at the Greek Orthodox Archdiocese of America, construction has halted at the St. Nicholas National Shrine.

Construction firm Skanska USA issued an order to all of its subcontractors at the site to stop work immediately and remove all of their tools, saying that it was pulling out of the project after a series of missed payments by the Archdiocese, Commercial Observer reports.

The shrine is set to replace the St. Nicholas Greek Orthodox Church near the World Trade Center that was destroyed in the Sept. 11 terrorist attacks, but funds that were set aside for the project were misappropriated by church leaders to fund expenses by the GOA's spiritual leader, Archbishop Demetrios, according to an email from the organization's treasurer, Michael Psaros, to its managing council.

The GOA claims it will be undertaking sweeping changes after a full audit of its financial policies, which Psaros said "lacked even the most basic controls with respect to expenditures, vendor and travel management and other basic matters of basic corporate governance,” according to CO.

The site sits at 130 Liberty St. in Liberty Plaza Park, on land owned by the Port Authority of New York & New Jersey and leased to the GOA for $1. Designed by architect Santiago Calatrava with marble sourced from the same vein that provided the materials for the Parthenon, the National Shrine is meant to be both a church and a nondenominational grieving center, with the cost originally estimated at $35M.

Representatives from Skanska USA told CO that they anticipate resuming work when its outstanding fees are paid in full.