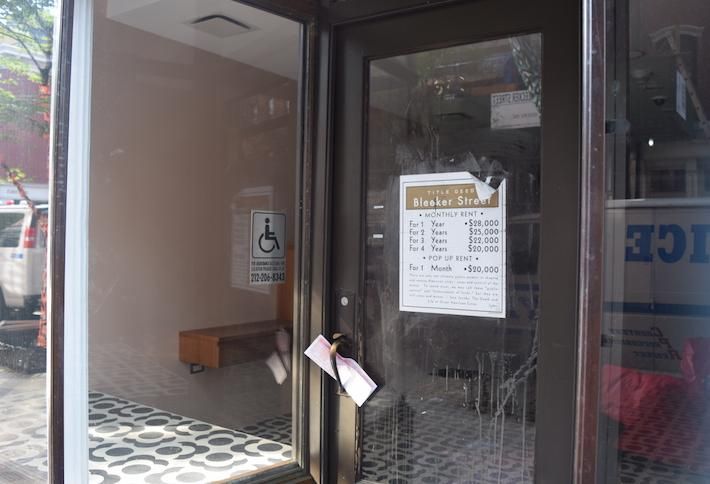 Bisnow/Miriam Hall
An empty storefront on Bleecker Street in 2018. Retail has already faced enormous challenges in the city.

Commercial rent regulation is back in the spotlight, with one New York City Council member set to introduce a bill aimed at implementing rent caps as soon as next week.

The aim is to deal with the widespread retail vacancy issues that are plaguing the city, amid widespread store closures and bankruptcies.

"It's fair to property owners," Levin told Gothamist. "We’re certainly not taking away their livelihoods. We’re saying there has to be some fair rubric in all of this to allow smaller businesses to compete for their existence."

The idea of commercial rent control came up this summer, with Council Speaker Corey Johnson pushing for renewed debate on the Small Business Jobs Survival Act, which has existed in some form for the last 33 years but has never come up for an official vote. Johnson said after a public discussion on the bill that he had some concerns about the concept, per Gothamist.

Retail vacancy is an ongoing concern in New York City, with high rents often blamed as a major cause. The amount of vacant space doubled between 2007 and 2017, according to a recent report from the Comptroller’s Office and landlords have worked for years to solve the problem with pop-up stores, short-term deals and trendy uses like boutique fitness.

The potential new laws come just months after broad changes to the residential rent regulation laws were passed at a state level, and members of the commercial real estate industry have said they are concerned about what kind of governmental regulation may be still yet to come.

Others have railed against politicians and rules they consider unfriendly to business.

“The political environment is the worst I've ever seen,” L&L Holding Co. President Robert Lapidus said at the Real Estate Board of New York’s fall luncheon last month. "I always used to think that the mayor of New York City had a much bigger impact on my business life than the president. And now there's a situation where they're both having severe adverse impact."