So many developments are going up Downtown, it's hard to keep up. We found the best way to count was to put them on a panel, hence Bisnow's Future of Downtown Manhattan at Brookfield Place a week from today. 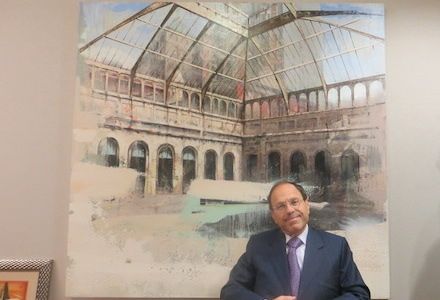 Among the 15 pros speaking will be GFI Capital Resources president and GB Lodging co-founder Allen Gross, owner of 5 Beekman St, which has been boarded up for 20 years. The 130-year-old, Landmarked property is undergoing a $350M reinvention, including a 200k SF new tower, Allen tells us. It'll deliver in July 2015 with 287 hotel rooms spread across the existing, 150k SF Temple Court building and the first 19 floors of the new tower. Condos will start 180 feet high, on the 20th floor of the new building. The project also will include 6,000 SF of indoor and outdoor event space and the kind of major-league restaurants that make for good client dinners. There isn't much in either of those categories Downtown, Allen says. (True, but if you hold power lunches at a bodega outside the Canal Street subway, you don't have to wear a tie.) 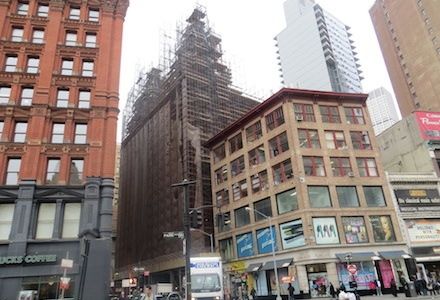 We can't show you the new look yet (Allen's a man of mystery until the property is ready), but we snapped the scaffolding surrounding the massive reconstruction. He tells us the hotel's design will be timeless, as if it's been a hotel since its delivery in 1881 (it was built as an imitation of London's old boys clubs). Along with the Four Seasons that broke ground yesterday a block away, it'll capitalize on weekend guests; 15 million annual visitors are projected Downtown, drawn in not just by the perennial Wall Street bull and the Statue of Liberty but by the WTC, 9/11 Museum, South Street Seaport, and the birth of Downtown retail. 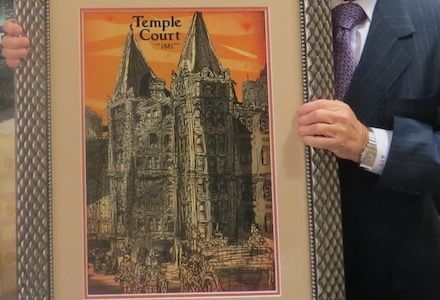 The project is a career definer, Allen says, as he's been working Downtown since 1991 and has watched its transformation, so no wonder he got three paintings of 5 Beekman St for his birthday. His kids commissioned the painting behind him in the photo we snapped in his office at top. It's the view from the atrium, which had been boxed off for 45 years and offers skyward views of the Woolworth Building, Frank Gehry's 8 Spruce St, and 1 WTC. Meanwhile, the Ace Hotel GM and his wife commissioned the above painting. And while the artist was outside working on it, GFI hotel development head Eric Bass passed by and liked it so much he pre-ordered a lithograph, which hangs at Allen's home. All he was missing, Allen says, was a birthday cake in the shape of the building. Sign up for our Downtown event here!