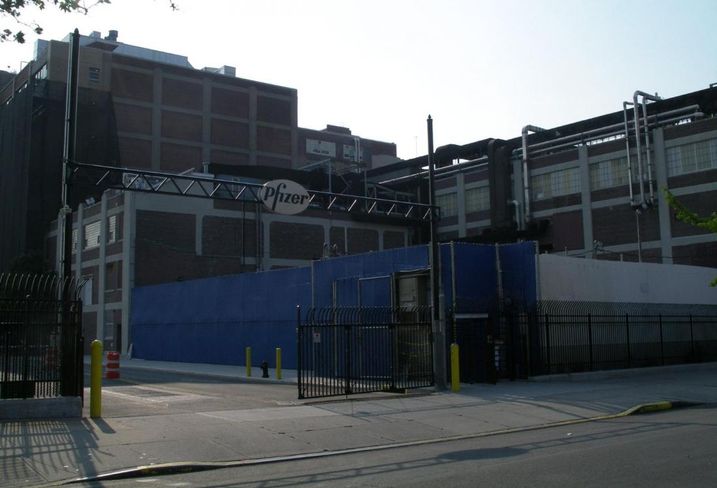 Flickr/Matthew Rutledge
The Pfizer Building in Williamsburg, Brooklyn, vacant since 2007

The plan to convert land near the former Pfizer building in Williamsburg to mixed-income housing has passed its second-to-last hurdle.

After Pfizer left its plant in 2007, it sold the 4.6-acre lot, bounded by Harrison and Union avenues, from Walton Street to Gerry Street, to Rabksy Group in 2012 for about $12M. Vacant since the 1980s, the lot's plan calls for 1,146 units of mixed-income housing, 65K SF of retail, and a half-acre of public space. Rabsky subsidiary Harrison Realty plans to fund the project entirely with private financing.

Twenty-five percent of the development, or 287 units, will be designated as permanently affordable under the Mandatory Inclusionary Housing policy. The MIH requires affordable units be included in any development that requires a rezoning, such as industrial to residential.

The only remaining hurdle to clear for the project is approval from the New York City Council, largely dependent on the council member who represents the district in question; in this case, District 33 representative Stephen Levin.

“It is a positive step that the City Planning Commission has voted to approve the Pfizer redevelopment project,” Levin told REW. “As an MIH project, this project would bring the first mandatory affordable housing units in South Williamsburg in many years. We look forward to taking up the proposal next at the City Council.”

Rabsky has pledged to pay service workers on the project the prevailing wage as determined by the Department of Labor, as well as hiring local workers for the construction and management of the development. If the council gives its approval, the project is scheduled to begin in 2018 and deliver by the end of 2019.