Newark: It's Time to Retell Our Story 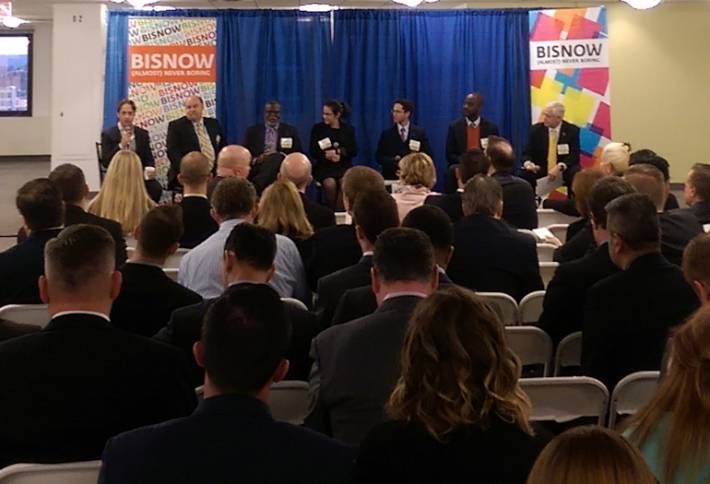 When Newark Venture Partners managing director Tom Wisniewski grew up in the '70s and '80s, Newark was a place you were told never to go—if you did go there, you would die. “Unfortunately, some of that still lingers on in people’s memories,” he told the crowd during his keynote at our Future of Newark event at 2 Gateway Center on Nov. 12. We can change that by telling the story of the Newark of today, panelists said.

Tom recalls a year ago when Audible founder and CEO Don Katz reached out to his network to try and “find a way to create more Audibles in New Jersey.” He had moved his company from Wayne to Newark to make a statement, believing in urban renewal and Newark, and he wanted to do good here. “People thought he was crazy,” Tom said. But Don moved 100 people, didn’t lose a single employee and thrived. He later partnered with Amazon.com and grew to 800 people in Newark. Tom points out that it proves Newark can attract the hardest people to recruit—young Millennials who are interested in tech, yet have other opportunities. “How can we do more than that?” Tom had asked. And thus a technology community was born around Newark’s fantastic bandwidth availability.

Newark Venture Partners, along with Audible, Rutgers and other partners, has launched a 25k SF tech space at One Washington Park to incubate software-enabled tech companies, helping them grow within Newark and rev the economy. Tom says he was initially skeptical about the idea. “Social impact, accelerators and cities don’t have a great history of success,” he explains. But he was immediately taken by the thoughtfulness of what they put together and how the partners were using market force to stay away from the traps that led efforts elsewhere to fail. He says they learned from similar projects in Detroit and Downtown Las Vegas about using social enterprise to drive economic impact.

If the partners do this well, they’re going to get high-growth, high-margin companies that can scale quickly, will be valuable, grow and have a financially awarding exit. These tech companies also create benefits for Newark by bringing jobs, companies and foot traffic to the city. The space is backed by a $50M fund; $20M has been raised already, Tom notes. The money will help early-stage companies in the space, which is under a rent-free lease from Rutgers. Over the past 90 days, they’ve fit out the modern co-working space. Its neighbors—including Audible and Rutgers—will encourage even more companies and investors to come. 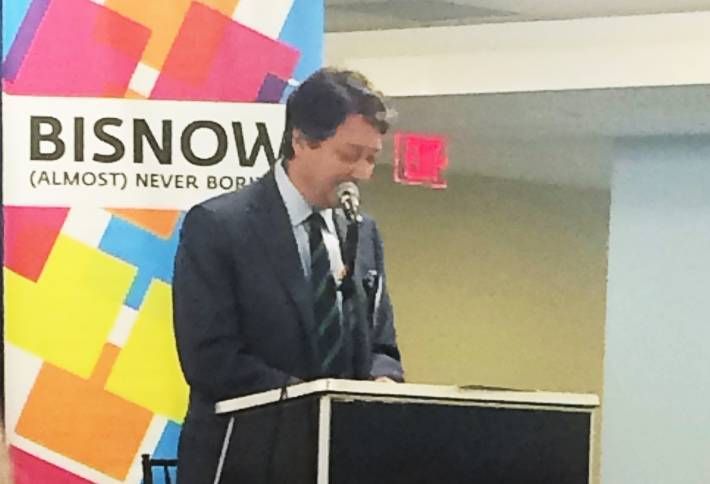 WNET CEO Neal Shapiro, the keynote whose public broadcasting station hails from Newark, says it’s also within WNET’s mission statement to be media with impact—not shows that make you wonder who will get kicked off the island next or feature surgically enhanced housewives. The station wants to educate, entertain, inspire and help make a difference, he says, and that’s why Newark is the right place for the HQ.

He compared himself to his “if it bleeds, it leads” competition, and says that WNET focuses on what issues matter most to New Jersey, including public policy, taxation, education, economic development, and arts and culture. The latter, he says, is prolific but under-publicized, and Newark is home to much of this cultural scene—think NJPAC, the Newark Museum, the Prudential Center, Newark Symphony Hall, the public library and Military Park, to name a few. “I see a city that’s filled with the art of possibility…I see arts that can bring people together, build new coalitions and strengthen communities.” 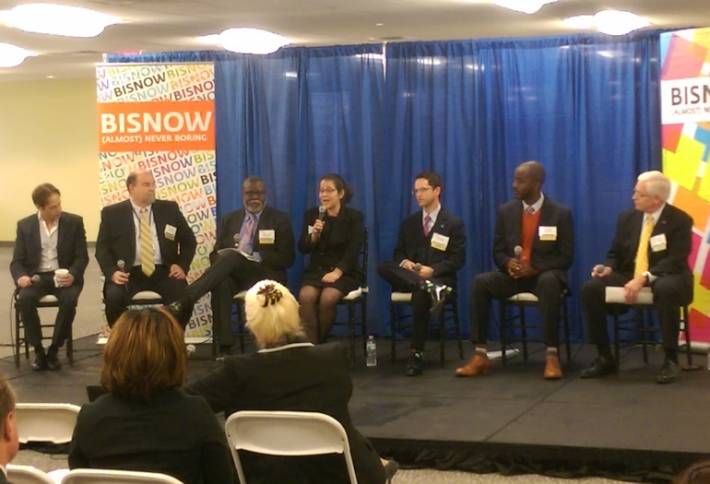 Brian reports there’s a lot on the plate for Audible; first and foremost, its growth and expansion in the Broad Street corridor. He says 15 James Street will be lit up in the same fashion as One Washington, and as mentioned, the company is involved in the accelerator. There’s been a number of innovative projects that Audible has been working on the past few years in Newark, like the ability to listen to an audio book through Audible, and then pick up where you left off by reading on your Kindle.

Newark’s incredible bandwidth is why technology and other firms that rely on large files can thrive here. Seth points out architectural firms, data sciences and film and television companies as a few. And the bandwidth is exponentially cheaper than it was even two years ago. “The cost being driven down will allow more and more companies to take advantage of it. But it’s not just for business or delivering products or services, but for home computers as well. “People do not accept anything less than a sub-second response time,” he notes. This bandwidth is part of Newark’s story, he says, as the city serves as the nexus and confluence for the entire state.

When people think of Newark or even New Jersey, they don’t think sexy or fast Internet. “I want them to think we are sexy, and for us, it’s about changing the narrative…it’s about marketing and repositioning the city in a way in which we don’t have to embellish or make anything up. We just have to tell our story," Otis says. "That’s a real big change in how we’re doing business.”

He notes that Newark CEDC’s tagline is “Newark is open for business.” What does that mean? It’s a place where businesses can not only improve their bottom lines, he says, but find employees to expand their businesses. Next year is Newark’s 350th anniversary, and it’s the third-oldest city in the United States. “It’s a great opportunity for us while we’re highlighting our rich past that we start talking about Newark 3.0 and really frame our future.”

RBH Group bringing AeroFarms to its Makers Village project in Newark was a result of telling the neighborhood’s story, Ron says. The neighborhood clearly wanted green jobs, no more residential and no more retail. It wanted 21st century manufacturing jobs without the obnoxious fumes and trucks. Today, the project’s mission includes relaying the history of a neighborhood with a rich past, its nexus to transportation, and its access to customers, power, technology infrastructure and human capital. “It becomes a very easy story to tell,” he says.

Companies moving to Newark will need trained workers—and ones who want to stay in Newark, Roland says. That’s why multiple higher education institutions have come together to launch the Newark City of Learning Collaborative, a citywide initiative to increase the percentage of residents with post-secondary degrees, certificates and quality credentials from 17% to 25% by 2025. This is indicating that the higher education, private sector and nonprofit worlds want to focus on its young people and adult learners. “Over the next few years, we want to help people see a clear path from school to work. It’s not easy, but the Collaborative…is starting to work. Stay tuned.”

Amy says that Newark was not an easy place to recruit people to come to work, but that’s changing. She’s been here for nine years now; when she first came, people asked “Why Newark?” She replies that she looked at its opportunities and accessibility, and that’s part of the story she tells people. (In fact, she was born in Manhattan and never learned how to drive. She lives in Newark because she can get to work in 10 minutes and be in Manhattan for a breakfast meeting in 20 minutes.)

“We’re seeing change here,” she says. “Newark is becoming very, very exciting to work in.” Case in point: When she first started working at WBGO, it was difficult to get people to come in for interviews. The other day, she posted a job for a high-tech position and received 86 résumés—just two years ago, she may have only had four. “The feeling of collaboration that exists in this community, I’ve never found anywhere else.”

Ron says that RBH’s Teachers Village project was a function of collaborations between numerous public entities, private institutions and nonprofits. “There were 25 boards that needed to approve the project,” he points out. A decade ago, you couldn’t even get anyone to think of living in Newark, “and today, we can’t build the units fast enough.” Residential units under construction are pre-leasing, and some of its buildings are even delivering at 100% pre-leased.

One thing is for sure—Newark is not trying to be the next Brooklyn. “We don’t want to be the Sixth Borough,” Otis says. “Jersey City can do that, God bless them, but we have 350 years of experience.” 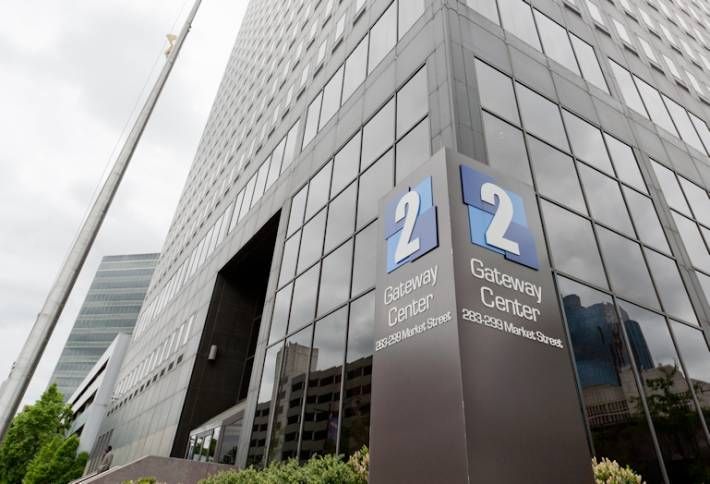 The event was held at 2 Gateway Center, which is owned by sponsor C&K Properties. The 18-story, Class-A building is in the heart of Newark’s “Billion-Dollar Triangle,” where it has direct access to Penn Station, the 250-room Hilton Gateway Hotel and a conference center. Additions to its concourse this past spring include The Gateway Project—consisting of a gallery space, rentable artist’s studio and work spaces—and NJTV’s Agnes Varis Studio, which allows people passing through the concourse to look directly into the studio, home to NJTV News with Mary Alice Williams.

The building is the first in New Jersey to earn Platinum certification from WiredScore for its best-in-class infrastructure and connectivity. Its recently renovated lobby includes the addition of free, ultra-fast WiFi, as well as a gourmet coffee bar and cafe Cotidiano. 2 Gateway Center also provides an innovative concierge program and mobile app through which brokerage professionals and companies can obtain free, customized analysis of the cost savings for prospective tenants under the New Jersey Economic Opportunity Act of 2013.