Though Deal Volume Is Declining, CRE Transactions In All Sectors Still Surpassed $100B In Q2 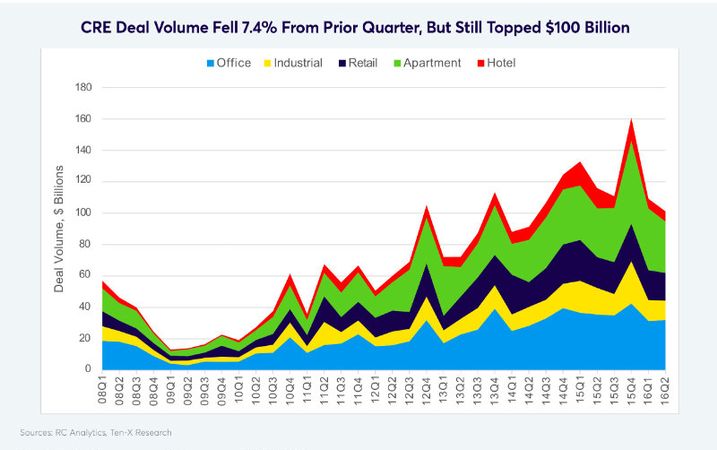 Transaction volume across the five asset classes within commercial real estate declined in Q2, continuing a downward trajectory. In a recent report, Ten-X said total deal volume for the five sectors reached $101.2B in Q2—a 12.7% decline compared to the year-ago quarter.

“Deal flow is down pretty much across the board in all the property segments,” Ten-X Research chief economist Peter Muoio (pictured) tells Bisnow. “Cap rates are also down—which is good to different degrees. Treasuries have been supportive in their decline over the course of the year, enabling cap rates to drop down in different segments.”

Last quarter alone deal volume dropped 7.4%, according to data from Real Capital Analytics—that’s the lowest quarterly total in two years. Despite the cooling in CRE markets, transaction volume still amounted to more than $100B, a sign of continued confidence in US real estate, Ten-X reports. 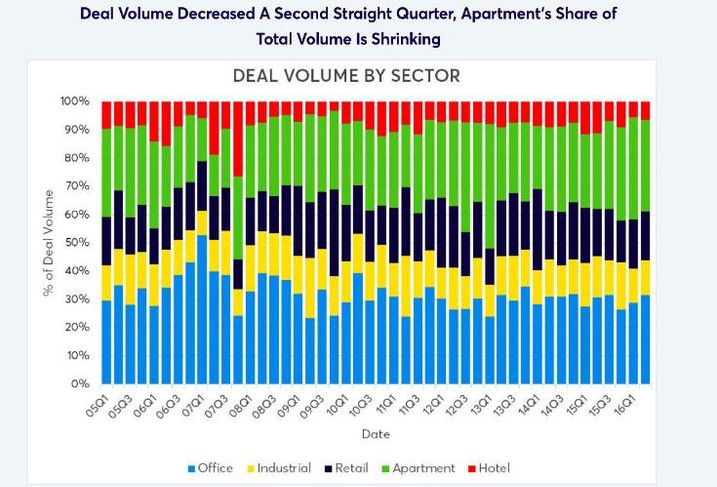 “That’s sort of the conundrum,” Peter says. “Generally speaking, deal volume is off about 14% year-over-year the first half of 2016. That said, the level of deal volume across the various property segment types is still high, meaning there’s still healthy deal volume.”

“[The hotel market] is approaching its peak levels and I think investors are seeing that,” Peter says. “Some of the sector's big markets are also vulnerable to the strong dollar, weakness in China and Europe, and a lack of foreign travelers, which is having an oversized impact on hospitality.”