Behind every successful chef is a well-designed restaurant — is that how the saying goes? The James Beard Foundation, in addition to naming chefs and restaurants at the height of culinary accomplishment, will name its Restaurant Design Awards recipients at its ceremony in Chicago on May 7. 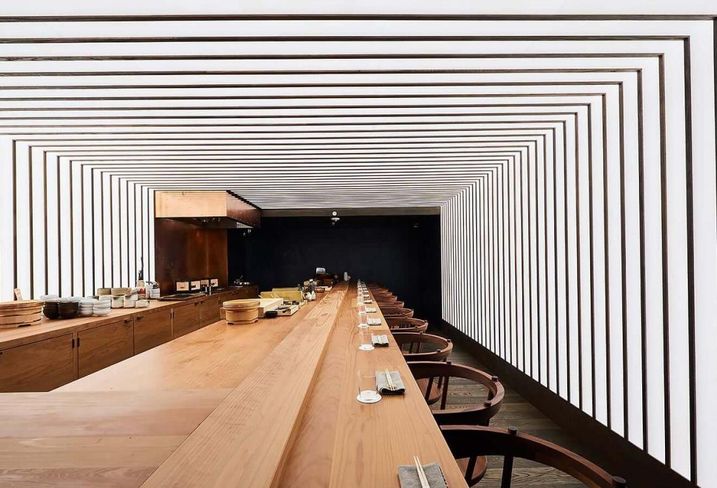 “The trend is away from minimal to maximal; away from single-purpose eateries to hybrid multi-activity spaces; and toward both domestically scaled spaces and very large spaces as well,” Biber said.

“Custom ceramics, light fixtures, site-specific art, mosaic tile and branded graphics are appearing in more spaces, as a way to separate a restaurant from the pack,” he said. “And nearly all spaces are working hard to give a diner insight into the personality of the chef, the owner or restaurant’s big idea.”

Here are the finalists in the running for the 2018 James Beard Foundation Restaurant Design Awards:

Otoko is a sushi restaurant on the grounds of South Congress Hotel in Austin, with two ticketed seatings per night of 22 courses.

“When animated, the marks ‘twinkle’ like Shibuya Station on a rainy night.” 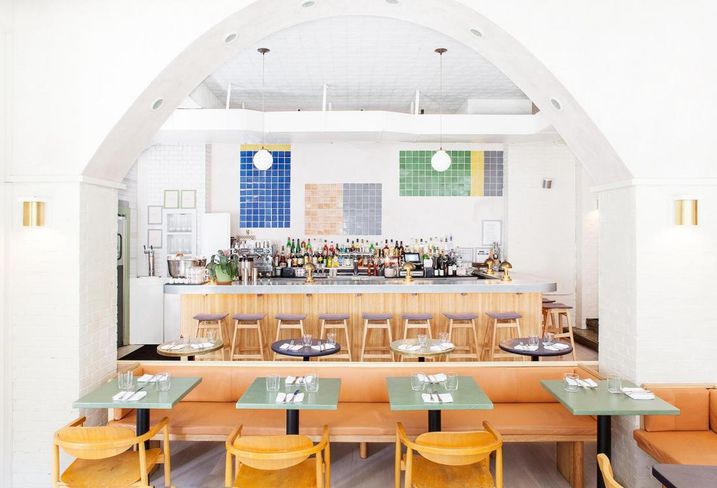 De Maria is a contemporary restaurant in the Nolita neighborhood of New York City. When the restaurateur asked The MP Shift to revive the venue into what it was in the 1960s, the designers used texture and plaster, tambour wood panels along one wall, ambient light and an intimate layout to bring back the reminiscent concept.

“The design highlights art and imperfection, so you feel it has been passed down by generations of local artists,” The MP Shift co-founder Anna Polonsky said.

The MP Shift designers created tributes to the area’s past, including a tile mural on the back bar wall. 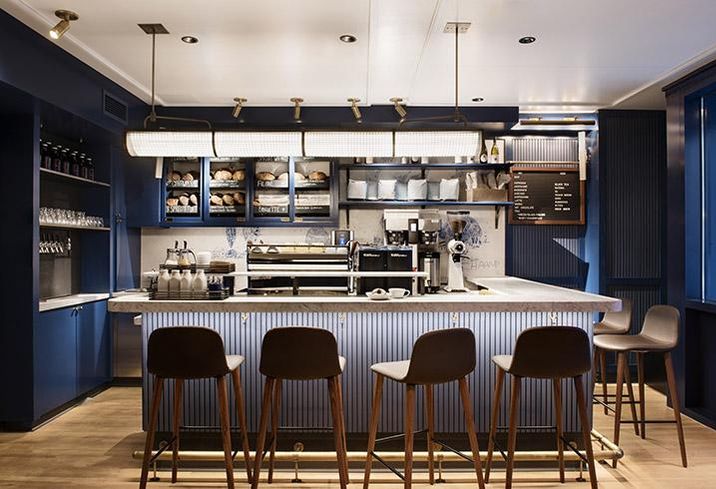 A small neighborhood café near Union Square, Daily Provisions offers breakfast, pastries, lunch and dinner in a space with communal tables set to resemble an extension of a visitor’s home or office space. The restaurant features a blue wood millwork interior with brass, wood and marble decor. 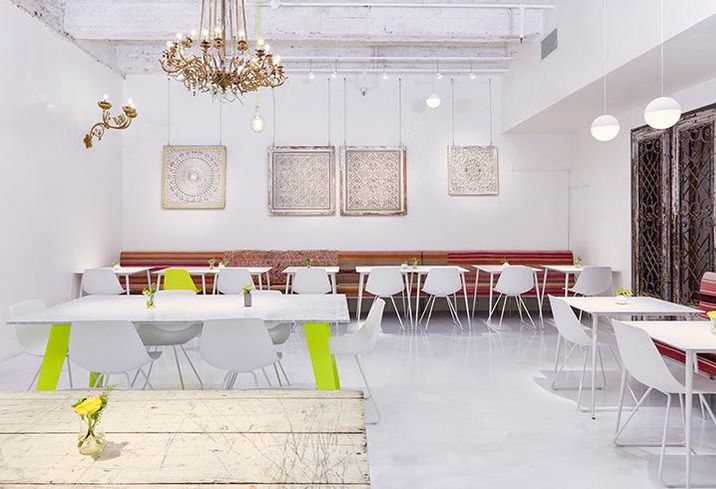 The nature-inspired vegetarian restaurant abcV is next door to design firm ABC Carpet & Home, and it features a concept that aspires to be in sync with nature, creating an interior contrast from the hectic energy of New York City.

“We are inspired by the essence of how and where the food we serve originates — light, the sun, phases of the moon, the warm tones of the sunrise and the richness of earth,” she said. 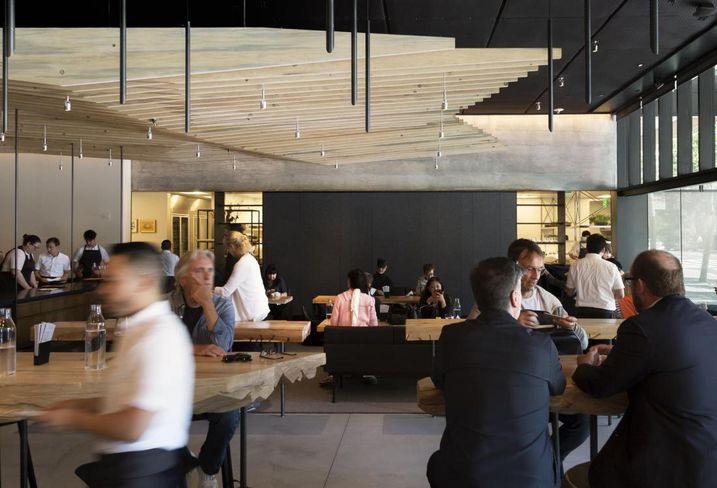 In Situ, housed inside the renovated San Francisco Museum of Modern Art, features a selection of dishes from chefs around the world. In Situ’s design is meant to emphasize its visibility from the street through a steel-framed window. It boasts a simple, open space with a neutral backdrop to show off the museum’s commissioned art, recycled wood tables, custom lighting and a sculpted, recycled wood ceiling.

“Innately inspired by the modern art museum in which it resides, the restaurant design sought to re-imagine the museum restaurant experience as an extension of the creative, thought provoking environment to which it is connected — a space for the confluence of art, food and culture,” Project Designer Adam Rouse said. 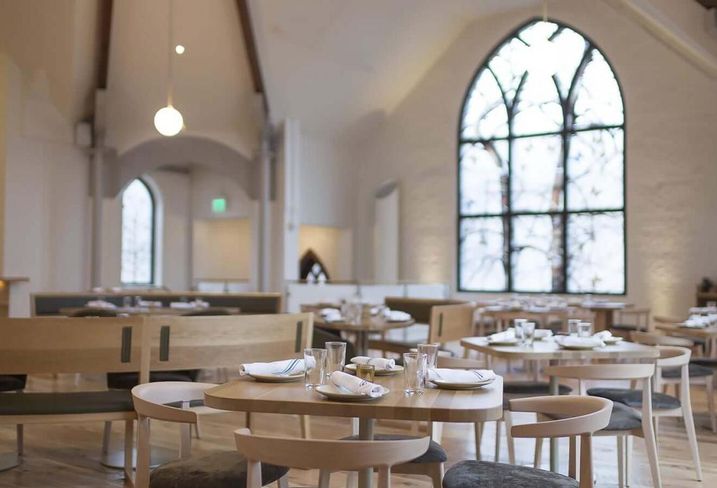 Courtesy of Mark Jackson
The Preacher’s Son in Bentonville, Ark.

The concept of The Preacher’s Son was developed partially around the chef’s personal story as the son of a Methodist preacher in the location of the former First Christian Church in downtown Bentonville, FÖDA Studio Creative Director Jett Butler said.

“From chair selections to check presenters, apron design to cocktail names, we designed each piece to work as a whole where no one thing dominates."

The finishing touch was the addition of 288 5-inch gold bells in the tower, Butler said. 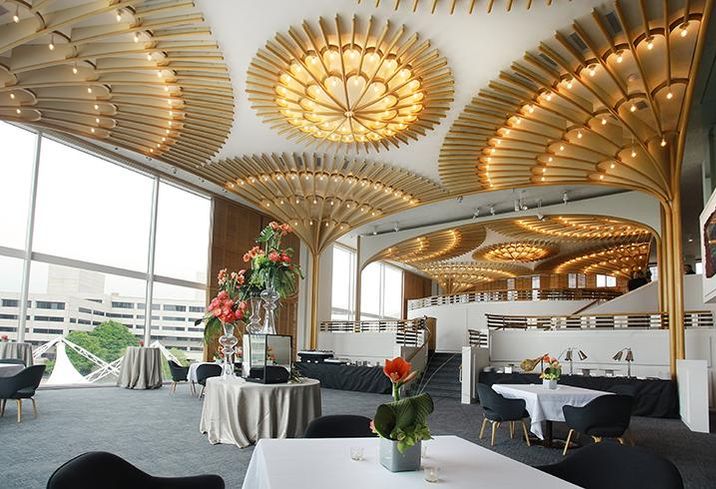 To be named a Design Icon, a restaurant’s design must have remained substantially unchanged for at least 20 years, must be influential to future restaurant designs and must be in operation. The James Beard team named The American Restaurant in Kansas City, Missouri, as its Design Icon of 2018.

The American Restaurant opened on Valentine’s Day in 1974 at the top of Crown Center in Kansas City. It was designed by Warren Platner, who described it as “bridging the contrast in scale between great volume of space and the minute detail of food and tableware, between public gathering and personal intimacy, the design entertains the diner and gives distinction to the server in this emporium of elaborate meals.”

The restaurant features terraced landings with views to the city below. Bentwood rosette-topped pillars were designed for a “dining under the trees” feel. Wood louvers create a look of tree-filtered light. Through decades of design improvement, the largest design elements, including the decorative wood elements, remain intact.

“The American has remained a landmark of culinary excellence and timeless architecture in Kansas City since 1974,” Crown Center Vice President of Facilities and Real Estate Nathan Guffey said. “As the third-ever recipient of the Design Icon Award, we are proud to see Warren Platner’s iconic design receive this notable recognition by the James Beard Foundation.”

CORRECTION, May 2, 11:13 A.M. ET: A previous version of this story published an incorrect job title for Amy Ilias. She is the Executive Vice President, Art & Design. The story has been updated.