Foot Locker is rolling out larger, more experiential stores in collaboration with sports apparel giant Nike. The locations, known as Foot Locker Power Stores, will be roughly 9K SF, about four times as large as typical Foot Locker stores, and will include proprietary technology developed by Nike. 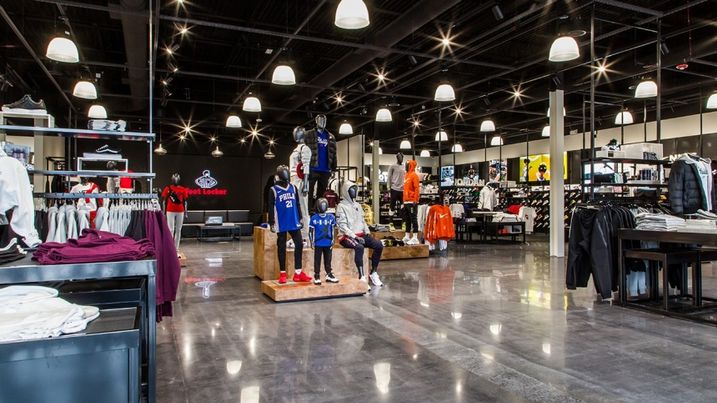 The footwear retailer is betting big on the new concept in the face of an ailing retail market — it plans to open as many as 50 such locations nationwide over the next two years. The latest location is opening on Aug. 10 in the Washington Heights neighborhood of Manhattan.

With the rollout, the company aims to reinvent its shoe stores to bring people in, despite competition from Amazon and other physical stores, CNBC reports.

Nike tech is making the stores more interactive and experiential, which is expected to make them more appealing to customers. For instance, signs next to Nike products in the store tell customers to download the NikePlus app to "scan and learn," Engadget reports. That will let customers view available sizes and colors at the Foot Locker store they are in, rather than waiting for a clerk.

Customers will also be able to use the Nike app to reserve items directly from the company and pick them up at the Foot Locker. Nike loyalty members can scan a bar code at the new Foot Locker concepts to get free goodies like sunglasses, or buy exclusive products, or perhaps win a free pair of sneakers.

Interactive retail technologies aren't new for Nike, which has been developing them in its own stores. For instance, Nike has created an artificial intelligence-based system in which customers can design their own shoes and receive them in time to leave the store wearing them. The Foot Locker Power Stores are the first time Nike has installed any of its technologies in another retailer.

This isn't the shoe chain's first stab at more experiential retail, either. In 2016, Foot Locker opened its Midtown Manhattan flagship with a variety of new features, including in-store social media feeds, huge digital signs showcasing its shoes and an adjacent space reserved for fashion shows.

So far this year, Foot Locker has opened four U.S. Power locations, the one in New York, one in Detroit and two in Philadelphia, and it has international locations in London, Liverpool and Hong Kong. The company hasn't said yet where any of the future U.S. locations will be.