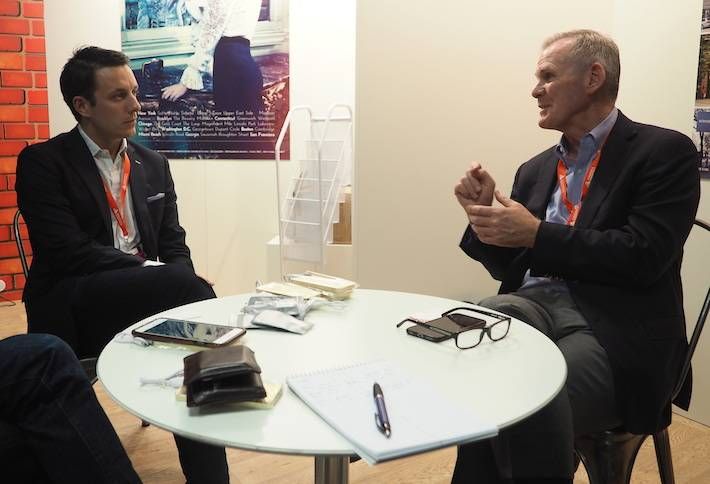 Acadia Realty Trust COO Chris Conlon is spending a tremendous amount of his time these days overseeing the development of City Point in downtown Brooklyn, he told Bisnow, including CEO Will Friend on the left, at MAPIC in Cannes this week.

City Point is a 1.9M SF mixed-use development that, when complete, will include more than 700k SF of retail and three residential towers with 1,300 residential units. It’s far bigger and more complex than anything the retail REIT has ever done before.

Initially, the lower level of the project was intended to be an anchor department store. But as the design process moved along and Acadia did more market research, the plan changed. Now, a 20k SF Trader Joe’s will be placed there along with a 35k SF food hall, which will have 50 different food vendors, led by Katz’s Deli.

Chris’ favorite spot to eat in Brooklyn is Ganso, a ramen shop on Bond Street. “It’s a perfect example of what Downtown Brooklyn—no pun intended—is starving for,” Chris says. “Really good food execution.” When City Point opens next year with that food hall (called Dekalb Market) below five stories of retail (including a Target, a two-story Century21 department store and an Alamo Drafthouse movie theater), that will change.

Although much of Chris’ attention these days is on Downtown Brooklyn, he’s not sitting on his hands elsewhere. In DC, Acadia bought Mr. Smith’s Piano Bar in Georgetown, gutted and added to it and are marketing it as luxury retail space (rendered above). They own property on Connecticut Avenue near Dupont Circle and are circling NoMa as a potential opportunity for retail in the future.

Acadia is also making three acquisitions in San Francisco, although Chris can't say where just yet. Those follow the public company’s first play on the West Coast, a $160M power center, City Center at Geary and Mesonic. It’s a signal that Acadia is at an inflection point. But it’s not ready to launch into tertiary urban markets just yet. “Retailers are pushing us for Nashville,” he says, but he doesn’t anticipate a move near the Grand Ole Opry in the close future.

He’s more likely to look to City Point’s north, at Astoria and Long Island City, two buzzy Queens neighborhoods that are lacking in retail options, comparatively, to Brooklyn and Manhattan.