Prepping For Hurricane Florence: 'This Will Be A Devastating Storm'

As North Carolina, South Carolina and Virginia hunker down in preparation for Hurricane Florence, not everyone joined the flow of traffic away from the coast. 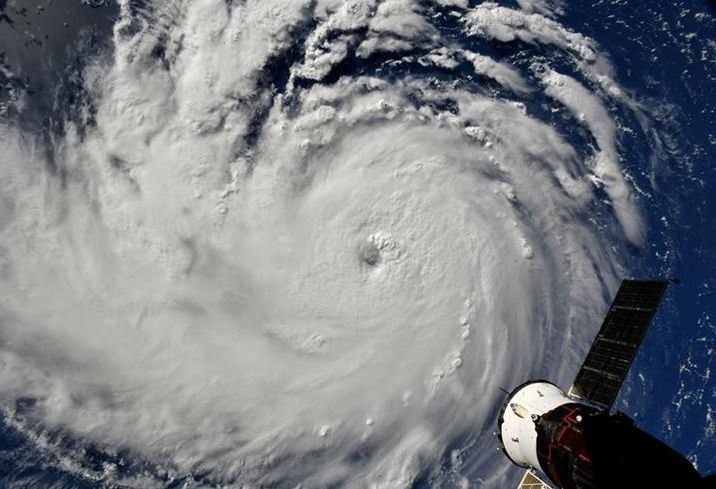 Property managers and business owners scrambled this week to ensure their investments were protected as the storm barreled its way toward the East Coast. As of Tuesday, the hurricane was tracking straight for North Carolina.

“This could be the strongest storm to strike the state on record. Then the rainfall could rival Floyd and Matthew levels,” local NBC affiliate WCNC’s chief meteorologist, Brad Panovich, told Bisnow.

Property owners should prepare for all three phases of the storm — before, during and after, Panovich said. A broken window or damaged roof before the storm then becomes a water entry point that could lead to major water damage. After the storm, he said a property manager’s focus should be on cleanup and getting through long periods of time without power or internet service.

“This will be a devastating storm for the Carolinas,” he told viewers Tuesday. “If you live near the water, you need to get out.”

But not everyone is leaving. Bisnow spoke to a bar owner who is staying at Carolina Beach. So was a property manager at Emerald Isle. A first responder’s wife waited for word in Morehead City about whether she could take her four children and chihuahua away from the storm’s path — or not. 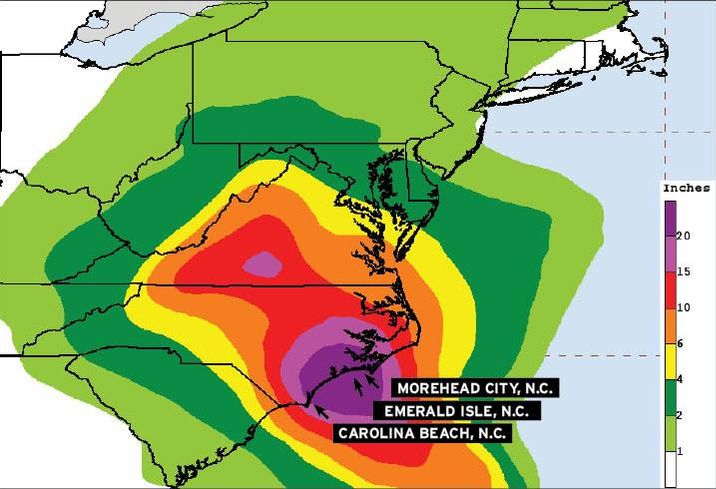 More than 1 million people in the Carolinas and Virginia have been given evacuation orders.

“The waves and the wind this storm may bring is nothing like you’ve ever seen. Even if you’ve ridden out storms before, this one is different,” North Carolina Gov. Roy Cooper said at a press conference Tuesday afternoon. “Don’t bet your life on riding out a monster.”

Rain in some areas will measure in feet, not inches, Cooper said.

“Wherever you are in North Carolina, get ready now. Preparation is our best defense.”

Properties at risk of storm surge

A CoreLogic analysis shows 759,000 homes in the Carolinas and Virginia are at risk of storm surge as a result of Florence. Homes and commercial properties face significant property damage when 100 mph or stronger winds combine with low pressure to release torrents of water over land when a hurricane reaches shore.

“It is important to pay attention to not only the broader impact of the storm, but more specifically the eye of the storm, which will provide insight into where the harder hit areas are likely to be in terms of storm surge flooding,” he said.

The storm is showing potential that it may slow prior to landfall, which means a greater risk for flooding of inland properties, Jeffery said.

“Similar to Hurricane Sandy in 2012, a storm that hovers offshore or moves slowly just prior to landfall can increase the amount of surge water over land.”

Ensuring a safe exit for guests 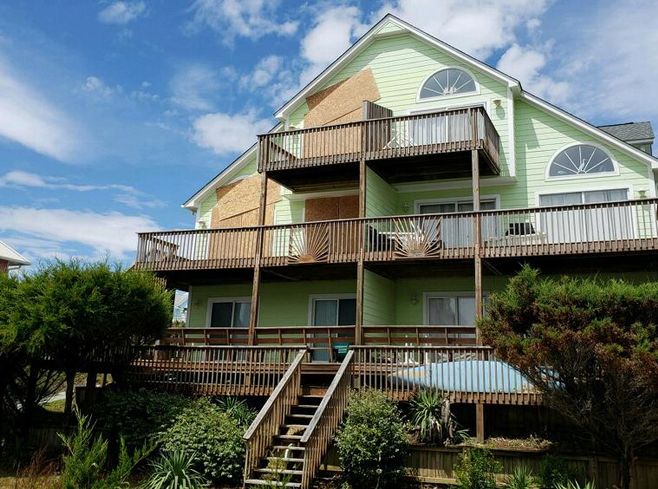 Courtesy of Susan Brubaker
Half of a duplex is boarded up at Emerald Isle, N.C., in anticipation of Hurricane Florence on Sept. 11, 2018.

Boutique management company Spinnaker’s Reach in Emerald Isle, a small barrier island south of North Carolina’s Outer Banks, started preparing for Florence last weekend, with insurance forms and a warning to guests at check-in that their vacations may end up shorter than planned.

Rental manager and broker Mindy Montague said guests began exiting Monday evening, with the last ones departing mid-afternoon Tuesday. The company manages about 70 properties, and once the guests were gone, the real work began.

All furniture was carried inside, grills, outdoor trash cans and outdoor showers were secured, water and power was turned off and storm shutters were installed. Montague lives just across the bridge, where she will stay to weather the storm.

“If we leave, then we can’t get back,” she said. Her husband, her daughter and five grandchildren plan to stay in the house as well.

“We’ve been so involved in trying to get guests ready to leave we haven’t really had a lot of time to prepare our own homes for the hurricane,” she said.

Luckily, she said, her husband had done a lot of the preparation, and the family already had a generator, canned goods and water. They plan to move their cars to a parking lot on higher ground.

“Right now ... prior to the hurricane, we are having sunny skies and that’s part of what causes people not to feel the urgency in leaving,” Montague said.

Also in Emerald Isle, Susan Brubaker took photos of the peaceful beach on her way to Virginia with her husband and their dog, a lab mix named Sumio.

“Before North Carolina, I thought calm before the storm was figurative,” she said. 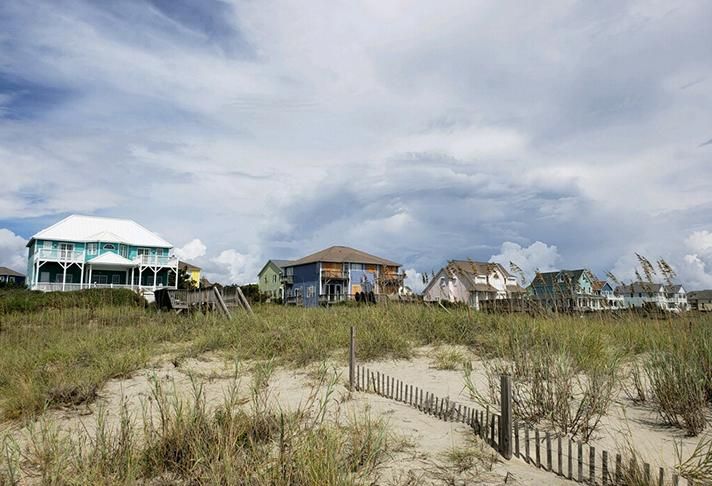 Courtesy of Susan Brubaker
At Emerald Isle, some houses were boarded up while others were not.

Her short-term rental community was a mixed bag of preparation, she said, with houses ranging from storm shutters to boarded-up windows to nothing. Their vacation home, which they named Forget Me Not, once served as their primary residence.

“On one hand, it’s just a house. Whatever happens, we’ll deal with it,” she said. “But I’m also worried about friends who can’t leave and the beautiful island that’s become such a part of my life.”

In Morehead City, inland from the vacation homes on Emerald Isle, Grace Hunter devised two plans. If her husband, an EMT first responder, was released from work, she packed bags for them, her four children and her 8-pound chihuahua, Fluffy. If her husband is not able to leave, the family, along with Hunter’s mother, will ride out the storm in their first-floor apartment with four bedrooms and one bathroom.

She won't know her family’s fate until Wednesday.

“It’s just eerie. It’s eerily quiet. The birds have already left. There’s no seagulls, there’s no herons. Everything is boarded up,” Hunter said. “I think everyone is scared. It’s an unsettling feeling in an area that’s just used to [storms].”

Hunter experienced Hurricane Floyd in 1999 in Newport, the next town over.

“They keep comparing this storm to Hazel and Hugo and Floyd, and those all did catastrophic damage,” Hunter said. “This one could be worse.”

She prepared her place by cleaning linens, moving items to higher ground, safeguarding food in the freezer and searching for food and water.

“Trying to find water is like trying to find the Holy Grail,” she said. Hunter hoped a 3 a.m. Walmart trip on Tuesday would lead to freshly stocked shelves. “There was still nothing, and they weren’t sure if they were going to get a truck in. Come to find out, they never did because they’re closing at 8 o’clock tonight. Walmart closes once a year and now they’re closing until further notice.”

Everything from outside had been picked up except for two chairs facing Calico Creek, where she and her husband sit in front of the water at the end of the day. Hunter said she hoped they would enjoy one last sunset evening before the storm, but even that was up in the air — he was moving nursing home residents on Tuesday evening.

“I don’t know when he’s going to be home,” Hunter said. “There’s no telling.”

Bar owner stands to lose everything — including his houseboat 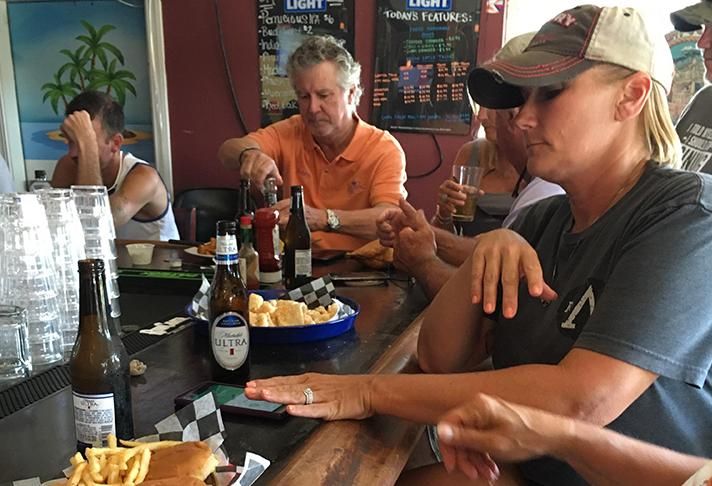 Courtesy of Jerry Hebert
Customers at Buzz’s Roost at the Beach at Carolina Beach, N.C., on Tuesday afternoon.

Jerry Hebert owns a restaurant in Carolina Beach, near Wilmington and a few miles north of the border between North and South Carolina. He spent Tuesday afternoon cooking at Buzz’s Roost at the Beach, which he said is the only open restaurant. Hebert owns two bars and a houseboat.

“I’m 99.9% sure I will lose both restaurants as I literally am at sea level, oceanfront,” he said. “My boat, which I live on, will most likely sink — so I stand to lose everything.”

Hebert planned to stay Tuesday night on his boat and then migrate to a friend’s home about a mile away.

“We will probably lose power for up to 10 days, maybe more,” he said. “We have a generator so that should last a week or so then we go dark. No power, water or food.”

Hebert said his main goal was to get his employees paid on Tuesday and over the bridge to safety. One of the restaurant’s servers lives in a tent with her children, and he was trying to find a safe place for her to stay.

With the unknown looming, the bar's party continued into the evening.

“We are open so we can all see our friends before we all go our separate ways. They are calling for complete destruction of the boardwalk and homes on the inlet, so we are all here saying goodbye,” Hebert said. “It's sad, yet everyone is loud and having fun.” 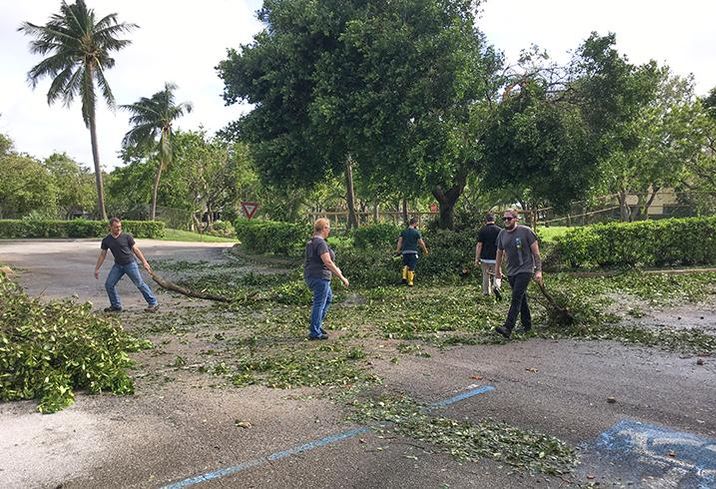 Charlotte-based Flexential has six data centers that could potentially be in Florence’s path, and its “Go Team” has been activated. About three dozen mobile response volunteers are on standby to fly into the areas at a moment’s notice to provide staff augmentation so their employees can take care of their homes and families first.

Flexential Vice President of Governance, Risk and Compliance David Kidd said the company is well-prepared for storms like these as the company has data centers in Florida, where they are at risk of hurricanes every year.

“Over the last two decades, we’ve had a lot of practice,” he said.

Kidd’s team is making sure supplies are on hand with plans to bring in more, making sure emergency systems are ready to activate, and making sure there are no loose debris or limbs around the properties that could cause future damage.

“First thing is, try to be prepared — go for the Boy Scout motto,” Kidd said. “There is still time.”