Uber, Hyundai Team Up On Flying Cars. Will Landing Portals Be Standard For Office Buildings By 2040?

Uber and Hyundai Motor Co. have inked a deal to develop Uber Air Taxis as the basis of an aerial ride-share network in the future, unveiling a full-scale aircraft concept at the Consumer Electronics Show in Las Vegas. 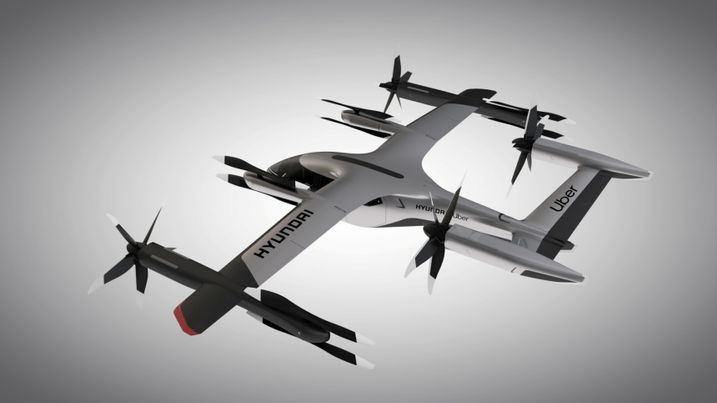 The idea of flying cars has been kicking around almost as long as there have been aircraft and cars, but only in recent years have plans for them seemed feasible enough to consider a possible impact on commercial real estate.

Last year, Morgan Stanley Research posited in a report that there will be a $1.5 trillion market for autonomous aircraft by 2040, mostly for passenger service but also for freight and package delivery.

Widespread use of flying ride-share vehicles has the potential to spark significant design changes for commercial building rooftops.

“In the past, the highest value space has typically been on the ground floor, but with rooftops converting to interface with aerial ride-sharing, it allows buildings to infill with more valuable real estate and amenities for the community,” Gensler Senior Designer Scott Gorenc told Bisnow.

The prototype unveiled by Hyundai and Uber is a VTOL (vertical take-off and landing vehicle) designed for a cruising speed up to 180 mph at an altitude of 1,000 feet to 2,000 feet, and to fly as far as 60 miles. It will be a fully electric-powered vehicle.

At first, the Hyundai-Uber vehicle will be controlled by a human pilot, but plans call for them to eventually become autonomous. Its cabin will seat four passengers, with enough space for a personal bag or backpack, but no middle seats.

Hyundai is the first automotive company to join Uber Elevate, the ride-share company's air initiative. The goal is to bring the automaker's manufacturing capability up to the task of mass producing flying cars.

Both companies are also collaborating on infrastructure concepts to support the vehicles, presumably including interfaces with commercial and residential properties, though the partners haven't released any details along those lines yet.