Will Demand For Less Density Offset The WFH Office Exodus?

As companies hone their office re-entry plans, some landlords are betting that companies requiring more space will offset the ones pivoting to remote work.

That could help buoy the sector in a post-pandemic recovery, as office footprints expand, some said this week. 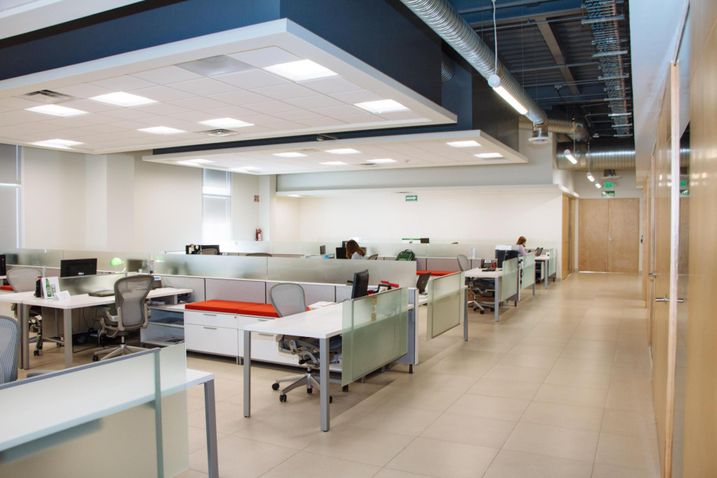 Decreased workplace density would reverse a trend that was rock solid throughout much of the past decade. Facing rising rents, employers often opted for less space per employee; between 2018 and last year alone, average rentable SF per employee in North America fell 14.3%, from 228.2 to 195.6, according to JLL.

Now, with social distancing paramount for the foreseeable future, many in commercial real estate think companies will be more quick to "de-densify" than abandon the office altogether.

“We haven’t had any inquiries from people wanting to downsize immediately, so we don’t really see that happening," Monday Properties Managing Partner Timothy Helmig told Bisnow. "With the densification momentum stunted for the moment, there’s actually some appetite for additional space.”

“Ultimately, if more people work from home, then that would logically tell you that you could potentially need less office space, but that’s not a certainty either if density within the office decreases," CBRE Executive Director Colin Yasukochi said.

If, as the office sector largely argues, companies' loyalty to the property type remains strong, an appetite for additional space might indeed be its corollary.

Studies before the coronavirus pandemic have linked open-floor office plans, which enable less space per employee, to more paid sick leave. Separates studies in Denmark and Sweden have shown workers' proximity to one another in the open-floor layout might cause more germ transmission, though neither proves causation.

In response to the times, layout solutions like Cushman & Wakefield's 6 Feet Office concept are already coming about.

Aside from landlords, some on the tenant side have also mulled how decreased densities might boost the office sector. Former Google CEO Eric Schmidt, for instance, has said he thinks the pandemic will result in more office demand, once the outbreak fully subsides.

"My guess is we'll have more demand for office space, not less, because people will want social distancing," Schmidt said on Face the Nation.

MetLife analysts concluded this month that pandemic-compliant office space could offset headwinds the sector faces in the long term, once companies realize productivity lags with remote work. Expecting a "continuous stream of companies announcing plans to downsize their real estate space,” they wrote in notes that they "expect many firms to try (and fail) with permanent work from home arrangements in the near term."

Just as likely is a move to the suburbs, according to Buchalter attorney Manny Fishman, an expert in real estate and commercial lease law. Decisions by companies like Facebook to shift to some permanent remote work may mean they need less of their current office space, but perhaps more outside of central business districts and with larger workstations.

Buchalter itself is looking for satellite offices for its employees in the Bay Area, Fishman told Bisnow.

Others are less sure about how everything shakes out, thinking it is simply too early to tell which factors between remote work and lowered densities win out.

“I actually don’t think anyone has the answer," Colliers International Vice President of Workplace Advisory Michelle Cleverdon said. "Purpose of place and the power of place really might start to evolve toward face-to-face interaction, and when we get to talking about density, it remains to be seen."