Beyond The Bio: 16 Questions With Form4 Co-Founder And Chief Artistic Officer John Marx

The results include award-winning office projects such as the 4M SF EON IT Park in India, made in the shape of the country’s national flower, and the Innovation Curve in Palo Alto's Stanford Research Park. Marx, who is one of Form4's four principals, thinks Silicon Valley historically valued pragmatism over artistic expression in its building design until the last five years or so. 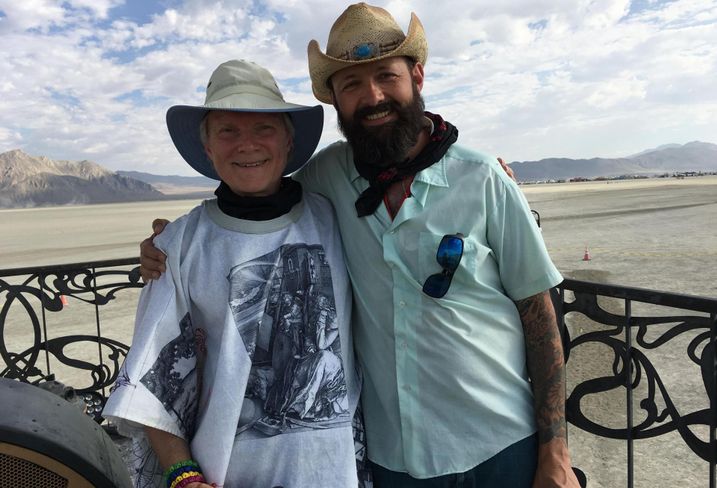 “We enjoy being able to do the best job for [pragmatic] clients and at the same time do some really cutting-edge and provocative work. And we can do this within the same firm,” Marx said.

In each of his projects, Marx tries to introduce cultural vibrancy, which he defines as a measure of how deeply, inclusively and interactively a project taps into the culture of a place.

Marx and Form4 are behind cutting-edge projects like the Silicon Valley headquarters for Netflix and Nvidia, but the firm’s portfolio also consists of more traditional projects, like the Santa Clara University Arts and Art History building.

Loosely describing his role as “a sort of philosopher, poet, designer” for the firm, Marx is an avid poet and painter and recently released a book of his work. He says these passions, as well as his annual trips to Burning Man, influence and inspire some of his designs.

Now, Marx is focused on two big-picture projects: seeing the completion of the final two of the four Innovation Curve buildings, and talking with developers about a creative community of 1M to 7M SF centered on participatory art. He sees Oakland or Santa Clara, California, as prime candidates for such a community but said the European Union is where most of the interest has been. 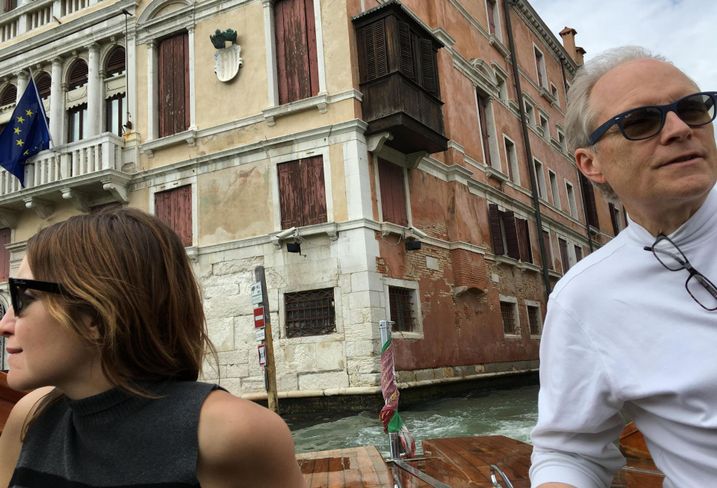 Courtesy of Form4 Architecture
John Marx with his daughter, Andrea, in Venice, where he has exhibited work at the Venice Architecture Biennale

Marx: I inspire people to build buildings that are outside of their comfort levels. I like to think that as an architect, I help my clients strive closer to the projects of their dreams. I co-founded Form4 Architecture to bring beauty and poetry to our daily interactions with the built environment. I currently serve as chief artistic officer, and endeavor to create buildings that evoke emotion, rather than simply existing as places that people occupy. Having lived and worked in San Francisco for more than three decades, I also manifest work that is respectful of its surroundings, an art and courtesy that I feel is fleeting in our city.

Marx: I am a passionate sketch artist, poet and watercolor painter. I recently released a compilation of my watercolors and poetry in a 160-page book titled Études: the poetry of dreams + other fragments (OroPress, 2019). When I’m not designing workspaces for the likes of Netflix, Google and VMware, I enjoy diving headfirst into my creations. My painting and artistic pursuits outside of architecture largely inform and have an influence on my designs. If I weren’t making a living as an architect, I would pursue painting and poetry full time.

Marx: The worst job I’ve ever had was one of my firsts: cleaning dorm rooms during the height of the summer while on break from college. I was tasked with cleaning the grout lines in the shower with bleach and a toothbrush. It was in a building where the air conditioner was turned off to conserve energy as the students had departed for summer break. That lasted approximately two weeks.

Marx: My first large architecture project was designing the original 500K SF Sobrato-developed headquarters for Nvidia. It was an exciting early time for our firm, and led to work with other Silicon Valley tech giants.

Marx: We’ve entered a few large projects into design competitions that may not have come to life. In spite of the fact that we didn’t always win the competition, we used the practice as a way to explore concepts such as intense cultural vibrancy and pedestrian-oriented urban developments.

Marx: There is a lack of cultural vibrancy, placemaking and creative communities in the Bay Area. There’s an enormous opportunity to create more grand mixed-use projects that is often avoided because of unnecessary risk aversion in the industry. As a firm, we strive toward a heightened public awareness of cultural vibrancy’s value.

Marx: Minimalism and orthogonal architecture. I believe in work that is artful and dynamic, that draws inspiration from the natural environment. My firm and I tend to eschew straight lines in favor of lyrical expressionism and curvilinear forms. Architects have a responsibility to incite the emotion and provocation of innovative ideas through their work. As an architecture firm, we want to design buildings that people will love again.

Marx: Charles Warren Callister, who I worked for in the '90s at a firm that was then named Callister, Gately, Heckmann, Bischoff. Callister integrated poetry into his architecture, and largely focused on high-end residential and large community developments. I greatly admired his commitment to recognizing architects as artists, and architecture as an art form.

Marx: Best: “You are responsible for your own achievements.” Worst: “Don’t take risks.” 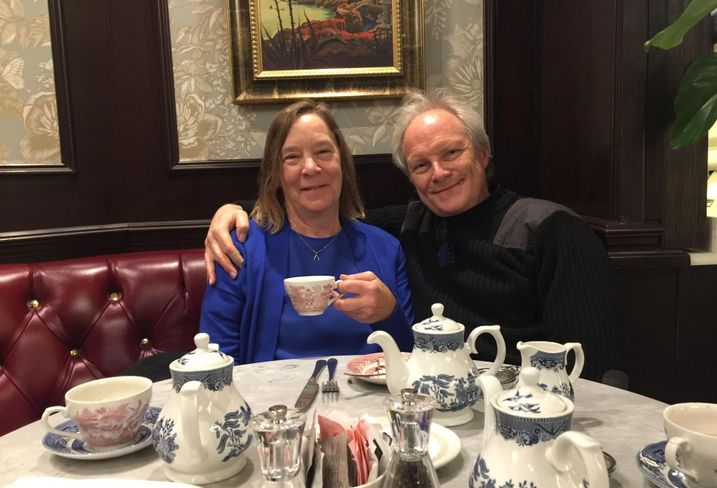 Courtesy of Form4 Architecture
Marx and his wife, artist Nikki Beach, in London

Marx: The investment that one makes when renovating their home is much more than a financial spend. It takes an emotional, as much as fiscal, toll. My greatest extravagance would have to be the time and dedication spent in renovating my three-floor Russian Hill townhome. Our work on the project was also an extravagance of space, having increased our home’s square footage to 3,300 from 1,900. It was a passionate labor of love, and was a challenging, yet incredibly rewarding, experience.

Marx: Da Flora in San Francisco’s North Beach. I love it enough that I wrote a poem for the restaurant that they put on their website.

Marx: The biggest risk I’ve ever taken was the purchase of a 20-unit apartment building in Santa Monica. If any readers are fans of numerology, I purchased the complex on Aug. 8, 2008 (08/08/08). The stock market crashed on Sept. 29, 2008, so the transaction turned out to be one of the biggest risks I’ve taken that resulted in the biggest payoff. The risk felt higher once the market crashed, but over the last 10 years the investment increased in value 400%.

Marx: Although I’ve spent more than three decades here in San Francisco, I am originally from Macomb, Illinois. My favorite place to visit in my hometown is Argyle Lake State Park. It boasts picturesque views of the waterfront, and is a naturalist’s dream.

Marx: Nothing now, except garlic. When I was younger, my mind would race with creativity in the evenings, and I found it incredibly difficult to turn off the switch.

Marx: I am most passionate about the integration of art, poetry, philosophy and performance into our daily lives, and bringing emotional meaning and cultural vibrancy to Silicon Valley. Last year, I was honored as a “visionary cultural stakeholder” with the inaugural Sam Shepard Legacy Award by The Magic Theatre, a San Francisco-based entity dedicated to creative risk. I’ve also been chair of The Magic Theatre’s board three out of the 10 years that I’ve served. Each day, my intention is to incorporate this dedication to emotional meaning and cultural vibrancy into my work as an architect.

Bisnow: Any interesting information that people may not know about you?

Marx: I have attended Burning Man four years in a row, and plan to attend again this year for the fifth. The event has become a family affair, and I bring my wife and daughter along in tow to celebrate this transformative experience. For this year’s event, I was part of a small group of artists invited to submit designs for the Burning Man base, for which I proposed a globed and winged pavilion named “The Golden Cage,” filled with spaces for interactivity and performances. Each year, I return from the event with a cache of inspiring ideas to implement and integrate into my architecture. I’ll also be leading a workshop focused on the topic of Burning Man and creative communities at The Esalen Institute in October.