Amazon didn't pick Nashville for its second headquarters last year, but it did agree in November to locate at least 5,000 jobs in the office component of the Nashville Yards development in Downtown Nashville. 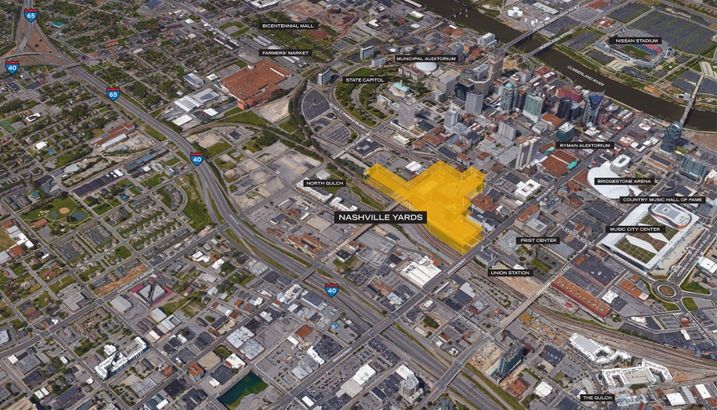 Now the retail giant has formally signed a lease for about 500K SF in one of the office towers rising on the Downtown site, with an option to take more space.

The Nashville Yards project is a mixed-use development by San Diego-based Southwest Value Partners that will ultimately include 3.5M SF of creative and Class-A office space, 1,000 residential units, 400K SF of retail and entertainment, and 1,100 hotel rooms.

The Amazon facility will be known as the company's “Operations Center of Excellence” and will include such functions as customer fulfillment, transportation and supply chain management for the retailer. It is expected to open in 2021.

“This is the largest jobs announcement in the history of the state of Tennessee,” Tennessee Gov. Bill Haslam said at a press conference in November when Amazon announced its plans.

The company is making an estimated $623M capital investment over seven years to create the new jobs, which have an average pay of $76.32/hour, or more than $150K/year, News Channel 5 Nashville reports.

The move by Amazon came with a package of incentives. The retailer will receive performance-based direct incentives of nearly $102M — a cash grant from the city of $65M, as well as $15M over the next seven years from the state and a state job tax credit of $21.7M.

That arrangement has its critics.

"When you win a consolation prize, you’re usually not asked to pay $100M for the trophy," John Mozena wrote in the Tennessean. "But that’s what happened to Tennessee’s taxpayers when state and local politicians struck their surprise secret deal with Amazon to subsidize its Nashville operations facility."