Work has started on a new 16-acre neighborhood in Tempe, Arizona, that will include multifamily residential space, retail and common areas — but no space for residents' cars. 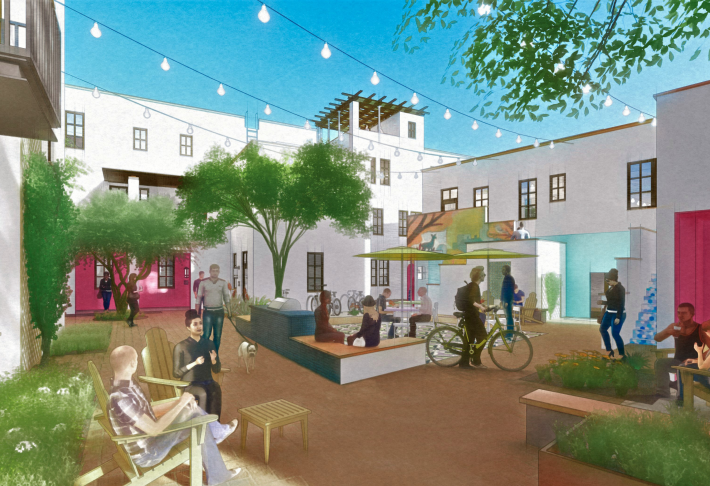 According to San Francisco-based developer Culdesac, the property's 1,000 residents, who will occupy 636 multifamily units, will not have private cars or parking spots. The neighborhood will accommodate parking for visitors, as well as designed spots for car-based modes of transportation, such as ridesharing, for when residents need to travel elsewhere.

“The communities we are living in were optimized for the peak car era,” Culdesac CEO Ryan Johnson said in a statement. “Culdesac is building spaces for the post-car era."

Culdesac asserts that the development, Culdesac Tempe, is the first U.S. neighborhood purposely built from scratch to exclude private automobiles. The idea of car-free zones in existing urban areas is nothing new, however, especially in Europe, where a number of city centers are car-free for some or all of the time.

Culdesac Tempe will be about 55% open space, and include a food hall, coffee shop, communal fire pits and a communal building that residents can reserve.

The development will be connected to other modes of transportation, including the metro Phoenix light rail system and buses. Bicycles and scooters will be available for shorter trips.

During the development's entitlement phase, the developer persuaded the city of Tempe to forego standard parking requirements. Culdesac stresses that a neighborhood without cars — and especially without parking spaces — will have more room for walkways, retail, courtyards and other open space, which ideally will encourage residents to walk and socialize.

The Phoenix area, which isn't one of the top walkable cities in the country, might seem an unlikely place for a car-less project, but as a college town, Tempe has a median age of less than 30 years old, and younger people are less interested in driving than previously, the Wall Street Journal reports.

Culdesac is planning other similar neighborhoods in other parts of the country, including metro Dallas-Fort Worth, Denver and Raleigh-Durham, North Carolina. Johnson said the company is looking for larger sites for future car-less developments, including sites as big as 100 acres.

Culdesac Tempe, which was designed by Berkeley, California-based Opticos, is slated for completion in 2020.