Flooding Is Turning Elevators Into Lethal Traps With Little Oversight

As Hurricane Harvey bore down on Texas in 2017, Jill Renick spent her last moments alive at the Omni Houston Hotel, where she worked as the spa director.

At 5:40 a.m. Central time on Aug. 27, 2017, Renick called the front desk, telling colleagues she was stuck in the elevator in the basement, with water rushing in. A surveillance video showed she freed herself from the elevator, but by that point waters in the basement were waist deep. Shortly after, the power went out. Flood waters continued to rise. Her body was found 11 days later in the ceiling tiles. 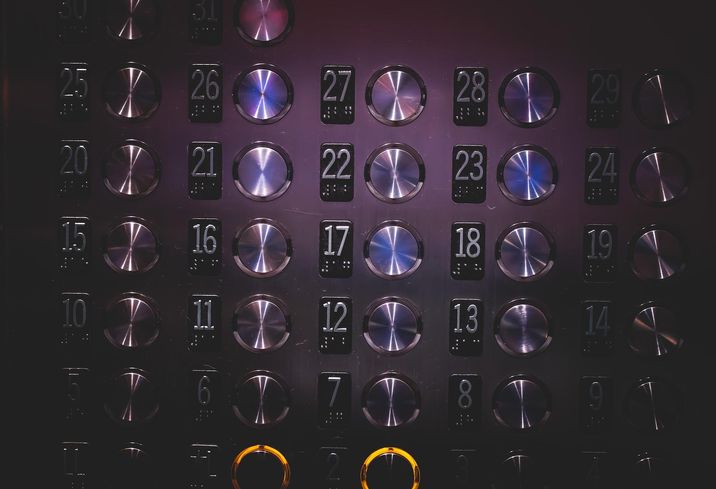 Renick's family is suing the Omni, which didn't have a flood sensor — required by the city — that may have prevented the elevator from descending into water.

Elevator guidelines that require features like flood sensors aren't always mandated or enforced. What seems like an easy solution to drowning deaths — requiring a sensor that detects flooding — is trickier to mandate than it seems, and though new elevator guidelines are being written on a national level, they won’t necessarily create much change. 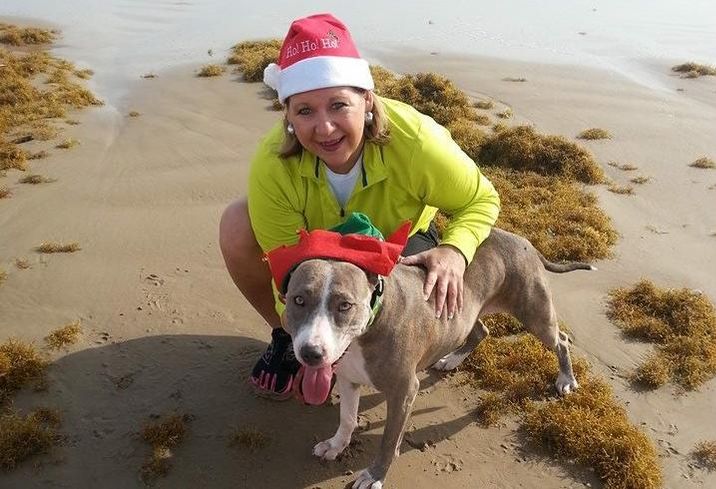 “We’ve certainly seen over the last several years that some of the hurricanes and flooding associated with them have been greater than it was in the past,” Brinkman said.

As sea level rise increases lead to more flooding concerns in coastal areas, the Emergency Operations Committee of the American Society of Mechanical Engineers, of which Brinkman is a member, is developing new guidelines that will state precisely how building operators should address flooding issues in elevators.

“It’s certainly on our radar and something we’re trying [to] be more proactive in to prevent in the future,” Brinkman said.

It will be up to each state to adopt the guidelines as requirements.

From 1992 to 2009, 352 people were killed by elevators in the United States, according to a 2013 report by The Center for Construction Research and Training. Of those, 263 were construction personnel working in or near elevator shafts. The report analyzed data by the U.S. Bureau of Labor Statistics and the Consumer Product Safety Commission.

Although they do happen, elevator deaths among the general population are rare, and death by drowning in an elevator is even more rare, KJA Consultants Inc. Chief Operating Officer Rob Isabelle said. KJA is an engineering elevator consulting firm.

To examine the safety of elevators, one only has to look at the sheer number of trips taken in elevators relative to the number of incidents, Isabelle said. Americans take 18 billion trips per year on elevators, according to the National Elevator Industry Inc.

The majority of elevator-related fatalities are workers who are performing maintenance or repairs on the elevators, Isabelle said.

“The risk of the general public being killed in an elevator is very, very low.” 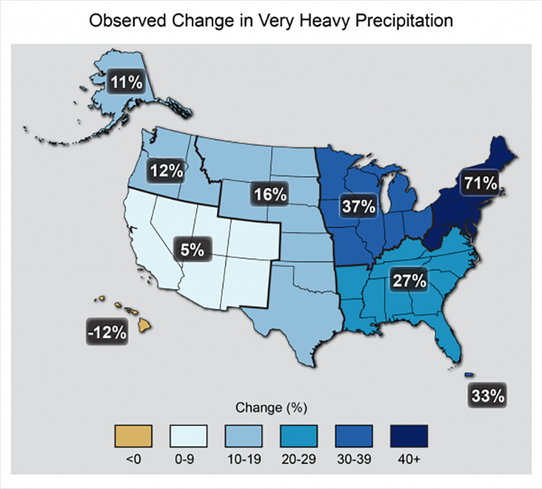 Yet, flooding in elevators has been happening increasingly often, at times with people inside of them.

“In Canada and the U.S., we’ve had a couple of these 50-year storms, which have resulted in extremely large amounts of rainwater falling in a short amount of time. We’ve had situations where a parking garage did get flooded,” Isabelle said.

Floods are the most common and costly natural disaster in the country, according to the Federal Emergency Management Agency. Annual precipitation over the U.S. has increased roughly 5% since 1900, according to a 2014 National Climate Assessment. The heaviest rainfalls are even heavier — since 1991, the amount of rain falling during significant rain events has been significantly higher, ranging from 5% to 71% higher across the continental U.S.

The intensity, duration and frequency of hurricanes has increased since the early 1980s, the assessment stated. Rainfall and hurricane intensity are projected to continue increasing as part of climate change. Higher temperatures are contributing to more wildfires, which can lead to increased flooding after mudslides and rain.

With wildfires, hurricanes and more intense rainfall on the rise, instances of people trapped in flooded areas have been materializing.

There is no organization that specifically tracks flooding in elevators. The Bureau of Labor Statistics Injuries, Illnesses, and Fatalities program tracks occupational injuries, illnesses and fatalities that occur in elevators, but only when someone is working.

The Consumer Product Safety Commission told Bisnow commercial elevators do not fall under its jurisdiction, and it had no reports of incidents regarding flooding in elevators (residential or otherwise) from 1981-2018. But we know these incidences are happening.

Two years before Renick’s death, at the same Omni in Houston, another employee was stuck in an elevator during a rainstorm. By the time he was rescued, the water was waist-high. The employee said the power went out and the elevator took him to the basement level of the hotel, even though that wasn’t where he intended to go.

In 2002 during Tropical Storm Allison, a law firm proofreader drowned in a Bank of America parking garage elevator in Downtown Houston.

In August 2018, two colleagues were stuck in an elevator in an office building in Toronto during a rainstorm, and when water began rising, they frantically called for help. They were rescued with just a few inches of air left.

There are products that can help to alleviate flooding and associated damages in elevators.

C.J. Anderson & Co., an Illinois-based company that develops and manufactures switches, interlocks and control systems for the elevator industry, states on its website that pit float switches have been specified on more elevators nationwide since someone died in an elevator during Tropical Storm Allison. When a pit float switch, installed 1 to 2 inches from the floor, is activated by rising water, the elevator is set to run to the top floor and open the doors. Car floor buttons are then disabled.

One of the men trapped in the Toronto parking garage elevator, Klever Freire, told The Star he wondered why a water sensor wasn’t installed in elevators to prompt an automatic emergency call.

Afterward, about 150 elevators in downtown Toronto were shut down. Isabelle said some of KJA’s clients then inquired about flood sensors. Houston has updated its codes to require water sensors.

Thyssenkrupp Elevators has a safety checklist specifically for elevators during storm season. Its suggestions are designed to help ensure the safety of both tenants and equipment. One tip includes “install a float switch to stop elevators from running to the bottom landing if the pit floods.”

Video of flooding at the Houston City Hall annex parking garage from Aug. 27, 2017, during Hurricane Harvey

After the Houston Fire Department started reporting incidents of first responders almost descending into flooded areas while using their elevator override keys during emergency operations, the city added a code provision requiring flood sensors to its 2003 building code. The sensors are still required in the 2012 building code.

There is a proposal by the Regulatory Affairs Code Development Committee to expand that provision, Jones said. If it passes this year, the regulation would require a device to prevent an elevator car from descending into any flooded areas.

Why This Isn't So Simple 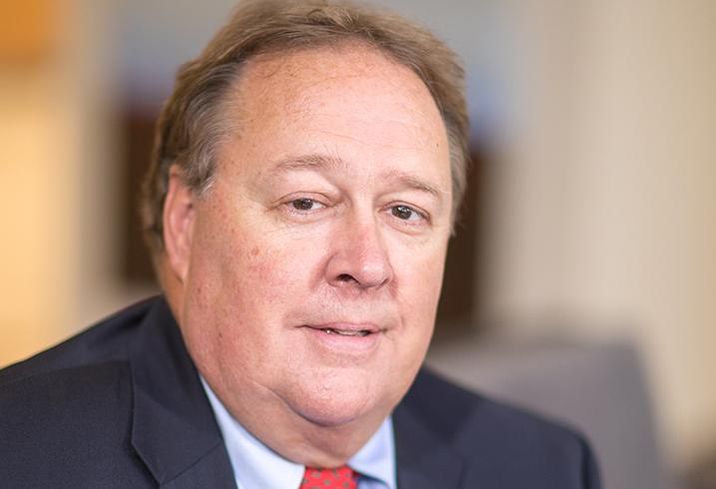 Water-detection devices may seem inexpensive at around $350, but often there is a decent amount of engineering involved, Isabelle said. A detection system that costs a few hundred dollars could end up being a few thousand, once a contractor gets involved.

“There’s always interest [in water sensors] after a flood; then they look at the cost and say, ‘Well, maybe it was a one-time thing.’”

The engineering behind them can be tricky, too.

“It’s not as simple as just putting a sensor in,” NEII's Brinkman said.

Sensors have to be compatible with existing systems, and it is important that they don’t override other safety features, such as ones designed to bring an elevator to a ground-level floor during a fire or earthquake. A flood sensor would indicate a need for an elevator to rise to a higher-level floor.

“It would be a pretty rare occurrence to have a fire and flood in the same building, but if that did happen, you’d have to have the right provisions so that you don’t take away one system in favor of the other,” Brinkman said. “We have to make sure that the requirements are compatible with each other, and we don't sacrifice one type of safety for another.”

ASME updates the elevator code on a three-year cycle, looking for ways to enhance safety and account for technology changes. After the codes are updated, states and local authorities have the option to adopt the model codes. Adoption is not mandatory, and some jurisdictions may choose to make modifications. Generally, existing elevators are grandfathered in, so even when codes are eventually adopted, they will not need to be followed until the property owner makes building modifications.

In Canada, there are 10 jurisdictions that enforce elevator code — one for each province. In the United States, there are 120, Isabelle said.

“If you look back at New York City at the turn of the century, around 1900 or 1910, 1920, the city would say ‘Well, we’re different than the rest of the U.S., so we need to have different rules and regulations,’ and there’s a committee created. Then someone in Boston says, ‘Well, we also have tall buildings, not as tall as New York City, so we should have our own rules,'" Isabelle said.

“It sounds confusing to the person that’s not familiar with it, but in reality it’s not,” he added. “The biggest driver in code changes is technology.” 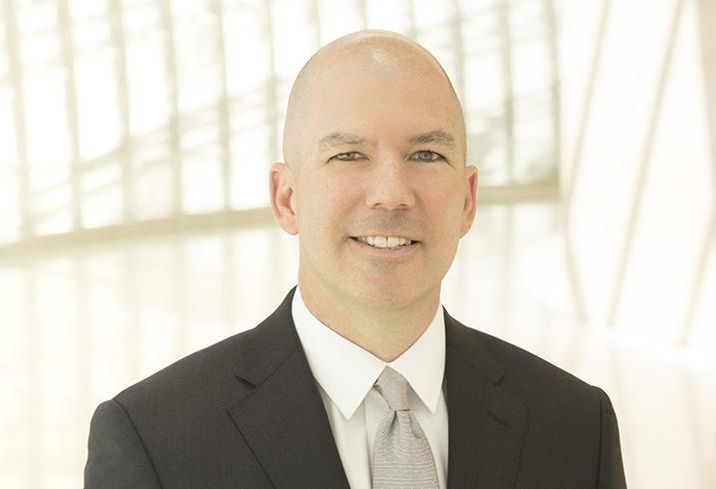 In June, the family of Jill Renick filed a lawsuit against the Omni and against Otis Elevators, National Elevator Inspection Services and American Elevator Inspections. The Omni Houston Hotel had been closed since Hurricane Harvey in August 2017 until it reopened after a $30M renovation in November 2018.

The lawsuit included allegations that the flood detection systems Houston requires were not installed.

“They’re not prohibitively expensive, and for building owners and managers that may have flooding occur, this is a tool available to them that might help provide safety,” said Crain Lewis Brogdon partner Rob Crain, who is representing Renick’s family.

All seven inspections on the traction passenger elevators at the Omni failed in April 2017, either by immediate rejection or conditional approval, citing repairs needed. Inspections on both hydraulic elevators also failed, according to the city of Houston.

The elevator Renick would later travel in was given immediate rejection by American Elevator Inspections, due to an inoperative door restrictor. It was to be sealed out of service until repairs were made.

No other records were available for the Omni's elevators from April 2017's failure until August 2018, according to the city of Houston after Bisnow's filing a Texas Public Information Act request.

The Omni did not respond to requests for an interview. A representative from Otis Elevators declined to comment.

“We believe that the elevator company and the company that was responsible for inspecting the work done on this elevator did not properly read the codes,” Crain said. “One of our concerns is that there may be other buildings and hotels that do not have flood sensors when they are required to do so.”

“We just want folks to study up and see if this is something that would be helpful in their buildings going forward.”