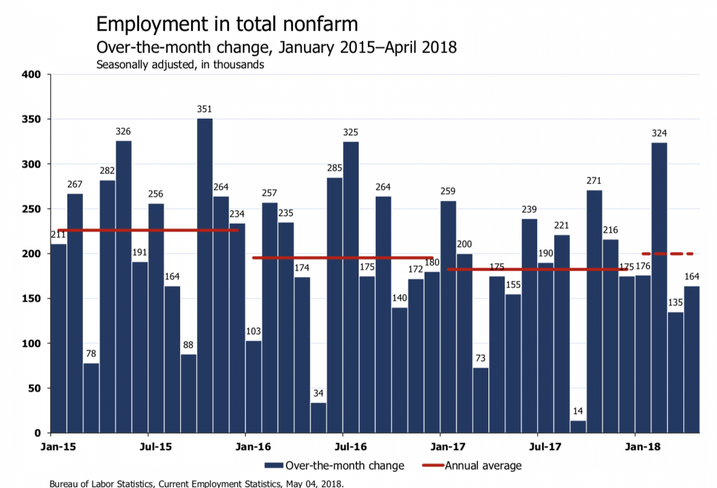 One economist called the jobs report "relentlessly, boringly, predictably good news." Another pointed out the dip below 4% was more the result of a shrinking labor force than jobless workers being hired.

Following are additional reactions from economists and others on Twitter.

Jobs report looks more moderate than strong. Unemp rate at 3.9% but this mostly due to tick down in labor force. Emp gains, at 164,000, slightly below expectations; Wg growth grew 2.6% for 3rd month in row; lack of acceleration one indicator that some labor market slack remains.

Nominal wage growth continues to fall short, rising only 2.6 percent over the year. This is clear evidence that despite the low unemployment rate (3.9 percent) the economy is not yet at full employment.

An important puzzle right now is how to reconcile increasingly convincing anecdotes of rising wage pressure, with quite comprehensive data that barely see any evidence of it.

164K jobs is perfectly good, pace YTD is 200K—faster than the 182K last year. Unemployment of 3.9% is positively exciting. But the ~150m people with jobs care most about wages and up 2.6% in last 12 months is pretty disappointing.

U.S. adds 164,000 jobs in April, unemployment rate falls to 17-year low of 3.9%. First time below 4% since Bill Clinton, but it doesn't look quite as good under the hood https://t.co/FjjHs0LS2i pic.twitter.com/zkbwxTL1xM