The unemployment rate fell to 3.8% after rising to 4% in January. 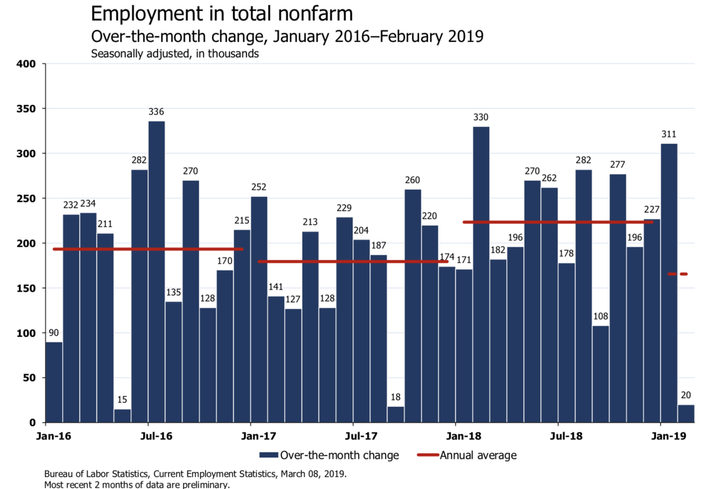 Construction employment declined by 31,000 in February after an increase of 53,000 jobs in January. The construction industry has added 223,000 jobs over the year, according to the report.

PEOPLE! Yes only 20k jobs were added in February but please do not start freaking out about a recession. One month does not make a trend. One reason for the February weakness was harsh weather, depressing job growth in construction, hotels, and restaurants. #JobsReport

Part of that flat jobs growth is because construction (-31,000) declined while business and professional services (+42,000) and healthcare (+21,000) continued to go up. #JobsReport

On the weather story - job growth was weak all round. It was only 20K if you exclude weather sensitive sectors, down from 162,000 in those sectors the previous month. pic.twitter.com/PlOeu6IbDs

So is job growth slowing?
Given that the revisions for December and January were upwards, I don't think we have much evidence of slowing yet.
But wages are rising, yet labor force participation growth stalled.
We can't have more employment if people don't take the jobs.

Today's #JobsReport of only 20k new jobs requires consideration of the following:
1. An absence of the federal E-Verify system probably lowered Feb data. An upward revision likely
2. The three month average of 186k in line with our estimates below
3. Wages up 3.4% vs 3.2% in Jan https://t.co/CHPTs9hAvG

Inflation is 1.6%, so we are seeing strong wage growth even after adjusting for cost of living. https://t.co/AI2IdIRl4B #jobs

Manufacturers added just 4k workers in Feb., pulling back from 21k in Jan. and the slowest monthly pace since July 2017. The sector has added 20k workers per month over past 12 months, and the labor market remains tight overall. I would expect an upward revision, or rebound. pic.twitter.com/TgzKitUhVW

My bottom line: Lots of reasons not to get too worried about one weak report, especially given all the one-off factors this time.
BUT, the job market had been rock-solid amid signs of cooling elsewhere in the economy. That's a bit harder to say after today. https://t.co/W6TmnH8oOh