Data Doing Right In The Southeast 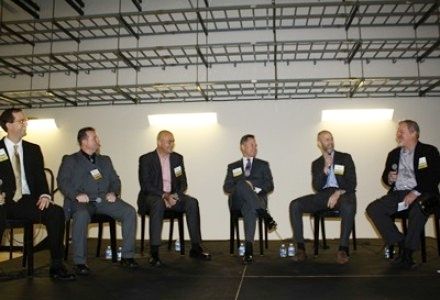 Many of our all-star panelists at the Atlanta Data Center Summit (Sutherland's Rob Plowden, PEER 1's Blake Clark, Carter Validus' John Regan, T5 Data Center's Tim Bright, Internap's Drew McBath, and DPR Construction's Jeff Mason) say the big prospects are back out in the market, especially wholesale users. Typically, Atlanta was a town where the average user didn't need more than 500KW of power. "Recently, we've seen a fair number of requirements coming out that are in excess of that," reports T5's Tim Bright. (That's a lot of hair dryers.)

Equipment efficiency is making the price point of bandwidth come down for operators, even as power pricing remains constant. Jeff (left, next to Tim) says the "price-point struggle" means that efficiency needs to be built into the design of the data centers. "We're no longer 'building it and they will come,'" he says. Instead, newer data centers are often designed for a certain user in mind. And as space runs out in cities and costs continue to escalate, John says that more companies will look to locate data centers in less expensive rural areas. (Deer don't usually bother data centers.)

Timothy (right, with Nodecom's Joe Suppers) says managed service is becoming more popular, especially as companies switch to the cloud. He adds that for now, Downtown Atlanta will continue to be the focus of connectivity to the metro area, because Marietta Street is raised with plenty of space underground for all the fiber (even some tunnels, apparently). He reports that a company is wiring a submarine fiber network (which sounds like a Tom Clancy novel) into Jacksonville that will eventually connect into his property at 55 Marietta, adding even more international bandwidth to the metro area.

"Stop thinking about what we did five, seven years ago. Frankly, that world is gone." Those words from AT&T's head of innovation Roger Mahler to data center operators came through crystal clear. He says companies like AT&T don't concern themselves as much with the exact location of a data center but in how all that data can be analyzed and put to use. "Do I care if it's in Atlanta or if it's in NY? No. I just want my data," he says. (We feel the same way about Cracker Barrel. It's just nice to find one wherever you are.)

SunTrust Bank's Jeff Dennes says the banking industry is just getting its head wrapped around the technology problem when it comes to gaining new customers. Up to 30% of US consumers don't have a bank account, he says, but they're still doing some form of financial transaction, like PayPal. And banks lost out on that. Banks are constantly going to Palo Alto, looking for startups and knowledge, he says. Jeff also says banks are rich with consumer data, but fear leveraging it due to privacy outcries. (For our thoughts on this, just secretly read our e-mails. It'll save us both time.) However, he calls on banks to do so to "provide a better experience" for customers.