Developers Aren’t Sweating The Drying Up Of Foreign Capital In U.S. Real Estate

Commercial real estate is riding a wave of economic expansion, but, even though a familiar source of capital has receded, U.S. developers aren’t ready to hit the panic button.

Chinese investors, a driver of U.S. trophy asset pricing in recent years, reversed course in Q2 and became a net seller for the first quarter since 2008. The investor bloc sold nearly $1.3B in U.S. assets while only buying $126M during the time frame. Even though the group appears to be retreating, developers say foreign investment still wants to be in the U.S.

“There is no shortage of money anywhere, and it can often surprise you,” AllianceBernstein co-head and co-Chief Investment Officer Brahm Cramer said at Bisnow’s National Real Estate Finance Summit event Thursday. “We’ve lost deals in Savannah, Georgia, on a Class-B office to a Chinese buyer or Cleveland industrial space that went to a Dutch buyer.”

Chinese investors have pushed U.S. real estate prices up in recent years with record-setting acquisitions like Anbang Insurance Group’s $1.95B purchase of New York’s Waldorf Astoria Hotel, the highest price ever paid for a U.S. hotel. Chinese conglomerate HNA Group was behind one of the biggest office building sales in U.S. history when it purchased 245 Park Ave. from Brookfield in 2017 for $2.2B.

The company has since faced pressure from the Chinese government to sell assets to pay down debt, and it is said to be part of a greater investor trend that might make sky-high outlier sales prices a thing of the past. It has put 245 Park on the market and is widely expected to take a loss on the property when it decides to sell.

“When we talk to our investors, they still like New York, but some are looking at New York and ask if they’re getting in at the right entry point,” RXR Realty President and Chief Financial Officer Michael Maturo said. “There is still interest, but I certainly think it’s more refined.”

A combination of escalating trade tensions with the U.S. as well as tighter regulation on citizens making foreign investments has led to Chinese companies unloading U.S. assets.

Even Anbang, which was taken over by the Chinese government after the company’s chairman was convicted of corruption, is reportedly looking to sell up to 15 luxury hotels, but not the Waldorf, but New York developers aren’t deterred.

“The Chinese bid has clearly left the market,” SL Green co-Chief Investment Officer David Schonbraun said. “But there is a significant amount of foreign capital that isn’t talked about like the Chinese. Tens of billions of dollars in deals will still get done in New York this year.”

Panelists at the event unanimously highlighted the strength of the U.S. economy and regularly mentioned it remained a top destination for foreign capital. While there may be a decline in Chinese investment, the country is still one of the largest sources of foreign investment in U.S. CRE. Canadian and Chinese investments have accounted for 39% of all foreign investment in U.S. CRE since 2015, according to Cushman & Wakefield.

Despite the Chinese slowdown, Canadian investment has recovered from a slowdown in 2016. The C&W report emphasized rising interest rates in the U.S., a stronger dollar and the improved economic status of other countries could continue a drop in overall foreign investment in U.S. real estate, but those at the event weren’t deterred.

“The investment sales market has been off [the] last two to three years, but that was a relatively astronomical peak it hit a few years ago with the influx of foreign money,” Moinian Capital Partners Managing Director Jonathan Chassin said. “The macroeconomic trends are generally healthy. The U.S. economy is doing extremely well, office rents are growing and corporate earnings continue to hit new highs.”

See more from the National Real Estate Finance Summit in the slideshow below: 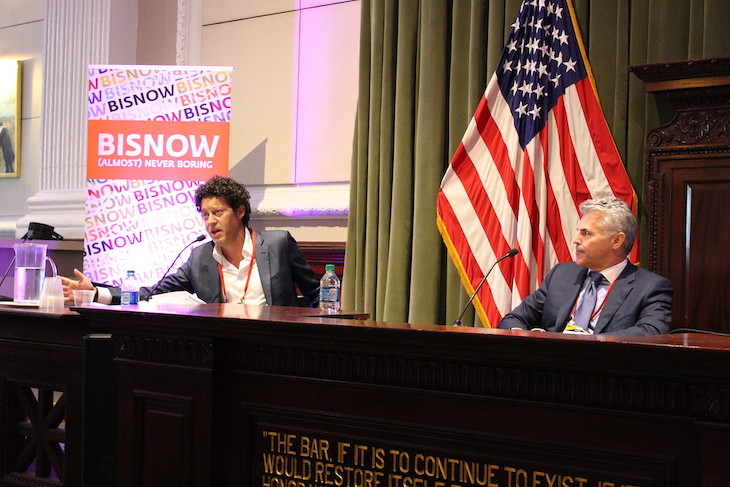