BB&T, SunTrust Banks To Merge In Biggest Such Deal Since Recession 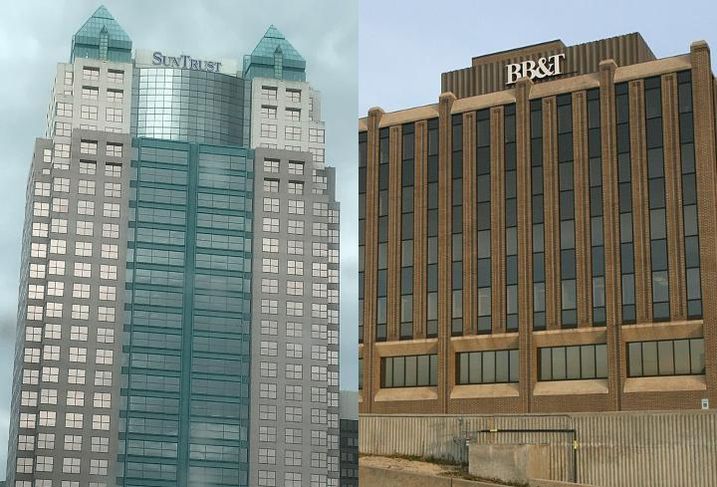 Two East Coast banks are coming together in the largest merger between American banks since the Great Recession.

BB&T Bank and SunTrust Bank will combine in an all-stock deal billed as a "merger of equals," Reuters reports. The new company, which will be valued at an estimated $66B when the merger closes in the fourth quarter, will locate its headquarters in Charlotte, North Carolina.

The as-yet-unnamed company will continue operations in what are currently each bank's headquarters — SunTrust's Atlanta home and BB&T's in Winston-Salem, North Carolina. Those two buildings, along with multiple towers, sports arenas, music venues and hundreds of branches up and down the East Coast, will all presumably change names soon after the deal is finalized.

When combined, the two banks will bring together $442B in assets, $301B in loans and $324B in deposits, Reuters reports. It is the first of what many experts predict to be several major consolidations in the banking industry in the wake of the Trump administration's loosening of post-Great Recession regulations. For years, banks with over $50B in assets were subject to much tighter regulations, making rapid expansion all but impossible, according to Reuters.

With the looser market, the likelihood of more major bank mergers is greatly elevated, analysts told Reuters. As private capital floods the debt market, banks are forced to be more aggressive in hunting deals — aggression that is easier at scale.

The merger values an individual share of SunTrust as worth 1.29 BB&T shares (a 7% premium over SunTrust's closing price on Feb. 6, according to Reuters), and current BB&T shareholders will own 57% of the combined bank going forward. Both banks' stock prices rose slightly in the wake of the news.